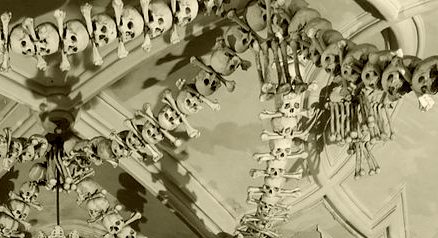 Islam is a charnel house. It was born in fire and blood and slaughter in the 7th century and has maintained the same modus operandi for the past fourteen hundred years.

When it is strong it wages aggressive jihad. It slaughters victims who refuse to convert. It takes slaves and distributes concubines to its warriors. It rapes and loots and destroys the wealth of civilized societies to feed its insatiable lust for booty and plunder, battening on the flesh of the prosperous. It reaps what it does not sow and harvests where it does not plant.

When it is weak, it goes into dormant mode. It turns its aggressive energies in upon itself, ferreting out blasphemy and unbelief and punishing the malefactors. Deprived of plunder, its cities fall into decay and desuetude. Poverty and degradation become the norm. The soldiers of Allah bide their time and await the moment when they may resume their rapacity.

With the emergence of the Islamic State in the Middle East, we are now moving out of a three-century hiatus of Islamic weakness into an era of renewed Islamic strength. What seems an unprecedented horror of bestial behavior is actually just a return to the Islamic norm as practiced before 1683 throughout the lands conquered by Islam.

All of the above is easily discoverable by any non-Muslim who cares to look into the matter. None of it is hidden. Yet the average Westerner is wearing a blindfold and earplugs when it comes to Islam. The arrant nonsense that is peddled by our media and our political leaders is swallowed by millions of people who should know better. And who could know better, if only they would raise a corner of the blindfold and take a little peek.

The political leaders and financial wizards who squat atop the pyramid of Western power know full well the reality of Islam. They have access to complete intelligence information on what the Great Jihad is doing, and what its long-term plans are. Cynical self-interest requires that they obscure the truth and lie to the populace.

The same cannot be said for all the millions of gutmenschen who go along with the feel-good multiculti program. These are decent, well-meaning people — I know quite a few of them personally — who believe the official lies and accept the unexamined premise that Islam is essentially a good, peaceful religion similar to Christianity and Judaism. They may be subliminally aware of mounting evidence to the contrary, but manage to screen it out to maintain the structure of a deluded worldview that becomes more and more untenable every day.

How did this come about? How did Islam become the whited sepulchre that it is today in Western popular culture? What keeps filling the buckets and dipping the brushes to maintain the paint job?

There are no simple answers to these questions. This is the first of an occasional series of posts that will highlight our capacity for mass self-delusion by examining some of its manifestations.

What’s in a name?

Many Canadians are familiar with the name Marc Lépine. It was chosen by a man who went on a killing spree at the École Polytechnique de Montréal on December 6, 1989. Mr. Lépine murdered fourteen students and wounded another fourteen before killing himself.

Most people, however, have never heard of Gamil Rodrigue Liass Gharbi, which was the name given to Marc Lépine when he was born. His father was an Algerian, but the murderer’s Muslim background was rarely mentioned at the time of the massacre, and is still generally unknown.

The case of Marc Lépine serves as the prototype for media coverage of vile acts committed by Muslims or people of Islamic background. If a violent criminal has two names, one Muslim and one non-Muslim, only the non-Muslim name will be used in media reports about the perpetrator’s evil deeds. John Allen Muhammad, the elder of the Beltway Snipers, is a case in point. After he was apprehended back in the fall of 2002, the media avoided mentioning his conversion to Islam and used his birth name, John Allen Williams, for as long as they could get away with it.

This phenomenon is especially noticeable when the perpetrator is a convert to Islam. Media reports will use the birth name of a killer and eschew his jihad cognomen whenever possible, even when his name has been legally changed. If the Islamic name is ever mentioned, it is relegated to back pages of the newspaper and the bottom of news articles, and is scrupulously omitted from the headlines.

The practice has become so noticeable and ubiquitous that it deserves its own name: Vlad’s Rule, after Vlad Tepes, who first pointed it out to me:

A Muslim convert who commits violent crimes will be identified by his non-Muslim name in all news stories.

Below is a list of converts to Islam whose names have figured prominently in recent news reports:*

All of the above converts are commonly identified in the media by their birth names, rather than their Islamic names — with one exception.

Can you guess what the exception is?

Yes, you’re right: Peter Kassig is generally identified as “Abdul-Rahman” in news stories. Secretary of State John Kerry and President Barack Hussein Obama established the trend by referring to “Abdul-Rahman” the day his beheading was first made known. For a few hours after the news broke, media outlets tended to use the name “Peter”, but most eventually fell into line.

The reversal of the usual procedure is explained by the fact that Peter Kassig is an identified victim. This makes the use of his Islamic name all but mandatory. In ludicrous contrast, Mr. Kassig’s murderer is commonly known as “Jihadi John”, as if to distance Islam from the executioner’s function as a serial beheader.

This has prompted a Corollary to Vlad’s Rule:

A Muslim convert who is the victim of violent crime will be identified by his Muslim name in all news stories.

This insane practice reached its absurd apogee in a flip-flop report for the BBC, where the victim was identified by his Muslim name, while the perpetrators were listed under their Christian names, in a single news article:

France has named a second Frenchman in a video showing the killing of Syrian prisoners by Islamic State (IS) militants as Mickael [sic] Dos Santos, 22.

The Muslim convert comes from an eastern Paris suburb. The other French militant was named as Maxime Hauchard, a convert from Normandy.

In the same video, the severed head of US hostage Abdul-Rahman Kassig was displayed for the camera.

This is the intricately knotted pretzel into which the Western media have contorted themselves in order to maintain the pristine purity of the whited Islamic sepulchre.

Once again, we are prompted to ask: What maintains the snowy scrim that has been so skillfully placed between the Western public and Islam? How are so many people so easily fooled?

As I mentioned at the beginning of this post, we may assume that many of those at the pinnacle of our cultural elite are cynical and evil in their deliberate effort to mislead the populace. But thousands upon thousands of the lower ranks — call them the middle managers of the culture — believe all this claptrap themselves. How is that possible?

Mass insanity is one potential explanation. But we’ll be looking at other aspects of the same syndrome in later installments.

25 thoughts on “The Whited Sepulchre, Part 1”