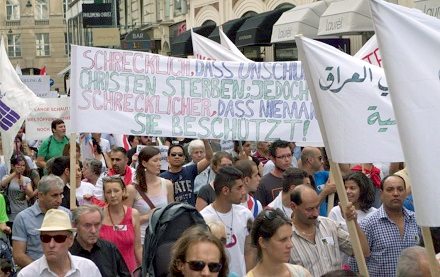 Two weeks ago we posted about the march in Vienna in support of persecuted Christians in the Middle East. Below is a subtitled video of a speech given by Christian Zeitz on that occasion, concerning the Koranic basis for the actions of ISIS and the nature of Islamic law. In addition to his translation of the video, Rembrandt Clancy has provided us with an explanatory introduction. 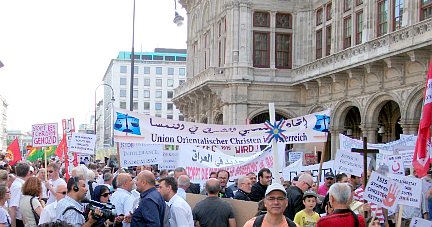 Below is a video of a demonstration against the “Islamic State” which took place in Vienna on 10 August 2014. The speaker is Christian Zeitz, Scientific Director of the Institute for Applied Political Economy in Austria. According to Internet portal unzensuriert.at, where he has published guest commentaries, Mr. Zeitz studies the theory of democracy, monetary theory, Islamology and the sociology of religion.

Mr. Zeitz raises two subjects in the video for which it is perhaps worthwhile to provide some background: the Ridda wars and the Austrian Islam Act of 1912.

Abu Bakr al-Baghdadi, the current IS leader and self-proclaimed Caliph, takes his name from Abu Bakr al-Siddiq, who according to tradition was an early friend of Mohammed’s. Upon the prophet’s death in 632, Abu Bakr became the prophet’s “rightly-guided” successor and the first Caliph. It was he who sponsored the Ridda or Apostasy Wars until his death in 634. The aim of the wars was to re-establish Muslim hegemony over Bedouin tribes on the Arabian Peninsula after they had fallen away from the faith. Raymond Ibrahim describes these first jihads this way:

Many Arab tribes were still willing to remain Muslim, but had second thoughts about paying zakat money to the first caliph, Abu Bakr. That was enough to declare jihad on them as apostates; tens of thousands of Arabs were burned, beheaded, dismembered, or crucified, according to Islamic history.

Indeed, Qaradawi himself, while discussing the importance of killing any Muslim who apostatizes from Islam on a live Al Jazeera program, correctly declared that “If the penalty for apostasy was ignored, there would not be an Islam today; Islam would have ended on the death of the prophet.”

The Austrian Islam Act of 1912

Christian Zeitz also refers briefly to the Islam Act (Islamgesetz) of 1912 (English, French and German versions), which the Emperor Franz Joseph (1830-1916) promulgated for the purpose of integrating Bosnia-Herzegovina into the Habsburg Monarchy. In a recent article for Gates of Vienna Mr. Zeitz details the background to the Act and outlines what is at stake:

Austria will soon have to decide whether it wants to establish in orderly fashion the primacy of the secular state versus the aspirations for an Islamic divine state, or intends to allow a further embedding of radical variants of Islam.

The Gatestone Institute has an article “Austria: Muslim Brotherhood’s New European Headquarters” (4 June 2014) which analyses why Austria’s Islam Act of 1912 provides attractive, external legal conditions for the Muslim Brotherhood that do not exist in any other European country.

Henrik Ræder Clausen did the technical work on the original footage. Elisabeth Sabaditsch-Wolff supplied the German transcript, without which this project could not have gone ahead. She was also responsible for taking the video footage of the demonstration. Translation and subtitling are by Rembrandt Clancy.

… devote a significant part of their free time in the service of this solidarity.

An outward gesture is very important for Austrians and the people of this city.

But it is also very important to speak truthfully about what is behind these massacres occurring right now in Iraq and in Syria and in the entire Near East.

Dear friends, we know that not only Christians, but also Yazidi, Shiites, and Alevi are affected by it; but that does not change the fact that it is inaccurate to label, as so-called “Islamic terrorists”, those who are acting here with tremendous violence, with bloody violence. They are nothing less and nothing more than people very concretely guided by central passages in the Koran. And we should not forget that ladies and gentlemen.

It is inaccurate what we are continually given to understand: that ISIS and their allies are acting contrary to the Koran and to the teaching of Islam. They are doing anything but that. And it is no accident that he who had himself proclaimed the new Caliph calls himself Abu Bakr al-Baghdadi.

You all know who Abu Bakr was. He was the first so-called “rightly-guided” Caliph, the immediate heir and successor of Mohammad. He launched the Ridda Wars, wars in which people who had already partially converted to Islam, but who did not wish to pay tribute, were slaughtered in the most brutally violent way so as to subjugate them: they massacred Christians and Jews, who as dhimmis, were to be subdued. You know, ladies and gentlemen, what is meant by a “dhimmi”: a so called “protected people”, subjugated to a religion of the book; it is someone, who is prepared to recognise the dominance and interdict of Islam for a certain time period and pay the jizyah for it, the protection tax, because otherwise he will have to be killed if he does not pay it.

And it is precisely that which these ISIS people are now doing every day. They present purported unbelievers with the alternatives: either convert to Islam or else choose death. That is what we currently have to witness every day in Iraq. And in that there is nothing which is incompatible with the Koran and nothing incompatible with Islam.

Let us not be blinded by that which we hear in the propaganda-media, and by what we hear every day from the diverse propaganda of Muslims. And unfortunately, the mainstream media, the Western media, have done just exactly that [blinded us].

Therefore we must speak the truth.

Once more, dear friends; … dear fellow Christians; … dear sisters and brothers! We must of course take if for granted that many, many Muslims likewise suffer under this regime. Of course many Muslims stand with us in solidarity.

And therefore it is a basic precondition for a regime of dialogue, for a genuine cooperation, that Muslims and their representatives, the Imams world wide, distance themselves from these suras and from these Koran verses. That is the first prerequisite for the existence of justice and peaceful co-existence. Let us tell that to everyone who is unaware of it!

And therefore, ladies and gentlemen, let us demand that the Islam Act [1912] which is currently under review; namely its amendment, contain the disclosure of the tenets of Muslim belief. It cannot be that Islam is a legally recognised religion in Austria, and in truth… And it cannot be that we are up against a legally recognised religion, which, by virtue of its secret language, High Arabic, refuses to disclose itself; and then we say, that the Koran cannot be translated. That cannot be the case in a democratic state, not in the Republic of Austria.

Let us declare our solidarity, with all our might, with all our energy, with our Christian brethren in the Near East; but also let us show solidarity with those in Austria who must ensure that jihad does not reach our country, and that Sharia does not become a component of Western culture, for it does not belong here.

We are all Nazarenes.

13 thoughts on “ISIS: Guided by the Koran”