One of the last acts of the Austro-Hungarian Empire before it disintegrated in the aftermath of the Great War was to pass the “Islam Law” of 1912, which codified the religious rights of Muslims. The law was deemed necessary because of the participation of Muslim soldiers in the imperial army after the annexation of Bosnia in 1908.

Modern Austria has inherited the Islam Law, but Islam-critics have long contended that the state has failed to enforce the crucial provision that Islamic practices must not violate the laws of Austria. After years of contention, a revision of the Islam Law is in the works, and — not surprisingly — has stirred new controversy, since Austria’s increasingly powerful Islamic community has had a say in the detailed provisions of the revised law.

Elisabeth Sabaditsch-Wolff has commissioned translations of an introduction to the public controversy about the law, followed by an article about these unfolding events.

For readers who are interested in the text of the original law, see the Islam Law of 1912 in German, French, and English.

Many thanks to JLH for translating this comprehensive introduction by Christian Zeitz:

The completely unrestrained expansion of Islamic influence has long been a thorn in the flesh of Islam critics in Austria. More and more aspects of everyday life are subsumed by the ritual demands of believing Muslims and — frequently in a bizarre fashion — make a beneficial exchange between native Austrians and Muslim immigrants impossible. The left and like-minded political elite are working diligently on a glorification of alleged Islamic cultural achievements, in order to legitimize their claim of “enrichment” of a multicultural society with foreign influences. Economic and political ties between Austria and influential Islamic countries — especially Turkey and the Arab oil-producing countries — are being unremittingly intensified, and this increases their influence on Islamic institutions in Austria. The out-of-control proliferation of so-called Islamic “cultural organizations,” i.e., the multiplicity of oriental convenience stores and video stores run by “backyard mosques” provides a comfortable insulation for the creeping propagation of sharia. And in Austria, all that may no longer be criticized and opposed — even with qualifications — because Islam is a “legally recognized religious community” under the protection of the criminal religious “hate speech paragraphs” in the law and the anti-discrimination legislation.

In 1912 Islam was recognized as a legally equal religious community through a special law called the “Islam Law.” The step was considered necessary, because of urging by Bosnian soldiers belonging to the imperial-and-royal army of the dual monarchy of Austria-Hungary at that time. Of course, the Islam Law provides the qualification in §6/2 that protection of Islam applies only insofar as its beliefs, rituals and practice do not contradict the laws and customs of Austria. In 1988, by means of an ordinance considered by experts to be illegal, the legal basis was created for the IGGiÖ (Islamic Religious Community in Austria), which gives Islam exclusive claim to representation. The IGGiÖ has established itself as a powerful and politically influential lobby, which pursues Islamic interests in all areas, exploits naïve representatives of the political establishment and ensures a centrally coordinated religious instruction in public schools. Its advocates belong to a radical — albeit set up as “dialogue” — type of Sunni Islam, and see themselves as a toehold for Turkish and Wahhabi positions.

For more than100 years, politically responsible individuals in the Austrian republic have not succeeded in implementing the provisions of the Islam law or enforcing its spirit. For that reason, critics have long demanded a reformulation of the law, restricting the leeway of interpretation, emphasizing the interests of Austria, preventing an extra-legal status for Islam and creeping sharia — as it is or should be in a nation of laws for all churches and faith groups.

Unfortunately, the IGGiÖ has realized that the implementation of such a legal project would mean the end of its time of doing as it pleases in Austria. So — in complete secrecy, behind the backs of the public, enlisting the responsible foreign minister, Sebastian Kurz and several policymakers — it has taken the opportunity to finagle an outline of a new Islam Law that would even enhance its position, increase the influence of Islam on both culture and society, and could mobilize public money for Islamic projects like special cemeteries and ministry to soldiers.

So for several weeks now, critics and juridical experts have been trying too prevent an unnoticed rubber-stamping of this proposal in the Austrian national Assembly. They are letting those in power know that such a legal construction would clearly discriminate against the other religious communities in comparison to Islam and its radical representation, and would diminish surveillance of extremist groups and projects. It should be the intent of a constructive Islam Law to preserve the interests of Austrians and establish religious peace in the land. The following central elements must be considered:

Austria will soon have to decide whether it wants to establish in orderly fashion the primacy of the secular state versus the aspirations for an Islamic divine state, or intends to allow a further embedding of radical variants of Islam.

Below is a article from EurActiv.de (also translated by JLH) with a different perspective on the revision of the Islam Law of 1912:

A revision of the so-called Islam Law — stemming from the year 1912 — is being readied. As early as this year, therefore, a legislative act could be put in place, which could serve as a model for other EU states. 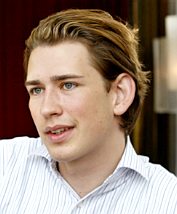 The Cultural Office, located in the office of the Chancellor, is responsible for the preparation of the Islam Law. Pro-active in this is Sebastian Kurz, who is responsible not only as Minister of Foreign Affairs but also as Minister for Integration. It is clear to him that the time has come for “a new law.” It should, above all, take precedence in federal law. Beyond criminal law, a new Islam Law offers an opportunity to explicitly regularize certain points. “For instance, that religious instruction may not contradict civic education” and that “one may bury relatives in accordance with their faith.” Another important point concerns minimum standards for pastoral care in hospitals, in the army and in training of imams.

A Unique but 102-Year-Old Body of Laws

As far as official recognition of Islam as a religious community is concerned, Austria has a kind of prototype function for Europe. As early as 1878, when Austria-Hungary was empowered to administer Bosnia and Herzegovina, Emperor Franz Joseph I proclaimed “that all sons of this land enjoy the same right under the law, that they will all be protected in their lives, faith and worldly goods.”

Immediately after the annexation of Bosnia in 1908, the process of granting Islam legal recognition began. The ministries involved created a body of laws unique in Europe at that time. In it, Muslims are granted autonomy and self-determination, “but governmental supervision is maintained.” It was confirmed that the religious community and its religious functionaries in accordance with Hanafite ritual enjoy “the same legal protection as other recognized religious communities.” That also applies to the teaching of Islam, its institutions and customs, “to the extent that they do not contradict government law.”

The Battle over the Cross in the Classroom

There is no doubt that the Islam Law stemming from1912 — ergo instituted during the Danube Monarchy — has become superannuated. At that time, there were 900 citizens of the Muslim faith. One hundred years later, according to information from the Islamic community in Austria — an officially recognized body — more than 500,000 profess Islam (while 5.36 of the 8.5 million Austrians are Catholic). They are highly concentrated in the capital city, Vienna, where Bosnians may outnumber Turks.

The dimension achieved by discussions concerning religious groups is seen here in Vienna. Presently, a survey is being made in the compulsory schools to determine the actual percentage representation of different faiths. The impetus for this was a dispute when parents protested the ordinance that a cross must be hung in a school when the majority of children are Christian.

No Contradiction to Civic Education

The intention of the Islam Law is to take the wind out of the sails of especially the right-populist FPÖ, which once fueled a smear campaign against Turks, Bosnians, etc., with the slogan “Daham statt Islam.” (Homeland not Islam). With the emplacement of a “priority of implementation for national law,” the ruling parties hope to clarify the situation. Then, no one could be put outside the country’s laws for invoking Islam. Religious instruction would not have to come to a halt and training of imams would be raised to the university level. Finally, two sensitive questions remain to be discussed. First, which Islamic sects will be recognized in law. Second, whether a religious community will be financed inside Austria or (extensively) supported by funds from abroad.

8 thoughts on “A Brand New Islam Law for Austria”