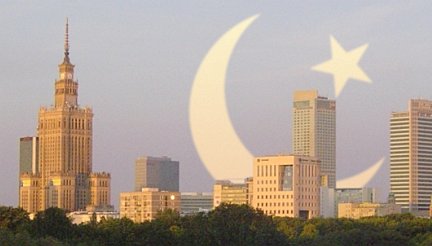 The Islamization of Poland seems to be proceeding much faster than I ever expected — and probably to the surprise of most Poles.

Our Polish correspondent Green Infidel sends the following translated report on the latest official oppression of “Islamophobia” in Poland. He includes this introductory note:

It seems that in Poland, Western-style “hate-speech” laws are being rapidly enforced — perhaps helped by a Communist-style mentality still present in much of the police and prosecutors’ offices.

Here’s one victim — the owner of a Jihad Watch-style portal, reposting news articles about the “Islamisation of Europe”, mostly from Western media.

The police promptly took away his computer and laptop for examination, he was questioned about his “attitudes towards believers of Islam”, and even donors to his website received visits from the police!

One wonders whether the commenters, and over 150,000 Facebook users who “liked” his page will also receive visits?

On the 23rd of July [2014], the police carried out a search of my apartment and secured a PC, as well as my mobile phone with its SIM-card. However, this is not the first time when I’ve been the target of political correctness and pseudo-intellectual elites.

My legal problems commenced at the start of September 2013 — when I received a letter from the same prosecutors’ office, which is currently leading the investigation against me. At that time, I was accused of inciting hatred during 2012-2013, and insulting a group due to its faith. This is an charge from article 256§1 of the Polish penal code, and 257§ in relation to article 11§2 of the Polish legal code.

The prosecutors’ justification was as follows: “Damian Kowalski, inciting through the internet to hatred of the followers of Islam, requested donations to support his actions to the bank account number: …”. After a few days, I was forced to present myself at the prosecutors’ office and submit a statement in the presence of my lawyer, I was questioned about everything to do with the functioning of the website [www.ndie.pl].

A month later I received a statement that the process was being dismissed, as it transpired that nowhere did I personally insult Muslims. The person who reported the website, in the opinion of the prosecutor, “over-interpreted” the contents on the page “No to the Islamisation of Europe”. I decided at that time not to announce this case anywhere, as the case was dismissed, and I concluded that there will not be further misunderstandings — yet I was wrong. When the police searched my apartment on the 23rd of July and secured my work equipment, I understood that I cannot remain silent further, especially given that a close colleague of mine was summoned to the police station, to serve as a witness.

If the facts do not agree with the official version — then more bad for the facts — this assumption was used by the enemies of our initiative. One of them, the editor “Jas Kapela” — who works closely with the Gazeta Wyborcza newspaper [Poland’s biggest-selling, liberal Polish daily] and “Krytyka Polityczna” [a far-left group with close links to, among others, Antifa in Germany], who launched many actions in the prosecutor’s office against “No to Islamisation of Europe” — has undoubtedly also played a role in the present proceedings. Unfortunately, it’s not only him. Sadly, I must conclude that hateful comments by some readers also played a significant role in the proceedings. The editors did not manage to delete them before the functionaries of cultural Marxism (commonly known as political correctness) could get to them. In relation to this, I appeal for us all to retain civility in our comments.

However, what makes me wonder, and concerns me the most, is that the prosecutor wishes to know my “opinion about the followers of Islam”. One could get the impression that independent thought and holding one’s own opinion, which is not enforced from the outside, can be a reason to start a penal process, which is an evident absurdity and means to cause problems for independent media and movements. However, I do not intend to surrender without a fight, and I will continue my activities — to inform, along with others, about the danger carried by the experiment of multiculturalism and the process of the Islamisation of Europe. I will further remain opposed to Sharia law, which is contrary to Polish law. I will not be discouraged by any leftist with the mentality of a schoolchild, or the fact that I’m being pestered by letters from the prosecutor and visits from police officials.