Various nationalist and EU-skeptical parties scored unprecedented gains in the recent elections for the European Parliament. The ones that are anxious not to be labeled “racists” have gravitated towards the ECR (“The European Conservatives and Reformists”) group in the EP, rather than trying to forge any alliance with Geert Wilders (Netherlands, PVV), Heinz-Christian Strache (Austria, FPÖ), or Marine Le Pen (France, FN). Some of the parties that are allergic to these “far-right extremists” include UKIP, the Danish People’s Party, and the Finns.

But what if these dedicated EU-skeptics are being suckered? Is the ECR really the right group for parties that oppose mass immigration and want to exit the EU? 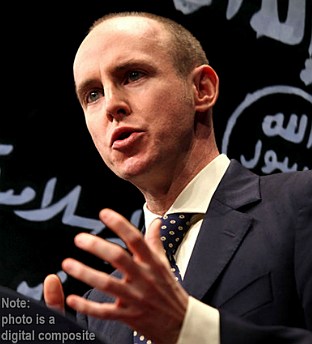 Dedicated Counterjihad activists are keenly aware that Daniel Hannan, a well-known British MEP for the Conservative Party, is no friend to our movement.

Mr. Hannan reminds me of Grover Norquist, a prominent Republican Party insider who is married to a Muslim, mentors various Muslims in the party, and is often rumored to have converted to Islam himself. Mr. Norquist is solid on fiscal issues and taxation — I read his column for many years in The American Spectator — but is no help to anyone who wants to stop the Islamization of America.

Daniel Hannan is a similar case. He, too, is solid on fiscal matters, and his expository videos (some of which have been posted in this space) are entertaining and instructive to watch. But when it comes to Islam, he is no help at all — and sometimes an active hindrance to those who would halt the Islamization of Europe.

Mr. Hannan is a founding member of the Conservative Friends of Turkey Association. In a 2010 op-ed for The Telegraph, he averred that “My party has been Turcophile since Derby’s leadership” (Edward Smith-Stanley, 14th Earl of Derby, was the longest-serving leader of the Conservative Party and died in 1869). He went on to say:

Cameron’s reasons for backing Ankara’s bid for EU membership are solidly Tory: Turkey guarded Europe’s flank against the Bolshevists for three generations, and may one day be called on to do the same against the jihadis. In the circumstances, he believes, the Turks are being treated ungratefully by their allies.

He’s right. The EU’s treatment of Turkey will one day be seen as an epochal error.

In an interview in 2011, Mr. Hannan discussed the “alienation” of “disaffected boys” as the cause of radicalization among Muslims in British society. He added that it “is our fault as well as theirs” for not offering these unfortunate young men better alternatives.

In an op-ed last October, he praised the Quilliam Foundation and disparaged the English Defence League.

More recently, after Paul Weston was arrested on the steps of Westminster Guildhall for quoting Winston Churchill on the topic of Mohammedanism, Mr. Hannan defended Mr. Weston’s right to free speech, but disparaged his “loutishness”, and described his behavior as “narcissistic”.

The above, in a nutshell, is what we have come to expect from Daniel Hannan, MEP. I bring all this up because of an email I received this morning from a contact in Germany:

I read in EurActiv.com that the group known as the ECR, which the Danish People’s Party and the Finns Party (the party of the newly-elected MEP Jussi Halla-aho) have joined in the European Parliament, is going to be led by Syed Kamall. You should alert your readers that he is a devout Muslim.

If you google Syed Kamall, you will probably find links referring to the fact that he is a devout Muslim and defender of Islam.

The kingmaker and second man of this group is Daniel Hannan. Dan is the guy who persuaded the Danish People’s Party and the Finns to join the ECR group.

Dan used to be a friend, but we fell out when I began criticizing Islam. He is a great admirer of Islam. He once told me that he had seriously considered converting to Islam, which he considered a beautiful and deeply spiritual religion.

I already knew about Daniel Hannan’s opinions and positions, but I had never heard of Syed Kamall. So I took my contact’s advice, and spent several hours this afternoon plugging his name into Internet search engines.

In 2008 Daniel Hannan said, “My fellow Euro MP, Syed Kamall, is a good Muslim: he keeps the fast, tries to pray five times a day and does his best to bring his sons up with a full understanding of his faith. But he becomes impatient when people try to drag him into arguments about Palestine, Kashmir or Iraq.”

Mr. Kamall has made similar statements himself, saying that he is a “practising Muslim” and “I try to pray every day.”

There is no indication that he is devout, however — not as the word is normally understood. He does not publicly promote jihad or a world Caliphate. He wears no beard. He does not quote the Koran or the Hadith during campaign appearances, as far as I can determine. He does not force the females in his family to wear hijab.

Nevertheless, his publicly recorded opinions and actions are supportive of Islamic interests in Europe.

Like his fellow Tory Daniel Hannan, Syed Kamall is a Turcophile. When interviewed by Weekly Zaman, he said that he favored Turkey’s entry into the EU, and responded at length on Turkey’s status in the Middle East, saying that “it’s a wonderful model”:

Would you say Turkey is a good model for the Middle East?

Personally, I think it’s a wonderful model. I’m not saying it’s perfect, and also if you are an extreme secularist you do not like what’s happened in Turkey at the moment, but on the whole I think there are still concerns, but that’s still all part of development. There are still concerns over human rights, women’s rights — things like that — in parts of Turkey, but I don’t think many countries have solved those problems.

I think it would be a wonderful model, but we have to be very wary in the West of trying to seem to impose a model in these countries. They have to develop in their own way, and as much as Turkey can promote the model they’ve gone through — that there is a political Islam that is moderate, that is secular, that is tolerant, that doesn’t stop people worshipping their faith but that actually doesn’t push it down the throats of those that don’t worship their faith — if they can get that right, there is no compulsion Islam message across and is [a] very liberal interpretation of Islam — when I say that I don’t mean anti-religious, I mean that there is no inherent contradiction between being Muslim and being tolerant to other faiths — they could also be a very good economic model for the development. Turkey shows that religion could be a powerhouse, but I can’t say that all countries should follow that model because each country has to find its own model.

At one point Syed Kamall echoed Tim Stanley that “Islam is way more English than the EDL” (but later deleted the tweet).

According to Yvonne Ridley, he was at one time on the “Muslim 100 power list”. On the other hand, according to MPACUK, he is a “Zionist” who “condones Israel”. So it seems that, like the Quilliam Foundation, he draws the ire of sharia-minded Muslims in Britain.

Significantly, Mr. Kamall was a co-signer of a letter from the Runnymede Trust to The Times [pdf] calling on Britons to affirm the value of immigration, to celebrate Multiculturalism, “to reject prejudice and intolerance, and to shape a fair and inclusive future that we all want to share.”

Is this the kind of EP leader under which EU-skeptical parties such as Dansk Folkeparti and Perussuomalaiset want to serve?

Yes, he’s not a “devout” Muslim. But he loves Turkey, pushes for “diversity” and “inclusiveness”, and wants his constituents to affirm the value of immigration.

Is that really so much better than the hard-bitten nationalism of Marine Le Pen? Or Geert Wilders’ staunch opposition to sharia?

I’m not European, so I can’t give an informed answer to that question. However… if I were an immigration-critical Finn or a Danish patriot, I’d think twice about stretching out my feet under the same table as Syed Kamall, Daniel Hannan, and the other European Conservatives and Reformists.