Our Israeli correspondent MC was prompted by certain recent comment threads here at Gates of Vienna to write the following analysis of what oil wealth has done for the Arabian peninsula. 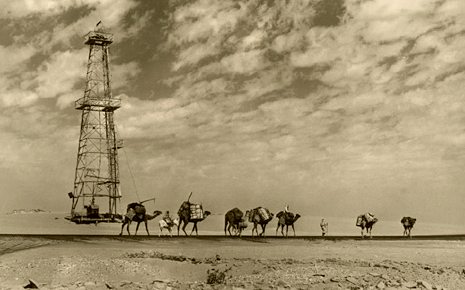 The Protocols of the Princes of Saudia
by MC

One of the giveaways of the forgery that is known as The Protocols of the Elders of Zion is that the supposed dialogue happened in a graveyard. Now, ‘spooky churchyards’ are not a Jewish cultural hang-up, they are part of a Christian tradition of vampires and zombies.

It is thought that Protocols was authored in Russia by the Okhrana (Tsarist secret police) based upon documents captured from Socialist Revolutionaries concerning their aims. It was then rewritten to point the blame at Jews to enhance the effectiveness of the then-ongoing pogroms. Afterwards this pernicious document took on a life of its own and gave rise to the ‘Jewish World Takeover Conspiracy’ that is still prevalent today, even in the comments sections of Gates of Vienna.

Now even I accept that much of what is in the protocols has come to pass, but it has come to pass under the auspices of Socialism in its various forms, and not under Judaism. “Yes,” you might say, “but there are close links between Judaism and Socialism.”

Adolf Hitler perceived Judaism and Bolshevism as the same thing, and it is true that Jews were overly represented in the 1917 revolution, but they were quickly purged by Stalin in the 1920s and early 1930s. By 1938 the Kremlin was essentially Judenrein, and the Arch-Jewish Bolshevik Leon Trotsky was brutally murdered by Stalin in 1940.

Many people, however, still believe the original Russian propaganda: that a secretive Jewish Cabal rules the world.

I strongly suspect that a Cabal has enormous influence in world affairs, and that that Cabal has Jewish members is very probable; however, it is also even more probable that this Cabal has Christian and Muslim members as well.

There are factors that indicate that there is another entity sitting in the background pulling the strings, and that is the interrelated Royal Families of the Gulf states, centred upon Saudi Arabia.

Whatever is going on in the Jihad world these days seems to have a Saudi ‘eminence grise’ there in the shadows, be it in Boston or Manhattan, Syria or Bosnia.

Erdogan famously said, “The mosques are our barracks, the domes our helmets, the minarets our bayonets and the faithful our soldiers…”

So who is the major supplier of mosques to the world?

South of Riyadh in Saudi Arabia is a huge artificial ‘farm’ ploughed out of the desert and artificially irrigated by desalinated water. Islamic eschatology tells us that when Saudi turns green, the prophet will return. By this time, of course, the Islamic dream of a universal Caliphate will have been realized.

This exchange took place on the LibertyGB website not so long ago:

i dont have to, in next 200 years there wont be any country
world will became one nation without boundaries (lots of sics)

Syed, are you a Prophet or a futurologist? How else could you KNOW these things?

Perhaps by “the world will became one nation without boundaries” you mean that *everyone will be a Muslim and live under sharia law.*

That is, Syed, as a Muslim, the world would be as you desire — completely Islamic.

All your deceitful talk about immigration, your pseudo-anti-racism, your talk about “rights”, etc. — it all points to one thing: your defence and advance of Islam. It is relentless taqiyya on your part.

In our culture and in Christianity, LYING is frowned upon. That is not to say that people don’t lie. It’s just to say that we don’t encourage it and our religion and culture don’t sanctify it, as Islam does.

So that “one nation” of yours = the Ummah! Yes?

You are a compulsive Islamic liar and a disgrace, Syed

Syed goes on to deny that this is about Islamic domination, but the thought is there.

By financing mosques, the Saudis are spreading the culture of submission that is at the centre of Islam. The real question for any wannabe Muslim is: “To whom am I submitted?”

The reality of the position of Allah in Islam is one of subservience to the prophet Mohammed; when Mohammed needs Allah to ‘do’ (say) something, he, Mohammed, has an epileptic fit, during the course of which Allah consents to the need, and allows the revelation to be revealed through his “mouthpiece” — the same Mohammed. (Does anyone see a conflict of interest here?)

So that when, for example, Mohammed finds that four wives are not enough, Allah gives special permission for his prophet (the same Mohammed) to have more, due to his ‘special’ status.

That famous presidential bow therefore becomes clearer. Was the POTUS bowing to the King as head of state, or the King as keeper of the mosques of Mecca? Or maybe just as a thank-you for paying for the law degree…?

The Gulf is awash with money, and money is power. The Saudis were contemplating hiring the US Air Force to bomb Assad not so long ago. The aftermath of both 9/11 and the Boston Marathon bombing saw suspicious Saudis being flown home ‘at the double’ — in the case of 9/11, when all other flights were grounded. That indicated BIG wasta.

Yet the Saudi Royal Family seems to sit at the centre of the web, quietly pulling the strings whilst everybody else seems to ignore their presence. We know of the long relationship between the Bush and Bin Saud dynasties, and we know that there are big bucks floating around for the likes of Carter and Clinton foundations.

The ‘one party with two heads’ nature of Congress also indicates that there is a malignant force operating over and above the legislature that controls what Congress does (as opposed to what it says it does).

We are told of the massive Chinese holdings of US debt. What are the Saudi holdings? Is the puppet being held up by its (financial) strings? We can see that the media have been bought off, but by whom?

The simplistic answer is to blame the Joos. One can then fall back on the age old panacea of ‘the Christ-killers’ to explain everything that goes on. But if the Joos are so powerful, why are they struggling so much, why are they continually the objects of ‘hate’? We don’t seem to be worried when a Yiddisher mama buys a pressure cooker; she probably has a family to feed….

There is a disjoint; the vast proportion of conflict in the world involves Muslims at some level. Yet a popular concept is that every terrorist event is a Jooish false flag.

By reputation, Joos control the House, the Senate and the White House, yet Kerry is trying once more to force Israel into indefensible borders, and with the memories of Gaza still reverberating in our ears (almost nightly gunfire now!). Israel finally won the battle against Arafat and his cronies, only to have the US administration under Clinton re-establish them inside Israel’s borders. The PNA and Hamas are both despotic tyrannies who oppress their own people and steal their wealth. Do you think that this is the result of the Jooish lobby? Do you really think that a Jooish controlled America would allow a ‘new’ Palestinian state to be Judenrein?

It is Islam that is protected. It is the status of Muslim Palestine that is being augmented at the expense of the Jewish State of Israel. We need to open our eyes and close our ears. We must stop listening to the lies and look at what politicians and nations are actually doing. It is only then that the patterns emerge.

Somebody has bought Congress. It happened in 1913, and it has happened again, but we can only play guessing games until it all comes out in the wash. My bet is that we are abiding by the Protocols of the Princes of Saudia.

19 thoughts on “The Protocols of the Princes of Saudia”