Our Dutch correspondent H. Numan sends this summary of the multiple political dramas currently unfolding in the Netherlands. 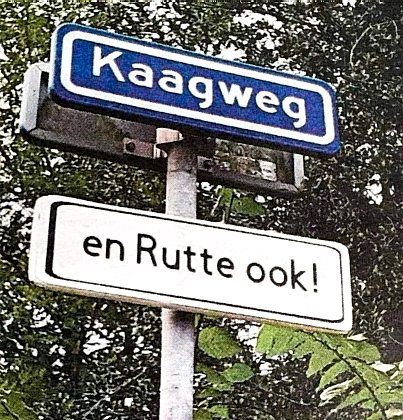 What’s going on behind the dikes? A lot. Most of it pretty bad. Hansje Brinkers (PM Mark Rutte) is riding a bulldozer demolishing the dikes as best as he can. I’ve got a tiny bit of good news, and mostly bad news.

Let’s start with the good news. The PVV (Geert Wilders’ party) is on the rise. For almost a month the PVV has been polling as the largest party in the country. Supposing elections were called for today, a conservative cabinet is possible, with Geert Wilders as prime minister. That’s the first time ever, at least in a decade. However, it’s not that the PVV is suddenly running far ahead in the polls. Yes, they have gained some ground, ever so slowly. At this moment a one-seat advantage over the VVD (Conservatives). It’s the other way around. VVD and D66 poll consistently lower.

Still, it is good news. Because in March of next year we have provincial elections. It’s dead certain the coalition will lose their majority in the Senate because of that. Let me explain why. We Dutch have a weird electoral system. Yes, we elect parliament directly. But not the Senate. That is too difficult and delicate for ordinary yokels and bumpkins like you and me to cast the right vote. Our Senate therefore is elected by provincial parliamentarians, after the provincial elections. The provincial elections (almost always as interesting as watching paint dry) will be in March of 2023. After March, we’ll see a reversed situation, compared with America: a cabinet majority in Parliament and a cabinet minority in the Senate. Supposing the cabinet hasn’t resigned before that, and there is good reason to look forward to national elections.

First of all, Mark Rutte, our prime minister got what he wanted. He’s the longest-ruling prime minister in Dutch history. The price he has to pay for it is small. After the next elections his party will be decimated. Which is not his problem. He’ll slither into a nice comfy job somewhere else. During an interview he explained how he went into politics: after his studies, he had to choose between joining the conservatives or the labor party. He thought he had better chances with the conservatives, so he joined them. Not exactly a man with principles. Probably good in business, but in politics, some principles are required. After 12 years, it’s showing.

Mark Rutte doesn’t rule this cabinet. His heart (or stone) isn’t into it anymore. Vice premier Sigrid Al-Qaq — Kaag is the real power behind the cabinet. She rules with an iron rod. She is quite popular within her party, but not with the electorate. D66 is dropping like a stone in the polls. Why? Because D66 — together with all other progressive parties — don’t remember 1792. She literally said we have to work harder, longer, for less pay and retirement later on. But her climate goals are sacred. D66 actually want to spend a lot less on people and much more on climate goals and refugees. Currently +100,000 very questionable refugees are expected for this year alone. There already was a housing crisis. Progressive parties have the gumption to openly say: we give refugees preference in social housing. They get social housing immediately. Ordinary Dutch have to wait twelve years. That’s what caused the French Revolution. The elites partied on, wanted more parties, and made the people bleed for it.

We are blessed with a benevolent king, his majesty William-Alexander. Who has the intellect of a common garden snail and matching empathy. His wife, the queen-consort, is a different story. She could have been the example for Megan Markle. She has as much empathy as her prey husband, but is ruthlessly ambitious. In Holland we have a constitutional monarchy. That means that king is required to keep his trap firmly shut. Given his preponderance for gaffes, he’d better. His consort don’t quite understand that principle. She very openly took a position in favor of a cashless society. That’s an absolute no-no. In fact, parliament can order her to apologize for it. If they have to guts to go that far, that is. See it like this: if my tap leaks, I call a plumber. What I don’t want is the CEO of the plumbing company giving his opinion about my house. Even less so if his wife starts to give her even more unwanted opinions. How this will play out, we’ll have to wait and see.

Next, the progressive cabinet wants to seriously cut down on old age benefits and pensions. We Dutch have the best-funded pension system in the world. That’s a heck of a lot of money. We can spend that a lot better on what we want, think the progressives. Not on those old fools. Who would want that? The retirement age has just been raised by three months. It used to be 65, now it’s 68. Plus three months. But only for those born before a certain age. If you are younger than 55, expect to toil until 72 years. Which presents an interesting problem. You are fit enough to work until you are 72. But if you require medical support when you are over 70 years, you are too old.

Another scandal, currently disappearing from the news, is the bitch fight between the old dual nationality chairman of parliament, Mrs. Khadija Arib, and her successor, Mrs. Vera Bergkamp, also a dual nationality muslim. They are from different parties. The outgoing chair was Labor, the new one D66. Even before Arib officially left her position, anonymous complaints were filed by Mrs. Bergkamp against her. Vera Bergkamp sounds Dutch, but she isn’t. Her real name is Firouz Chaouqui. However, she prefers to operate under her artist’s name of Bergkamp. Her (Moroccan) father’s name is Chaouqui; her mother’s name is Bergkamp. She’s not the only muslim working under an artistic name. Jesse Klaver’s real name is Yasser Feras. Also dual nationality. They all have one thing in common: giving up their ‘other’ nationality is not debatable.

Mrs. Chaouqui proved to be a terrible chairman, while Arib was quite popular and seen as a good fit. The anonymi haven’t been found out yet, but are almost certain D66 members. The complaints are fairly standard progressive smearing: she is accused of mismanagement and despotic ruling. Just another bitch fight between two alpha muslimas for supremacy, you’d think.

It got more interesting as both the labor council for parliamentarians and the professional staff of parliament resigned as well. Mrs. Arib left in disgust, even without saying goodbye. An inquiry is under way; we’ll have to see what comes out of it. Probably nothing; it will be covered up. Otherwise, that would inevitably call for the resignation of the cabinet.

We also had a few woke terrorists attacking national art. Three woke climate activists thought it was a good idea to glue themselves to the Girl with a Pearl Earring painting by Johannes Vermeer. They also smeared ketchup over the frame. They were apprehended in flagrante delicto, which is to be expected when you glue yourself to something with superglue. Surprisingly, they were convicted to two months in jail, one on probation, the very next week. That’s an exceptionally fast and harsh sentence… until you realize that doing exactly the same for a conservative cause would land you in jail for years.

Inflation hasn’t been this high even during my childhood years. The government does nothing to support the crazy high gas prices. Do note that The Netherlands used to have one of the biggest gas fields in the world. Those fields are past their best years, but have plenty left to survive the crisis. Strangely enough, that 15% increase didn’t create riots. Yet…

Rioting is also a problem. Last night Morocco defeated Belgium in Qatar. Dutch Moroccan youths celebrated the victory of their (not) home country by rioting in several cities. The riot police had to act. Don’t worry: Belgian Moroccan youths also showed their patriotism by demolishing their own cities.

As you can see, plenty of reasons for a cabinet crisis are there. It’s just a matter of time when it will happen. For the first time in at least a decade there is a chance of a real conservative cabinet. When it happens, Mark Rutte will hand over the keys of ‘het Torentje’ (office of the prime minister), laughing his head off. “Here are the keys, Geert; not even Jesus himself can fix this mess!”

The photo at the top of this essay needs a bit of explaining. It’s a common street sign. “Kaagweg” means “Boat Street”. A kaag is a kind of boat. What you see is a form of Dutch humor. You can read it also as (Mrs.) Kaag (moet) weg, or Mrs. Kaag (Al Qaq) should go. Someone added a sign below: and Rutte has to go as well!