Our Dutch correspondent H. Numan sends a European take on the notorious speech given by our Dear Leader in Philadelphia on September 1. 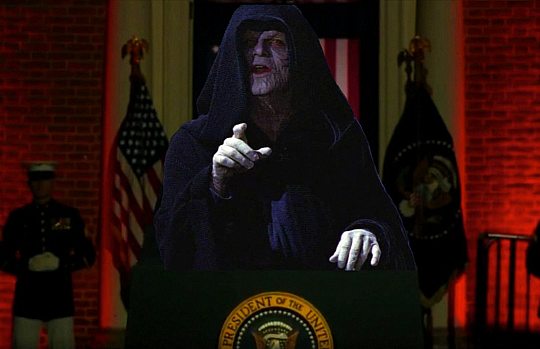 Normally I don’t write about American politics, but in this case I feel I have to. I couldn’t believe my eyes when I saw Emperor Palpatine Biden deliver his speech. It’s definitely one for the history books. Not for its eloquence; that would be the Gettysburg Address. Not for its brevity. That honor goes to Roosevelt with his declaration of war on Japan. Certainly not for its literary qualities. Churchill holds that honor. No, it was the most divisive speech by any US president in history. An open invitation to please revolt, so we can finally arrest you all. A weird address full of contradictions.

What’s a semi-fascist? Someone who is almost a fascist? Or more like a semi-truck, a kind of super fascist? You tell me. Biden is rambling about the dangers of MAGA Republicans, but seconds later about their dwindling numbers. It can’t be both at the same time. On and on he rambled.

Then the backstage. This was not sleepy Joe going off teleprompter. It was carefully planned, organized and executed. Who was the director? Leni Riefenstahl? Nope, she is dead. Steven Spielberg? George Lucas? I doubt if those two would want to destroy their reputations for that. The chap who directed it was definitely a Star Wars fan. Only two things were missing: Lord Darth Biden didn’t wear a black cape with a hoodie, and the Imperial March wasn’t played.

Riefenstahl would certainly have liked the blood-red backdrop and the two security unit members supplied by the US Marine Corps. Security unit translates to Schutzstaffel in German. That was, I think, a first in US history. A president delivers an address with two marines prominently visible in the background. I have great respect for the USMC, but they should have declined or at least complained. They didn’t. That really hurts their reputation. I’m definitely not the only who finds this… ‘a bit unusual’.

Normally when Biden goes off-prompter, the White House hastens to rectify the damage. Not this time. Highly unusual, it was Biden himself who — sort of — retracted his words a bit, a couple of days later. No, he didn’t mean all Republicans. There are some good Republicans too. For him, that’ll be RINO or dead republicans, of course he didn’t say it out loud. When asked ‘what exactly is a semi-fascist’ his reply was: ‘you know’. Really weird, the White House supporting the president’s words while the president carefully backpedals.

Which brings me to the question: what exactly is Biden up to? Not much good, that’s for sure.

I’ve witnessed several coups here in Thailand. Twice much too close for comfort, to be honest. Those coups didn’t come from thin air. No general (or activist leader) ever got up, heard the birds chirping, and thought: what a great day for a coup! Far from it. It’s dangerous, can easily backfire and you never know for certain you have won. Until you have, of course.

Biden has a deadline to meet: 4 November. Vilifying 50% of the population mere weeks before the election isn’t going to help him. This kind of sowing discord needs to be spread for much longer to have any effect. It might be an act of desperation, but I really doubt that. It’s too carefully planned and orchestrated. I worry about what comes next.

So let’s focus first on what is going to happen after 4 November, as most people think it might. Biden’s party loses by a landslide. The House and Senate become Republican, with a substantial majority. Biden will be impeached as soon as the new members are sworn in. Together with him, most of his cabinet. Certainly the top of the FBI and the DOJ. Hunter Biden will almost certainly be arrested, unless he flees the country. Very likely the Clintons and a certain Mr. Hussein will have to explain a lot.

So it’s all or nothing for Biden and the DNC. Either he wins the election, or he goes down. Biden may be mentally losing it, but he’s not that far down. He knows. So does his cabinet and the DNC. Either they win, or they go to jail. They have tried that trick too many times on Trump. They know it’s going to be payback time. No matter whether Trump runs again in 2024 or not.

Tucker Carlson wasn’t afraid of a coup. He thought the address was a kind of an act of desperation, or a buffoonish performance. According to him, the Democrats lack the knowledge for that. He usually is right, but here he’s dead wrong. Every socialist activist with some aspirations writes a dissertation about subverting the population or how to successfully commit a coup.

Real socialism comes almost always after a coup. Rarely after elections. In order to get that far, you need a soft coup. That’s the phase we’re in right now. Biden — or more specifically the DNC — controls everything already. All they have to do is survive those elections or make sure the elections are postponed. Postponed indefinitely, that is.

The great dictators all announced they had to temporarily suspend the rule of law, to save democracy (or their form of government). No exceptions. Mussolini did it, Hitler did it, Stalin did it, Mao and even Franco did it. The only thing Biden lacks is a valid excuse.

The DNC made several coups-by-court attempts, all in vain. The impeachments didn’t work. The Jan 6 committee is not working either. That’s a real embarrassment, because no Democrat showing the slightest sign of doubt was allowed to join the committee. No republicans except for the most reliable RINOs were asked. It’s a textbook example of McCarthyism.

The raid on Mar-a-Lago raid was an even bigger embarrassment. Nothing turned up, of course. Trump isn’t that stupid. He certainly doesn’t hide secret documents in his wife’s closet between her Gucci bags.

Now I’m getting to the crux of the matter. All the above is not incidental, but planned. Or at least they looked at their failures and try to work them into something positive.

Biden knows he can’t convince enough Republicans to jump ship. He tried that before; the last RINOs are hunted down. Mitch McConnell better be looking for a retirement home, because he’s not going to be Senate Minority Leader ever again. Biden also tried to get the most vocal Trump supporters into office, hoping that would backfire in November. It didn’t. So that ship has sailed.

He doesn’t have to worry (too much) about his own party. He bribed enough students to tip any outcome. Yes, it’s Costa Banana time in Washington! Not all radical left-wing student will vote for Biden, but who else can they vote for? They are morally obliged to show at least some gratitude by voting for Biden. So he didn’t have to deliver the Philadelphia Address to woo his electorate.

He can’t convince Republicans. His own voters are in the bag. That leaves the undecided voters. He didn’t do particularly well in this department. Jill’s remark about breakfast tacos didn’t sit well with Latinos, to put it mildly. No worries, time for the hatchet! The undecided voters need to be scared enough to vote Democrat. That’ll be the deciding factor.

To do that, he needs to set the stage. Nothing and nobody is perfect. Trump survived two impeachments, and is currently harassed by the Gestapo. Therefore, many people will believe that Trump did something wrong. Otherwise he wouldn’t have been impeached so often, nor would the Gestapo bother him.

Until now, Biden has been able to hide behind plausible deniability. He didn’t mean it, just a matter of interpretation, etc. If the public receives the Philadelphia Address well, do another one, to up the ante. Or commit your coup. If the public rejects it, think of something new.

Look for what the dark lord is going to do next. If he follows up on his address, start worrying. Not much else you can do, anyway. Ask yourself why Biden all of a sudden hires 87,000 IRS men. The IRS has exactly the same powers as the police, even more with regard to taxation and finance. Nobody seems to notice recruiting 87,000 IRS men is a heck of a lot. All he needs now is a valid excuse. Auditing your enemies was the favorite tactic of his old boss, Mr. Hussein. Perhaps he learned from him?

I have no idea at all if this very dark theory will become reality. Yet, I feel I’m not wrong, as much as I would love it.

30 thoughts on “The Philadelphia Address”