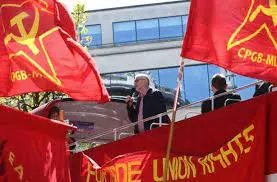 Jeremy Corbyn helped lead the Labour Party to ruin in the UK before resigning as party leader in 2020. In addition to being a hard-left zealot, Mr. Corbyn was a notorious Jew-hater. Having failed in the UK, he is now taking his act to Belgium.

Many thanks to Gary Fouse for translating this article from React Nieuws:

On September 17 and 18 the extreme left “Manifiesta” will take place in Ostend. This year the extreme leftist Jeremy Corbyn is the featured main speaker. Corbyn was the chairman of the British Labour Party from 2015-2020. He liked being photographed with the Stalin genocide flag a lot.

It is remarkable, however, that the PvdA [Dutch Labour Party] and other guests at the hate fest, such as, for, example, Tom Lanoye, present themselves as fighters against “anti-Semitism”. But let the latter be the reason why Jeremy Corbyn, after a thorough investigation, had to resign as Labour chairman.

Corbyn first became known through extensive collaboration with the Islamic Palestinian terror organizations, Hamas and Hezbollah. They conduct a political fight against Israel and the Jewish people, but also mix that fight with Muslim fundamentalism and the use of terror, including suicide attacks. The message is clear: All Jews must die. Parades are openly held featuring the Hitler salute. It can’t get any more clearly anti-Semitic.

No objection, however, for the Manifiesta guest Jeremy Corbyn. He invited supporters of Hamas to the British Parliament. Among them was a man who, in 2009, expressed full support for Hamas, and a man who, in 2004 declared that blowing yourself up in an Islamic suicide attack was “a noble thing”.

Within the Labour Party, Corbyn supported a culture of anti-Semitism between 2015-2020. People and elected officials of Jewish origin were bullied out of the party. Eventually, an official investigation was initiated by the “Equality and Human Rights Commission”, an independent organ set up by the Equality Act of 2006. After an extensive investigation, the commission determined in 2020 that employees of the Labour Party had, indeed, engaged in unlawful bullying and that 23 cases were proven involving inappropriate behavior in connection with anti-Semitism by Labour employees, including one by Corbyn personally. Based on that, Corbyn was suspended by Labour itself.

Tom Lanoye presents himself this week in HUMO (Belgian tabloid) as a fighter against anti-Semitism. Can we have a hearty laugh?

Not only anti-Semitism is welcome at the Manifiesta. The disguised political party festival of the Stalinist PvdA also fraternizes with people who wave the Stalin genocide flag, applaud dictatorships in Cuba and Venezuela, and glorify the violation of civil rights of people on the right with street violence and violence against the police. We revealed that earlier.

4 thoughts on “Jew-Hating Workers of the World Unite!”