As reported in the news feed in recent days, there have been massive riots in multiple locations in The Netherlands as a reaction to the new COVID-19 curfew. Our Dutch correspondent H. Numan sends this report on what’s happening. 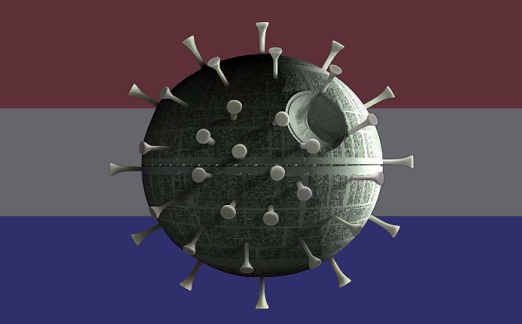 Massive riots over the whole country

Quite a lot is happening in the land behind the dykes. For starters, the government resigned. A couple of weeks ago I wrote an essay that this was going to happen. It did. After resigning, the now caretaker premier ordered a highly controversial curfew because of the ongoing Chinese virus pandemic. This lead to major riots now spreading all over the country.

This curfew is the first one after World War Two. We Dutch have some pretty bad memories about curfews. The last chap who ordered it was executed. He was Reichscommissar Seyss-Inquart. His name translates almost perfectly into six and a quarter in Dutch, which became his nickname. Unofficial of course, as he didn’t have a sense of humor. On the remains of his command bunker you can still see chalk marks with 6¼ near the entrance. But I digress.

The resignation of the cabinet was inevitable. A long-smoldering scandal in the tax department was going to end in a full parliamentary debate. Heads would roll. Something that normally doesn’t worry Mark Rutte too much. This time, his own head was on the block. By resigning he prevented that debate, and continues as caretaker premier and as a candidate in the coming elections.

It’s legal — but barely. Imagine a company where the billing department made huge blunders. So big that firing the head of the department won’t do. The CEO might be fired by the board. So the CEO simply resigns to avoid an inquiry. As there is no inquiry, he can remain a candidate for CEO. I’m not sure if this would be possible in the business world, but in politics it works.

It’s even worse: his advisors openly said that he can now rule by decree. He doesn’t have to listen to parliament anymore, as he has resigned. After all, you can’t fire someone who resigned. His position is now much stronger than before.

In my book, ordering the most controversial law since World War Two is not exactly something a caretaker should do. I think it’s probably legal, otherwise we would have heard the opposition about it.

But that’s what happened. The decree passed, no problems there. We don’t hear from the opposition on it, but rather from the electorate. Many of them. By throwing bricks. On Saturday and Sunday huge riots broke in Amsterdam and Eindhoven. Those riots have spread throughout the country. Once the police started to enforce that curfew, the riot police had to act on it. Supported by water cannons and mounted police. Who are the rioters? Well, the media are working very hard to put the blame on supporters of Geert Wilders and Thierry Baudet.

The leader of the Labor party, Tobias Asscher, had to resign himself, just before the resignation of the cabinet. He’s been replaced in the party by Mrs. Ploumen, who openly accuses Wilders of inciting the riots. Don’t worry, Ploumen is not very popular. Not in the party, and certainly not outside. They simply haven’t got anyone else at the moment. The PvdA [Labor Party] currently has nine seats. With Ploumen at the helm, that’ll be a lot fewer.

On social media you see a lot of photos of elderly demonstrators being severely beaten by the riot police. Usually accompanied by remarks like “he’s a hero” and “look what the NSB (= quislings = riot police) did to the poor man!” I saw a short video clip in which an elderly (?) lady with a walker was escorted out of the riot zone by police officers. The old hag (?) grabbed in her bag and tossed some green powder over the officers. I don’t know what, and am not sure if the lady was elderly. Hence the question mark.

Now, I served in the military police. We are the riot police for the riot police. Who ya gonna call when ya can’t handle ya riots? Ghostbusters? Nope. In Holland the police call the Marechaussee. So I do know what is going on, on the other side of the shield.

There are very strict rules that the riot police have to follow. Beating a demonstrator to a pulp because he is annoying is not a good reason. Violence can be met with violence, but as little as possible. There are plenty of experienced senior sergeants just behind the front row to make sure of that. It’s quite understandable that an officer is provoked too much, and wants to lash out. The senior sergeants are there to prevent that. Besides, the Dutch police do not have a reputation for unbridled violence. More the opposite.

So, what exactly where those elderly people doing there? You have to misbehave pretty badly, certainly when you are an elderly person, before the police use any kind of force. Let alone beating up someone to a pulp. And … what were Mr. & Mrs. Old-Geezer doing in the midst of an out-of-control riot? Walking the dog? Seeing the sights? On their way to their retirement home? Or, perhaps, maybe, provoking a violent reaction? Methinks the latter.

The real perpetrators are the usual suspects. Mainly Antifa. With a lot of help from minorities and, make no mistake about it, plenty of local hooligans. As in US cities, supermarkets were vandalized and ransacked.

The political left tries to put the blame on Geert Wilders and the PVV. Makes sense: who are the rioters? Mainly, probably predominantly, the left. The best defense is a good offense, so at the moment the media are suggesting PVV supporters caused those riots. Not Moroccans, not refugees, not any kind of ethnic minority. All of them are Trump Wilders supporters. Sounds familiar?

Why set a curfew? That is a highly controversial measure bound to lead to riots. We haven’t had a curfew in 76 years. Can the virus read time? Of course not. The real reason for this — by Dutch standards — exceptionally heavy-handed policy is the coming elections.

The government can’t simply postpone the elections. Parliament wouldn’t stand for it. Not even Mr. Rutte’s VVD party. At the moment Wilders is doing well in the polls, while support for the coalition is dwindling. The VVD remains stable, but on a downward trend. CDA [Christian Democrat Party] is losing support, mainly because they elected a high unpopular and incompetent clown (Hugo de Jonge) as leader. So much so they had to dump him and replace him with another. Currently that’s Wupke (yes, that name sounds as silly as Hugo’s shoes are) Hoekstra. Two reasons for his promotion: he toes the party line exactly and is virulently anti-PVV.

Now, when the government next week announces the postponement of the elections, due to ongoing the riots and the pandemic, it is more than likely parliament will accept that. All Rutte has to do is wait until his preferred coalition becomes possible in the polls, and then lift the curfew. Problem solved. That’s the real reason for the curfew.

Another thing that doesn’t sit well with the public is our clown minister for health, Hugo de Jonge. His brother is owner of a pharmaceutical company. They also want to produce a vaccine. Weirdly, vaccination has been very slow in The Netherlands. In Europe only Bulgaria is behind us. Could that be a coincidence, or perhaps the clown is fixing things for his brother? I’ve heard stranger conspiracies in the last year.

In short, a combination of mismanagement on an epic scale, a pandemic lasting more than a year, a prime minister who is forgetful (regarding his own mistakes), an economy turning sour and left wing activists who grab this — for them — golden opportunity to riot and put the blame on someone else.

Make no mistake about it, Geert Wilders is firmly against the curfew. But only by legal means. Not by violent action, certainly not by wanton rioting. Neither was Trump, but like him Wilders is tarred with inciting rioting.

16 thoughts on “Massive Riots Over the Whole Country”