Time and again police forces in the West “search for a motive” for the latest attack. The following essay was published at Liberty GB in May of 2013, three weeks after the Boston Marathon bombing. It exposes the handicap facing law enforcement if they have no information or training about jihad. 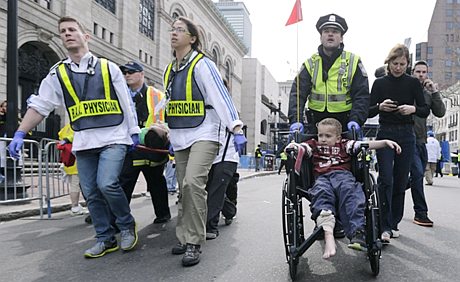 On 12th September 2011 Boston police were called to a triple homicide in an apartment. Three men, stabbed in the neck, had bled to death. There were no signs of forcible entry: “It does look like the assailants and the decedents did know each other… it does not appear to be a random act”, police said.

The neighbours had heard nothing, even though windows were open. Some $5,000 cash was found in the apartment, so robbery was not considered to be the motive. Unusually, marijuana had been spread on the bodies. The incident was deemed to be some sort of drug-related killing, and was effectively left no further investigated. Police found no dots to connect.

The US police operate deprived of training about Islam. To someone who HAS looked at these matters, though, there are several ‘dots’ to connect. The killing, though reported on September 12th, actually took place on the evening before, the 11th. The observant will spot that that was the tenth anniversary of 9/11. Muslim jihadis go in for anniversaries. Osama bin Laden chose 9/11 because it is the anniversary of a dire defeat for Islam at the Gates of Vienna in 1683, when Ottoman forces, invading Austria in an aggressive jihad, were defeated by the timely help of King Jan Sobieski of Poland. That was a pivotal event: it prevented Europe from falling to Islam’s conquest at that time. Osama bin Laden’s spectacular attack was carefully timed to balance the account, and renew the world conquest by Islam.

It is not only the date of the killing that has Islamic significance. The victims, too, have a significance: they were Jewish, the race for which Islam’s texts command “animosity and hatred forever” (Koran 60:4), “Be apes despised and hated by all” (2:65), “…those whom Allah has cursed; who have been under His wrath; some of whom were turned into apes and swine” (5:60) and so on. There is no difficulty in perceiving the message there.

The method of killing has an Islamic significance. “Stabbed in the neck” seems to be a police cover-phrase for throat-slitting. Slitting the throat is traditional Islamic halal slaughter, as used for animals. In the Koran Jews are likened to donkeys (62:5) as well as apes. “As for the Jews, you kill them physically”, recommended Abdullah el-Faisal (Undercover Mosque, Channel 4). “Praise be to you, our Lord, you have made our killing of the Jews an act of worship through which we come closer to you”, proclaims an Imam on TV (“Voices of Islam”, by David Horowitz, Frontpage Mag, 16 April 2012). Throat-slitting is apparently a speciality of Muslims in Chechnya.

One of the victims, Brendan Mess, was keen on keeping fit and working out at the gym. The instructor there remembers one of his ace boxers introducing him as “my best friend”. Who was that ace boxer? It was a Chechen Muslim named Tamerlan Tsarnaev, fit, strong, and an accomplished fight-winner. As a youth he had been granted asylum with his parents and younger brother as refugees. He had been helped with state schooling, college scholarship, welfare, and so on, and was married with a young child. Tamerlan Tsarnaev, police found recently in enquiries that could have been made at the time, had previously been a user of alcohol, forbidden by Islam, and of tobacco, but since becoming a much more hard-line observant Muslim, had given up both of them. His younger brother, Dzokhar, apparently had been a user of marijuana. Tsarnaev had been observantly attending the Boston mosque (associated with hard-line jihadi speakers), and had a police record for being physically violent to his American-born wife to oblige her to wear the hijab.

Tsarnaev, it was noticed in puzzlement, did not attend the funeral of his friend. He was uncommunicative about the sparring partner he no longer had, and was touchy, given to bursts of rage. On one occasion he loudly interrupted a speech in the mosque in protest that the speaker had praised Martin Luther King, a non-Muslim, an interruption for which he had to be taken out of the building. He was violent towards his wife, and “it would seem that he was the one imposing Islamic law on his parents”.

Tsarnaev, as it happens, had been the subject of two alerts given to the USA, one from Saudi Arabia, warning the US that he was planning a terrorist attack, and one from Russia, who had observed him, on a prolonged visit to Chechnya, associating frequently with a known terrorist (since killed). A six-month visit by an unemployed young father to the state from which he had been granted asylum as a refugee makes a mockery, of course, of the asylum system, but should, on its own, have raised a flag with Boston police. It is not known to this writer whether the foreign warnings ever reached Boston [subsequent information: they did not]. Both father and mother also returned to Chechnya at various times. They cannot, as a family, have been in great danger.

One detail should have alerted police that their just-another-drug-killing theory was misplaced. This was the spreading of a quantity of marijuana over the bodies. A drug-user would not have wasted the drug like this. It looks far more like a message of disdain, of contempt, and rejection. The police should not have written the incident off. That was a failure.

Another rather glaring feature of the triple homicide is just that: there were three victims. How do three people have their throats cut without some sort of struggle or noise? Were they all drugged out of their minds? The police spoke of “assailants”, plural. Perhaps the victims had been held at gunpoint by an accomplice.

As is now well known, both Tsarnaev brothers were involved in April 2013 in perpetrating the Boston Marathon jihad bombing. Three people were killed — murdered — including an eight-year-old boy; his little sister had a leg blown off; a man nearby had both legs blown off, and has been deafened. Scores of other people have been maimed for life, wounded and traumatised.

Now, after the unheeded warnings from abroad, and after the murderous jihad bomb, for which the younger Tsarnaev wrote “Praise Allah” in the boat where he was hiding, bleeding, police are looking again at the triple homicide. Mobile telephone records locate the brothers in the vicinity on the evening of 9/11. DNA evidence ties BOTH brothers to the scene. One brother remains alive under arrest. The case against him is awaited. A public call for the Boston mosque to be closed down has been made by the American Freedom Defense Initiative.

The Boston police were prevented from connecting the dots because the dots had never been supplied. Had they instead been connected, the Tsarnaev brothers could have been investigated. If it had been they who were the killers they would have been in custody or even jail at the time of the Boston Marathon of 2013. There would have been no Tsarnaev jihad bomb, no bodies, no legs blown off, no blood, no injuries, just a happy commemorative family event.

Are British police handicapped and blindfolded also? Have the instruction materials been purged at the behest of the Islamic lobby? Are police given Islamic training that does NOT come from imams, who are authorised by their ideology to dissimulate and deceive? The planned Dewsbury bombing of the English Defence League, backed with guns and knives, was discovered by accident. Other plans have been revealed by intelligence work. Clearly other jihad bombings are being planned for crowded public events. It is only a matter of time. Islam is in a state of war with the West. In Islam’s teachings the West is Dar al Harb, the Realm of War. Police need training material about Islam.

The inadequacy of the police description “stabbed in the neck” was revealed by a Boston police spokesman years after the Waltham killings. The victims had had their throats slashed with such ferocity that their heads were almost severed, he said,

Still, even all those years on, he did not realise how this confirmed the inadequacy of the police response to the killings. It highlights, though, the need for Islam-related training. It was like Al Qaeda, but nobody followed up that clue: there were no dots.