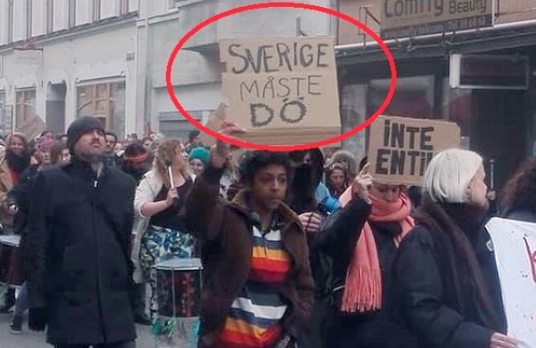 Demonstration in Malmö: “Sweden must die”

“Sweden must die.” This was one of the messages when left-wing activists demonstrated at Möllevångstorget in Malmö.

During a march in Malmö on International Women’s Day on Sunday one of the protesters carried a sign with the message that Sweden must die. On other signs there were, among others, slogans such as “Klasskamp = transkamp“ (Class struggle = trans fight).

“Not really what the labor movement’s pioneers August Palm and Kata Dalström might have intended,” writes the local party Malmölistan, which published the photo from the demonstration.

The newly-formed Malmö list consists of a large breakaway group from the Communist Party in Malmö that has had enough of the so-called “middle-class left” and its focus on cultural Marxist issues.

“They do not understand why so many workers do not think that multiculturalism, the LGBTQ movement and Greta Thunberg are something fantastic, but think we are in 1930s Germany and that workers who vote SD were infected by some Nazi illness,” said Nils Littorin, who is now the party leader for the Malmö list, to the local newspaper in connection with the mass outflow from the Communist Party in December.

14 thoughts on “Sweden Must Die”