Our Dutch correspondent H. Numan follows up on last week’s reports on the Utrecht tram mujahid with additional details and context. 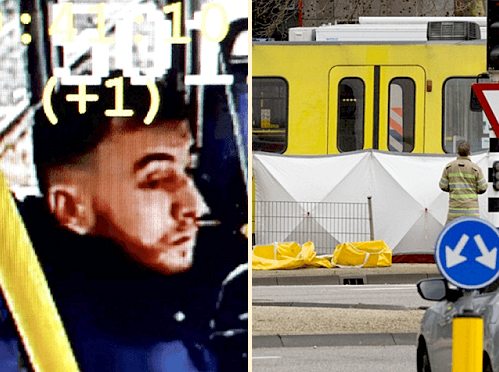 I’ll expand on this article about Gökmen Tanis, the Utrecht tram killer. First of all, in The Netherlands, like in most western countries, we don’t have the death penalty. We do have life in prison. It is exactly that: you go out with your feet first. The king can grant a royal pardon, but that happens rarely. In the few cases someone has been granted a royal pardon, it was to let them die (usually of old age) outside prison.

As you probably can guess, this doesn’t sit well with our progressives, who want to abolish this “life is for life” sentence. A notorious murderer, Cevdet Ilmaz, received life in prison for killing six people on a shooting spree in a bar in Delft in 1983. Motivation? Someone said he wasn’t a real Dutchman. Which he proved by gunning wildly around him. He’s doing fine in jail, though he constantly asks for a royal pardon. Progressives support his requests, and want him to be able to start ‘rehabilitation training’.

I don’t have a problem with that. Happy to oblige. Here’s a coffin. Go lie down in it. Comfy? No? Try turning to the other side. There you go. You are now fully trained for going outside again. Cevdet was a precocious innovator. Today he would have been a muslim terrorist or a poor victim of discrimination. Back then, only the PLO were muslim terrorists. During the ’70s and ’80s red terrorism was our main problem. The PLO was just a sideshow, though an important one.

Now let’s go back to Gökmen. This piece of excrement was born in 1981 in Turkey and moved with his family to The Netherlands in 1993. His parents divorced in 2008. Gökmen stayed with his mother. He was addicted to hard drugs. In between periods of treatment he became religious. He didn’t have many (or any) friends, and was highly aggressive when using drugs. He lived with his mother in Kanaleneiland, a predominantly muslim ghetto in Utrecht. It is not mentioned anywhere, but read between the lines. I doubt very much if he graduated from primary school, let alone high school. Given his friendly disposition, I very much doubt if he ever did an honest day of work. In other words: from the moment the family migrated he caused nothing but trouble. At great cost to our society.

In 2011 he was interviewed by GeenStijl TV. He told the female interviewer she was a slut and a whore because of her dress. In 2013 he shot at an apartment in Kanaleneiland without hitting anyone. He was convicted of illegal possession of a firearm and sentenced to 150 days in jail, of which he served 49 days.

In 2017 he raped a girl, possibly his girlfriend. A few weeks later he was paroled on conditions. After he broke his parole he was rearrested, but released again when he promised to keep his promises. He had to appeal for that. (At whose cost do you think? His own? Think again.)

In 2019 he went on trial for burglary and theft of a bicycle. The verdict was not yet handed down when our busy young man went on his killing spree in the tram. He aimed specifically at non-muslims. A few witnesses say they stood behind muslims in the tram. That’s why they weren’t targeted, as he couldn’t see them.

During the trial he misbehaved badly. He didn’t acknowledge the court, as he wasn’t a democrat. He spat in the face of his court-appointed lawyer. Gave ‘the finger’ to the court, made kissing motions to the prosecutor (a woman). When a victim made a statement ending with ‘… and he will not defeat me,’ he answered with: Too bad! He said “I piss on you all” to the court, and when the court asked what he thought about the penalty the prosecutor asked for (life in jail), he answer was ‘give my regards to your mother’.

The verdict hasn’t been announced as yet. That usually takes 14-30 days. I’ll keep you posted on what the judges think of this pearl of integration. Given his behavior and respect for the court, they will likely be inclined to sentence him to life. Otherwise it’ll be 30 years. That means he’ll be free to roam the streets again in 2040. Hopefully I won’t live long enough to be around to see it.

Now let’s see. What have we got here? A shining example of multiculturalism. A story in which everything fails, and everybody looses.

A family has to leave the blessed fatherland due to poverty. They moved to an infidel land of milk and honey. Why devout muslim countries are dirt poor and heathen infidel countries are filthy rich, well… Let’s not go into that. Allah knows best! We’re going to collect our well-deserved jizya.

On the receiving end we see progressives welcoming the family with open arms, plenty of welfare and very little else. The family cannot and must not integrate into their new society. That’s a given. The boy is a failure in school. He together with many others. Which means lots of work for welfare workers. Those welfare workers probably know they are not taken seriously. Only seriously taken for a ride, and milked for all it’s worth. Doesn’t matter at all. We got nice comfy well paying jobs. Beats working for a living! So they don’t complain.

Now, when I moved to Thailand 25 years ago, I knew it was going to be tough. That’s why I read anything I could find about Thailand before moving, and afterwards much more. Anything about Thai history, Thai culture, culture shock and a heck of a lot more. Even so, it was pretty hard. I have no problems at all integrating. Yes, I’m Dutch. So what? Now I am a Dutchman who happens to live in Thailand, and likes it there. Yes, sometimes it can be difficult. No Thai expects me to be fluent in the language or to become a Buddhist. Everybody is pretty happy that I speak fairly decent Thai. I respect Thai religion, but that doesn’t mean I converted to Buddhism. Integrating, as far as I can see, is to fit in the society. Learn the language. Don’t offend anyone with your customs, if they happen to be different or conflict. I never walk around in baggy trousers on clogs sucking a stone pipe demanding that the shops be closed on the day of the Lord!

Living in Thailand means automatically trying to integrate into society. If you don’t do that, you lose. Sure, sometimes documents are translated in English. Often, they are not. It’s up to you to figure that out. The government is not going to do it. If you’re not happy with sometimes bad translations, get a translator yourself.

That’s where Western countries went wrong. Unlike Thailand, Western countries had mass migrations for a purpose. Those migrants were not properly managed. You cannot expect a barely literate or semi-analphabetic to read up about the country he’s moving to. He can’t. That makes it the job of the people in his home country sending him, or the country on the receiving end. Nothing was done whatsoever. In fact, the opposite happened. Those semi literate people are actually encouraged to stay as alien as possible by all progressive parties. For some strange reason not integrating is seen as something multicultural, to be cherished.

Go to any city in Europe with a substantial muslim minority. What do you see? A derelict ghetto. It’s like suddenly walking into the poorer parts of Ankara or Marrakesh. From one street to the next you see signs in Arabic or Turkish. Not in Dutch. Or German, or English, or French or whatever. It’s the same in every Euro nation. Lots of little shops selling everything. Lots of shipping agencies and telephone shops — we call them ‘belhuizen’ in Dutch. Shops where you can make cheap long distance phone calls. Why the need for so many shipping agencies? I send sometimes a letter to my family. That’s about it. The post office is all I need. Isn’t it strange to see a street with so many shipping agencies next to each other? What the heck are they shipping? And why so much, that rows of shipping agencies can make a living out it?

Rules for commerce are ignored. I know, because my dad used to work for the economic police. A bakery is not allowed to sell wine, vegetables or clothing. Unless … Every shop has fixed opening hours. Being open all days of the week from 6:00am until midnight was not allowed. Unless… Do mind that this has been going on since the mid-’70s. Almost half a century! I asked my dad once why that was. Well, son, he said. We’re the economic police. We are unarmed. If we want to enforce the rules on them, that would create a massive riot. They won’t accept or tolerate it. We’d be lucky to get out alive. So we have strict orders not to investigate. A schoolmate of mine confirmed this. His father worked for the IRS, which specifically ordered him to look the other way, otherwise he could be accused of racism. Again, that is not something recent. That’s way back in 1975 or thereabouts.

Now, as most of you are Americans, see the resemblance to your Democrat party? The cities ruled by the Democrats are exactly the same. Just with different minorities. The Democrat party was the party of slavery and Jim Crow laws. We see exactly the same in Europe, where the socialist parties do their very best to create a socialist multicultural paradise. In plain English: a hellhole on earth. The only difference being that European socialists came too late to the scene for slavery and Jim Crow laws. As in America, conservatives are tarred Nazis, vilified and ostracized. Boatloads of money are emptied into a bottomless pit ‘to alleviate poverty’.

The very same people who cannot solve simple problems such as poverty or decent housing (in Holland we have had a huge housing shortage since WW2) now demand even more money to change the climate.

7 thoughts on “The Tram Trial”