Our Swedish correspondent LN has compiled a report on the persecution by Sweden’s “justice” system of a Swede named Denny Abrahamsson, who committed the unpardonable crime of saying negative things about Islam on social media.

The government and agencies in Sweden are constantly working to reinforce anarcho-fascist tyranny. State-funded denunciation, primarily through the “Net Hate Examiner”, of forbidden thoughts spoken or published, or so-called “net hate crimes” against foreigners, Muslims, etc., is growing all the time. 2019 was a record year for the Net Hate Examiner’s operations: “We are up by 1400-1500 cases”.

Below is a typical example showing the result of such a state-sponsored denunciation, from Samhällsnytt, February 14, 2020. 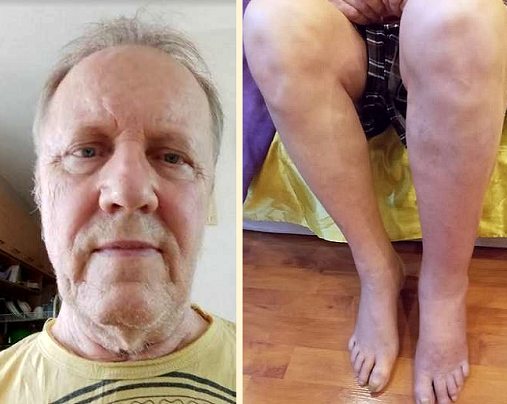 Denny Abrahamsson, 73, is a native of Stockholm, but lives during the winter season in Thailand. After a defeat in the Court of Appeals, the Net Hate Examiner has notified him again, and now he will stand trial. Thai doctors discourage him from flying home, but Stockholm District Court rejects the certificates and threatens the pensioner with a fine.

Samhällsnytt has previously reported on Denny Abrahamsson who, after a long battle with the judiciary, was finally acquitted in the High Court (Hovrätten) on the charge of incitement of hatred against an ethnic group. At that time he was charged, among other things, for writing that Islam is a “fascist ideology”. However, it did not take long before he was denounced again to the police by the same actor (the Net Hate Examiner) as last time.

Excerpt from the lawsuit:

Hatred Against a Group of People

Denny Abrahamsson has expressed disdain for Muslims with a creed. He has written several posts in an open group on Facebook with anti-Muslim content. The messages are propagated by being available on Facebook. It happened on March 17, 2017 in an unknown place, Stockholm city.

Samhällsnytt has had access to police interviews with the man. According to the interrogation, he is now suspected, among other things, of having written on Facebook that “low-IQ cultures do not mix well with high-IQ societies” and that “cousin marriage and inbreeding in Islamic culture cause birth defects, low IQ and aggression.”

This was reported to the police by the state-funded Net Hate Examiner sometime in 2018.

Since then, the trial date has been moved several times, finally to January 27 of this year. Abrahamsson has sent two medical certificates from Thai doctors showing that his legs have swollen, probably as a result of blood clots. He has been prescribed blood thinners to take to dissolve the clots. At the same time, he is advised against air travel for more than four hours, for the reason that blood clots are often formed after sitting still for too long and can settle into the heart or lungs at risk to life.

Abrahamsson has also sent pictures of his swollen legs to the district court through his lawyer.

Despite the certificates, pictures and physical blood samples, the court in a special decision rejected the documentation. To assist them, an expert council of four persons has been assigned from the National Board of Health and Welfare (Medicinalstyrelsen). According to the decision that Samhällsnytt has taken note of, the pensioner is charged with a fine of four thousand kronor for missing the trial without having “legal failure to appear“ — that is, without a legitimate reason for it. In addition, he will be forced to pay SEK 8,000 if he does not appear at the next date, sometime in February:

In its opinion, the legal council of the National Board of Social Affairs (Socialstyrelsen) states that his “complaints according to the diagnoses in the two Thai medical certificates are such that they should not hinder him; that is, his medical condition can typically be treated with medicine”. Furthermore, it is believed that the risks of flying then will not be greater than for any healthy person.”

In a comment to Samhällsnytt, Abrahamsson describes the following statement from the National Board of Social Affairs (Socialstyrelsen): — They want to drag me home for a new trial even though I sent medical certificates that discourage me from long flights while I take blood thinning medicine. Also, use support socks, when I still have blood clots in my legs and lungs. Strange that they question my doctor’s assessment.

At the same time, he wonders why the hard-pressed justice system chooses to devote resources to having four experts from the National Board of Health (Medicinalstyrelsen) to examine his medical certificates.

He does not regret the statements he made earlier and adds the following: “Today I would write that Islam is worse than fascism as it legitimizes both pedophilia, rape and women oppression. Unfortunately, I can’t post to my Facebook groups because I’m off for life.”

Despite the threat of a penalty/fine, he does not plan to follow the district court’s decision: “The court appearance, I think, is scheduled for the end of February, but I will not find myself in it, that is, accept it.”

Here’s the decision that he received from the Court:

“I suggested to the Court the beginning of June when I still have to go to Sweden. I have been advised not to fly too much.

“Maybe I can get picked up by Greta’s sailing boat,” he adds.

Earlier this week, Samhällsnytt could report that 2019 was a record year for the Net Hate Examiner’s operations.

Thereto all the damages those convicted are forced to pay, some SEK 25 million.

Swedish taxpayers have to cough up more than SEK 325 million yearly for the sole pleasure of having opinions prosecuted and thought criminals convicted.