This week’s selection from Dymphna’s Greatest Hits discusses the antics of the Church of England as put on display back in June of 2005. I wish I could say that the situation in the Anglican Church has improved since then, but as far as I know it has deteriorated even further.

Note: Only one of the embedded links in the original post is still live. I had to remove the rest. 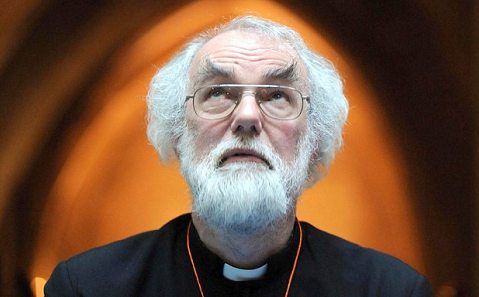 by Dymphna
Originally published on June 27, 2005

The Pharisees are in the driver’s seat of the Mini Cooper that has become the Anglican Church in England. Following the map printed up for them by the Anglican Peace and Justice Network, the C. of E. is busy driving over the cliff. How could anyone with a lick of common sense believe one word coming from a “Peace and Justice” committee? Did these people sleep through the birth and (Deo gratias) death of Communism? Do they not see the bright neon socialist signage in “Peace” or “Justice” — good Lord, never mind the double whammy PEACE and JUSTICE.

Does the Anglican Communion in England have any idea how irrelevant it is? The Incredible Shrinking Church has just shriveled another centimeter or two. It’s sooo bad it’s embarrassing. You could go read the report here (it’s a PDF. You’ll need version 7), but why bother. You can recite the p.c. lines from memory by now: poor Palestinians, bad Jews. Let’s take our money away from the bad Jews and give it to the deserving Palestinians who only want peace but the Jews are too mean to let them have it. Blah. Blah.

Well, we knew it was coming; this was just a matter of waiting for the final mainstream sheep farm to sell out. The only surprise is that it took so long. Here’s Melanie Phillips’ take on this “defining moment” —

The APJN report is full of the most inflammatory lies, libels and distortions about Israel — and the fact that the amended resolution that was finally passed only welcomed part of it (a weaselly caveat to provide deniability) does not alter the fact that it provided the ammunition for a poisonous onslaught against Israel. The document uncritically reproduced the Arab propaganda version of Israel’s history and the present circumstances of the Middle East conflict, presenting the Arab perpetrators of genocidal mass murder as victims and their real victims as oppressors merely for trying to defend themselves. But then what can one expect of a report which concludes by referring to ‘the honor of meeting the President of the Palestinian Authority, the late Yasser Arafat, who so warmly welcomed us in what turned out to be one of his last days among us’?

A warm welcome from the late pederast himself. How charming. Arafat was the father of terrorism, a diabolical Communist and one of the most truly evil people of his generation, so of course the Anglican Peace and Justice Network loved him. What’s not to love? Do you suppose they have a position paper on Castro, too? Another honorable sweetie-pie.

There are not words to describe the moral revulsion the name Arafat engenders. You could perhaps see why the naïve could be taken in by the man-in-the-street Palestinian: they’ve had years to work on and perfect their royal sense of resentful entitlement. And you might even decide to overlook the festering sores on a culture which produces suicide bombers who want to attack the hospital that treated them. But information on Arafat is readily available; his shameful history is there for the reading. One has to be willfully blind to refuse to acknowledge the depth and breadth of his malevolent iniquity.
This is a grievous moment. The beautiful Anglican tradition, its sacramental life, its Scriptural authority — all sold for a few pieces of agitprop dung. And there is no C.S. Lewis to turn us around, no transcendent generosity, none. Into the silence drop the neutered utterings from the current Archbishop of Canterbury. St. Augustine he is not.

So we pick up our prayerbooks, take a deep breath and head out into the world to put our money to better use: let’s find a practical way to invest in Israel before we get trampled by the sheep.

In my heart of hearts, I hope Lambeth Palace is cut up into council housing.