This week’s edition of Dymphna’s Greatest Hits is a follow-up to last week’s, which discussed Annie Jacobsen’s encounter with the Syrian trombonists. This one is a review of Ms. Jacobsen’s book.

It’s All for Show 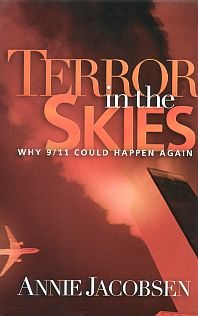 Does the accumulation of four years without further terrorist attacks make you feel safer when you fly? It shouldn’t. The Bureaucratic Bunglers are out in full force and with them in charge you don’t have a prayer. Or rather, all you do have is prayer.

According to Annie Jacobsen, we’d better do our homework on this one because there is no one watching out for us. Back in April, Gates of Vienna posted on Ms. Jacobsen’s tenacity and her willingness to follow this story wherever it led. That post, “Silence of the Sheep,” proved that the author is a sheepdog indeed. Her interviews with other passengers, with government agencies, with the House Judiciary Committee, with airline personnel, and with individual people who bear the day-to-day hazard of working in this field, have made her case. The tale of her experiences is documented well in Terror in the Skies.

Let’s take just one: FAMS. This is bureaucratese for the Federal Air Marshal program. You know the old joke that goes “you’re ugly and your mother dresses you funny”? Well, for this program, the first part may or may not be the case, but for the second premise — being dressed funny — you can count on FAMS. Due to the boneheaded policies of those in charge, Federal Air Marshals are required to wear sport coats and collared shirts. Yes, that’s right: they must look like Federal Air Marshals at all times because they are a reflection of FAMS and dressing in a slovenly disguise would somehow bring disgrace to the organization. Comments about being a lovely corpse would be appropriate here.

Then there’s what they do after they’re up and dressed. Remember, they’re carrying guns, right? So obviously they can’t go through security. However, there’s a second obvious thing they can do — they can fight the current and walk through the exit lanes for deplaning passengers. How’s that for subterfuge?

Let’s see, what other behaviors might they carry out to make themselves more obvious? Pre-boarding is one trick they have down well. So is always riding in first class.

And there you have the FAMS spotter information: check out the guys in first class in the sports coats who got on the plane before you. But don’t worry. Any terrorists on board sussed to their tricks a long time ago. They know exactly who they have to take out first, provided that any “taking out” is even necessary. If you’re going to detonate in the restroom, what do you care where the Federal Marshals are? They’re coming with you anyway.

Annie Jacobsen makes a good case for the fact that her flight, 327 on Northwest Airlines, was a “probe,” a dry run practice. And she backs up her contention with:

Near the end of the book Ms. Jacobsen recounts a conversation with an air marshal. She asked him to explain what he meant when he said “it was all for show.” Here’ what he told her:

You know how you’d go to the airport, before 9/11, and an agent there, somebody who worked for the airlines would say to you, “Did you pack your own bags?” Well, it was all for show. Those agents weren’t trained in detecting whether or not someone was lying. The procedure was there to make the flying public feel good. That’s what happened with 327. They all came running like in the movies, but it was all for show. Who interviewed the men? FAMS. We’re not trained in interviewing terror suspects. We don’t know what to look for. And the FBI at the airport? I won’t go there. Who really should have been there? ICE. Period. ICE. But they weren’t. Why? Because management says probes aren’t happening on airplanes. The guys were there to make the passengers feet good, nothing more, nothing less.

Two years ago, I had a probing incident. It may have been one of the first. After it happened, no one knew what to do, there was no protocol. The guys involved in the incident sailed off into the crowd. What was I going to do? Run up, tap the guy on the shoulder and say, “I almost shot you, now I’d like to interview you?”

Instead, I filed a report about my probing incident. Basically I was told “it didn’t happen “ Well, it did happen. Probes have been happening ever since. I doubt anybody ever even remotely considered you’d attract the kind of press you did. But you did. That’s a good thing.’

Now you know. Annie Jacobsen’s intuitions about Flight 327 were correct. But you know even more: the official response to 9/11 is all for show — boondoggle and brouhaha and folderol and CYA.

Perhaps we should fly the friendly skies of El Al. They know security; they take it in with their mothers’ milk.

DISCLOSURE: Spence Publishing sent me this book for review purposes. This post, which I will also place in Amazon (see link above), serves as my part of the original agreement made with them that were I sent a copy, I would review Ms. Jacobsen’s book. I recommend it highly. There is an excellent bibliography, a glossary of federal acronyms, and extensive notes and back-up for her assertions. The only flaw is the lack of an index. This can be annoying if you’re looking for specifics — e.g., her description of El Al’s rigorous security for all its flights.

By the way, Kevin Jacobsen, her husband, was initially so put off by the behavior of the fifteen Arab “musicians” on board the flight that he seriously contemplated faking a heart attack in order to get out of the plane before takeoff. Lacking the audacity to carry that out (a courage he no doubt has acquired by now) Mr. Jacobsen sat frozen through the flight, pen in hand, ready to fend off the terrorists. It may seem a futile gesture here on the ground, but it is speaks to the level of his fear for himself and his family.

Me, I’m going to do that old Red Foxx imitation. You know, the one where he clutches his chest and looks heavenward and says piteously “I’m comin’ Lisabeth, I’m comin’…” Even now I am practicing the necessary histrionics in case I’m ever stupid enough to get on a plane other than El Al.