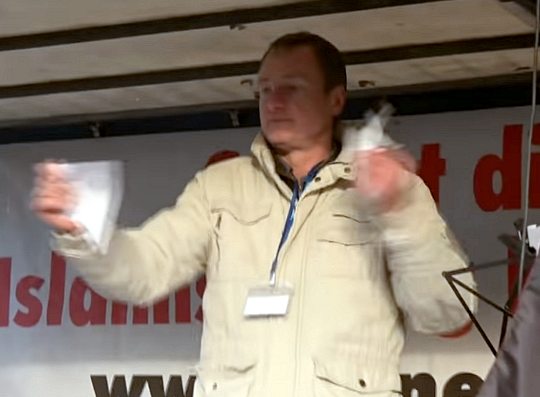 Many thanks to JLH for translating this essay from Politically Incorrect:

The Fight Against the Immigration Pact is Just Beginning

As I was participating in a massive walk right through the part of Dresden that I mentioned in my speech about the ideological garbage dump called the “migration pact,” André Poggenburg told me I should have incinerated the thing in my speech. I intended to remedy that on December 16th at Pegida, but, since Lutz Bachmann — tongue in cheek — was standing next to me with a fire extinguisher, I decided “just” to shred it. Even that shows our uncompromising determination to fight this treaty that will destroy our German homeland until it is declared null and void.

This could be one of the most important components of our existential battle in 2019 against Islamization, the Mohammedan mass invasion and infiltration of our society by leftist extreme ideologues. We must never allow illegal folk migrations to be declared legal, or masses to stream into our social systems, or ourselves to smooth the way for them, or the opening of all gates, or opening our legal system to their complaints, while the media paint it all in a positive light. Therefore all “Relotiuses”[1] among the journalists shall be outed and their destructive media work instantly halted.

And that applies to the unbalanced leftist elements in politics. In my talk, I characterized the cadre training units — the Jusos [young socialists] — in the SPD [Socialist Party], for example, as spiritual murderers, because they seriously support the abortion of near-term babies. This spiritually degraded pack are the progeny of all the 35-year-old and younger members of the Sharia Party of Germany, who are now demanding the expulsion of the few remaining clear-thinking members. Thilo Sarrazin, for example, is supposed to have done the party “great harm” with his book “Hostile Takeover: How Islam hinders progress and threatens society.”

We can only wish these leftist boneheads happy trails on the way to their own destruction. These inveterate anti-patriots have achieved unanimity among themselves in the East, and if they keep on working against the will of the people, they could fall below 5% in the provincial election in Saxony this coming year.

The CDU [Christian Democrats, Merkel’s party] is in lockstep with the SPD, when it come to self-Turkization. So the chubby Aiman Mayzek, chair of the Central Council of Muslims, was perching fat and happy in the third row of the CDU national convention, like a star guest. The Islam-collaborators in the “Christian” Democrats don’t choose to recognize that the aforementioned central council is a playground for extremely dangerous Muslim Brothers who are organized in the Islamic Community of Germany (IGD) and intend to turn Germany into an Islamic theocracy.

At the convention, an ethnic Turkish CDU Muslim sang a hymn of praise to Merkel for her opening of the border in 2015, which was “ a humanitarian achievement.” But, as every Muslim knows, it was actually the beginning of the mass Mohammedan invasion of Germany.

In Dresden, I also denounced the permeation of the German justice system by sharia. For instance, the supreme court erroneously decided that German regulations on the banning of child marriages are unconstitutional. A Syrian with a fourteen-year-old wife, who was also his cousin, had made a legal complaint. Welcome to centuries-old Islamic incest. This catastrophic decision by the tolerance-besotted supreme court means no more or less than sharia before the constitution. Constitutional law is buckling across the board. Islamization is rolling over the rule of law.

Nevertheless, I evaluate these insane phenomena as the last convulsions of the multiculti fanatics, welcoming-culture fetishists, tolerance idiots and Islam butt-kissers, whose time is gradually running out. Pace-setters for the turnaround are the mentally sound politicians in East Europe, such as the Czech parliamentary representative Jiri Kobza of the party of Freedom and Democracy:

“Islam is not a religion of peace, if it calls for the killing of infidels. I and my party call for completely forbidding Islam on Czech soil.”

Time constraints did not allow me to mention that the Chinese, too, have recognized the signs of the times, Because they are being terrorized by the Turkic Muslim Uyghurs, they have banned the Koran as an extremist book, as well as headscarves, long Muslim beards and prayer rugs. They have put fundamentalist Muslims in re-training camps, where the “true believers” receive psychological treatment, behavioral correction and an ideological education, in order to dispose of their extremism. Plus vocational training, language instruction and legal education.

Besides that, the Chinese are waging a battle against “halalization” — the insane war against everything that comes from the pig, and leads into the “morass of extremism.” A million Mohammedans are being re-trained, and that amounts to de-Islamizing. For Western democrats, that is pie-in-the-sky, and cannot be done in a constitutional state. But the time will come when Islamic terrorism escalates, leading to apocalyptic conditions. Either Islam will be de-fanged of its dangerous elements, or removed from Germany and Europe.

Since there were almost a dozen first-rate speakers at the Christmas Sing in Dresden, and speaking time was short, I could not mention the rapid advance of Islamization in Hamburg, so I mention it here. When I was in the Hansa city on November 7th to participate in the “Merkel-must-go” demonstration, I looked over the railroad quarter and characterized it in my speech as an “Islamic occupied zone.” The Hamburger Abendblatt commented skeptically:

A month later, the Hamburger Morgenpost published the investigations of the Arabic-speaking undercover reporter, Shams Ul-Haq, who reported on at least 20 mosques behind the Hamburg main train station. Furthermore, reports were that there was preaching in numerous backrooms and residences. Islamic instruction had systematically infected even small children with Salafist thought. Hamburg was an Islamic hot spot. By way of refugee camps, uncontrollable and problematic people had come to Germany, among them Taliban and Salafists. The threat potential for our society should not be underestimated.

That completely confirmed my observations. Once again, it is obvious how naïvely great slices of the German media, establishment politicians and church functionaries deal with this existential threat to our country. Eyes closed, ears blocked — above all, their own leftist ideological ideas must not be shaken.

We have a long way to go to reach enlightenment. But we will walk that path until we reach our goal, and we can once again celebrate a joyous Christmas season without Islamic terrorism, and a happy New Year without Muslim rapes.

Thanks to Egri Nök for the screen cap of Michael Stürzenberger ripping up the UN Migration Pact.

8 thoughts on “Michael Stürzenberger: The Fight Against the Immigration Pact is Just Beginning”