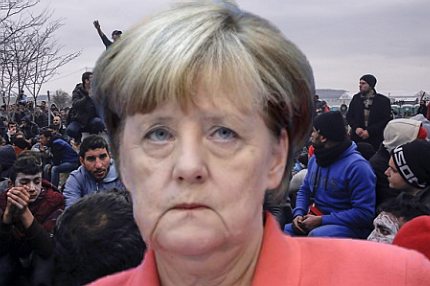 Many thanks to JLH for translating Hans Heckel’s latest column from Preußische Allgemeine Zeitung:

How that could happen to us; why Europe is in danger “from below”; and how we did a “180” without noticing.

The Week in Review
by Hans Heckel

The tightrope walkers took a fall too soon to celebrate the chancellor’s political end. Merkeldämmerung? Nope. Her departure as chair of the CDU was not a flight, but a crafty chess move. Now three candidates for succession are beating each other up, accompanied by former adherents in the same party.

Merkel, meanwhile, does what she does best — nothing. Is anyone criticizing her for that? And even if they are, none of it penetrates the government’s official and media screen to reach the outside world.

Even the scurrilous debate over the “obligatory-but-unbinding” UN immigration pact rolls off her like water off a duck’s back. Even now that it is ever more evident that this patchwork of deception essentially issued from the chancellor’s own incubator and only then found its way to the United Nations. Nobody is asking her what she was thinking. Her party is mired in the confusion of half-truths and stapled-together lies, with not a breath about it heard in the chancellery.

Several things go wrong at the last moment. The truth about the immigration pact coming to light too soon can only be assessed as a failure of stage management. No one expected that, so no serviceable back-up lie was worked out. Just as bad, no one had filled the clip with unanswerable arguments to be fired off in timely fashion for the political destruction of any critics. A real disaster.

On better-defended fronts — as Friedrich Merz discovered — unanswerable arguments were still functioning smoothly. The hopeful candidate for CDU chair dared to enunciate a confidential truth — that Germany is the only country which offers individual asylum to all of mankind… There should an implementation law placing a restriction on this right. Then the storm broke. From the left, to be sure, but also from his own party. Annette Widmann-Mauz, leader of the Union of Women and the official responsible for integration, spoke “vehemently” against changing Germany’s right of asylum. And gave a very interesting reason. After all, we want “to work on a right of asylum in common with our partners.”

“Our partners?” They all have what Merz wants for Germany — a legal reservation. How can we unite with them, if we will not accommodate our law by one millimeter? Do we threaten “our partners” with war or monetary fines if they do not adopt our right to asylum in every particular?

This is reminiscent of 2015. When Merkel tried to bind the rest of the EU in the chains of Germany’s “welcoming culture.” But they wouldn’t tolerate that. After that, the British decided to pack their bags. Since then the chancellor has been “working on a European solution to the refugee question” with no visible progress in more than three years. Anyone who asks about it gets one of those Merkel sentences that even first-graders can repeat by heart: “It is a challenge.”

Anyway — “united Europe” — do we really want that? Should we even try it? It’s a dubious concoction. Motto, Europe “from the bottom.” It’s time to change sides — without anyone noticing.

What is dubious about it? “Europe from below” after all, is what “Europe from the top” has always wanted. Yes, but preferably according to the formula, with the proper slogans!

Like the wonderful “pulse for Europe” movement. That consisted of the slick-smooth secret-police-type thugs and representatives of “civil” (sponsored and directed by the state) organizations, waving their little banners before the seats of authority in Europe in praise of Jean-Claude Juncker and Mario Draghi.[1] Including a few dreamy grandmas and grandpas who were quite moved by the “involvement of the young people.”

In recent days, however, Europe “from below” showed its hateful, obstreperous face. On the French-German border, Poles, Czechs and Germans joined in companionship with their French comrades, the French “yellow vests” who have risen up against the next increase in the gas tax and in general against the exuberantly rampaging State. That is not how the “European society of citizens” had been envisioned — unbridled and uncurbed.

Time to change course swiftly and brutally. In the future, anyone who propagates “Europe from below” is no longer one of the gutmenschen, but is “dividing society,” practicing “rightist-populist hate crimes” and “fomenting hatred.”

Can we make this change without people seeing through it? Oh, we’ve done it dozens of times. For example, cast your mind back twenty years. At that time the “fears” and “sensitivities” of our neighbors were an all-purpose propaganda weapon in German debates. The accusation of fomenting such fears or hurting feelings on the other side of the German border was all but fatal.

That’s all gone today. In fact, it is acceptable to threaten Poland or Hungary with consequences if they do not care to subject themselves to the moral superpower in Berlin, or alternatively, to arrogantly lecture the Czechs. More: Anyone nowadays who counsels consideration for these neighbors will be harshly corrected. Oddly, this new German pomposity is founded on the same “lessons from history” that once provided the basis for sensitivity to the “fears of our neighbors.” You can do a 180 unnoticed, if you destroy the compass first.

It’s not the only course correction. It’s a little more complicated in the case of the Jews. Since some of them are more afraid now than before of being attacked by a fanatic Muslim, and (disturbed by) the fact that someone has called the Holocaust memorial a “monument to shame,” it’s hard to know how to steer the whole thing in the right direction, so it jettisons what needs to be jettisoned politically.

First of all, it will help to tweak the criminality statistics a little. The method’s first weaknesses are apparent in that the manipulation can hardly be missed, when the bawling anti-Jewish slogans of radical Muslims appear in the official record as (German) neo-Nazi.

There could come a time when this artifice will have to be abandoned, because it is just getting too stupid. Then what? The experience of our “eastern” neighbors portends nothing good for the Jews in this case. Nor for women. Violence in marriage is a major subject. A greater than average number of those seeking sanctuary from wife-beating men in women’s shelters have an immigration background. And Anna Baerbock is not happy about that, because it does not fit in her multiculti concept. The Greens leader maintains that religious affiliation and nationality have no influence on violence. And what of the numbers? Oh well, mistreatment of women is like the knife attacks — better not to talk about it, so as to prevent political “malpractice.”

Is this all insane? Yes, but that’s the way it is. At some point, every false morality drops its pants, and the bare a** comes into view.

15 thoughts on “Pants Down”