Seneca III sends these ruminations on the shape of things to come, from the Dystopia Formerly Known as England. 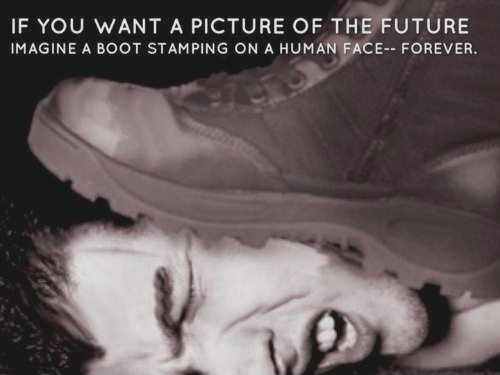 Corporate tyranny is the cancer at the heart of what is consuming our degraded civilization. The nations of Europe, the USA and indeed the whole world are groaning under despotic fiscal and social diktats implemented and sustained by the Central Committee of the NWO on which corporate beneficiaries and their bag-carriers have many seats. This whole unworkable construct is supported by an international banking cartel with a rotating paper debt, both sovereign and civil, that not only exceeds global GDP but is in fact a multiple of it.

Thus the inherent fragility of this system is moving it toward criticality, as it depends largely on dishonest and avaricious financial legerdemain supported by the application of political jackboots onto the necks of the worn and weary. The heart of this system is a draconian form of globalism which, because it is being imposed before a time when our species is sufficiently mature to collectively, willingly and peacefully encompass it, cannot succeed. Consequently, when this whole appalling house of cards collapses, it will do so suddenly and totally. The narrow escape we had in 2008, an ‘escape’ engineered by printing fiat money, or ‘Quantitative Easing’ as the corrupt and complicit political classes called it, has abjectly failed because inserting yet more pathogens into a gaping wound, be that wound either physiological, financial or social, will not cure an infection.

Hence, after the brutal depredations of the coming European and North American Liberation Wars, and when all the corporate and political predators, their Muslim and sub-Saharan foot soldiers and the well-meaning but naïve enablers and protectors of these evolutionary recidivists are either dead or gone, we will probably see business and life in general conducted on a much smaller, slower, bucolic scale, a scale more localized and more specific to a locale and its collective needs and inclinations.

It should be a simpler, more measured and loosely focused existence with a sound work ethic, but also time for unhurried family life and constructive leisure supported by a strong communal moral compass. What necessary technical, engineering, administrative urban and industrial conurbations as are necessary should be fewer and much smaller than at present, acutely efficient and firmly but fairly administered in terms of civil order and social conduct. They must not be permitted to live lives more indulgent, more healthy nor more privileged than those whose labours on the foundations of such a culture sustain them.

Government at any level must be as small as is workably possible and never a sinecured repository for hordes of the dependent and otherwise unemployable.

Without exception, educators must be required to educate not indoctrinate; there can be no compromise here, and the penalty for polluting young minds must be death.

Finally, I would like to add that despite the fact I am unlikely to live long enough to experience it, such a world lives strong in my dreams. For I, too, have dreams, even though I am in the late Autumn of my years and will never see them come to pass.

— Seneca III, in what is left of my beloved England this 18th day of September in the year 2018.