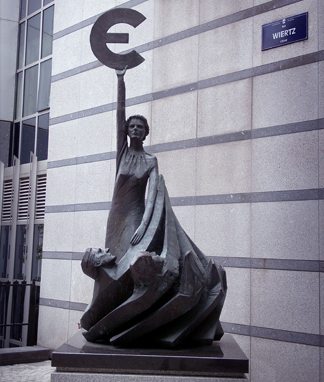 A reader in the UK sent us a donation yesterday, and included the following note:

I’d really like to see articles on what we can do to escape the cultural Marxists and the Muslims, for example anyone advocating secession or other more radical solutions.

Nothing is being done in the UK really, It’s just slow motion cultural suicide. And it’s not so slow these days.

He’s quite right: that’s an important and worthwhile topic. I’ve written about it in the past, and should be writing more about it nowadays, because it’s far more crucial than most of the other topics I cover . However, I tend to shy away from it, because the discussion in the comments on such a post always devolves to the same unhelpful recommendations.

People who contemplate the iron fist of Cultural Marxism — and the Muslim invaders it forces down the throats of Western culture — generally arrive at the same basic prescription: “We need to do X.”

Now, X could stand for any number of useful courses of action, but what all those have in common is that they have not been implemented in the past, are not being implemented now, and show no signs of being implemented within the foreseeable future. Those who advocate for them provide no step-by-step plan for how we might proceed from where we are now to reach the desired solution. There is no suggested course of practical political action. There is only “We need to do X.” Over and over and over again.

While we’re at it, we might as well wish for a magic pony.

According to the concerned citizens who advocate for drastic solutions, the things “we” need to do may include one or more of the following:

…And many, many more.

Yes, I agree that some or all of the above would be salubrious actions to take. I agree that Western nations would be better off if they started to implement such actions. However…

I’ve been doing this job for almost fourteen years (the last twelve of them full-time), and we are no closer now to taking even the tiniest step towards those solutions than we were when I started out. In a lot of ways things have gotten worse in those fourteen years, especially in Western Europe and Canada. And it’s not a whole lot better here in the USA, Donald Trump notwithstanding.

Western Man is teetering on tiptoe at the brink of the cultural precipice, and there is no sign that the drastic actions necessary to save him will be taken in time.

Since we started by talking about the UK, let’s take Britain as an example. Neither major party is going to take any significant steps to end the multicultural nightmare. It’s just not going to happen.

The only thing that might have a chance of pulling the country back from the precipice would be an election that would give UKIP an absolute majority in the House of Commons. And how likely is that?

The situation is similar in the rest of Western Europe, with the exception of Italy. Unless the Sweden Democrats and the PVV and the Front National and the AfD gain absolute majorities in their respective parliaments, there will be no change, because the other parties will gang up on the dissidents to form a cordon sanitaire made up of some improbable coalition of strange bedfellows, just to make sure the “right-wing extremists” never gain power.

So what “we” need to do is figure out how to get sensible, intelligent, morally straight people into political office. People who understand what needs to be done, and who have the brains, grit, and stamina to achieve it. People like, say, Viktor Orbán — whose ilk is as rare as hen’s teeth this side of the Iron Curtain.

That’s all “we” need to do. But I have no clue about how “we” might achieve it.

Anybody else got any ideas?