The following report by Egri Nök was published earlier at Vlad Tepes in a slightly different form. Egri also translated the video. Samir B. (right) with the ISIS terrorists Bilel H. (red cap) and Houssem H. in a Berlin restaurant. Photo: Facebook

An original translation from Bild:

Hannover — It is 11:42 AM when Samir B. (30) strolls into the Hannover State Labor Court in sweat pants and moccasins. The Islamist is suing Volkswagen.

The car manufacturer dismissed him in November 2016 because he threatened coworkers, and because he appeared to be leaving for ISIS territory. The German-Algerian had acted provocatively in the court’s hallway, filming the journalists present. A court clerk makes him delete the video, as he doesn’t have a permit to film.

The allegations against the assembly line worker (monthly net wage €3,500) are serious: Volkswagen were concerned that their employee might carry out an attack on the manufacturing plant in Wolfsburg. For example, at one of their workers’ caucus, where up to 10,000 workers attend.

BILD is documenting the case

It was late August 2014, when Samir B. was in a restaurant in Berlin-Kreuzberg. Next to him sat the Wolfsburgers Bilel H. and Houssem H. Both of them went to Syria shortly thereafter, and joined the Islamic State. Both of them are dead now!

They were part of the Wolfsburg terror cell. And it seems that Samir B. was involved in their activities more deeply than he wants to admit.

On December 28, 2014, Federal Police stopped him at Hannover airport — he had €9,350 in cash and a drone with him, Wolfsburger Nachrichten report.

The investigators are certain: B. wanted to travel to the Syrian war zone. His passport was confiscated.

According to VW’s lawyers and the Braunschweig District Court, it is an established fact that Samir B. “was involved in recruiting and supporting fighters from Wolfsburg”.

According to one investigator, Samir even drove the ISIS-recruiter Yassine O. and the two sentenced returnees Ayoub B. and Ebrahim H.B. to the airport.

The Islamist played it cool, just smiled arrogantly, when the judge read out the case. He had the stamps of Saudi Arabia, Egypt ad Turkey in his passport. From Turkey, he travelled three times over land and back by plane. 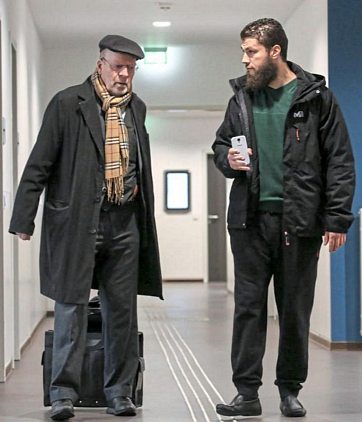 Hans-Eberhard Schultz (75) with Samir B. on the way to the courtroom

In the Wolfsburg shopping street, he and other future ISIS fighters handed out Korans and literature by the hate preacher Pierre Vogel. And that is not all: according to investigators, Samir threatened his colleagues in the tyre factory: “You are all going to die.”

According to VW, the workers feared their radical colleague more and more. Therefore the car manufacturer had no alternative but to dismiss him. On January 11, Samir B. got his passport back.

In Hannover, he puts it on the table in front of him defiantly. VW want to get rid of the man by any means; upon the judge’s advice, they even offer him a €65,000 settlement and a clean employment reference letter — the Islamist seems interested, asks repeatedly what net sum that would get for him. But his attorneys refuse the deal!

Then at 6:39pm the court hands down the verdict: They deem the dismissal invalid! VW had not been able to show that the company’s peace was manifestly disturbed.

This means: in four weeks, when the Islamist receives the written verdict, VW will have to let him work again. The car manufacturer still consider the dismissal valid, and will probably take it to the Federal Labor Court.

9 thoughts on “Volkswagen Not Allowed to Fire ISIS Mujahid”