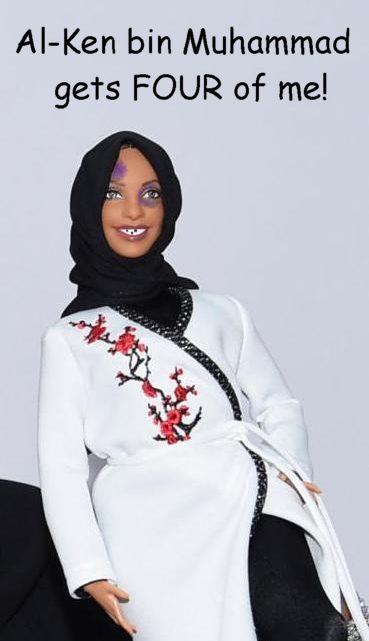 FISBEP is at it again, this time in Germany.

Many thanks to JLH for translating this article from Die Welt:

Now I’m an Islamophobic Agitator. Thanks! 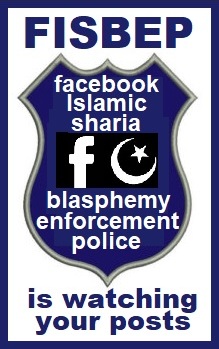 Facebook blocked me, because my opinion of a Barbie doll apparently does not conform with its community standards. I accept that, if it means a free life for all women.

Before yesterday, I had been honored with titles such as “anti-feminist,” “rightist,” ‘homophobe,” and “racist” or “Catholiban”[1], and also combinations such as “homophobic rightist” and recently — worst of all — “arch-conservative Catholic.” Can you see the sacrificial bonfire already burning in the background? As of yesterday, I know better — I am now an Islamophobic agitator. Thanks!

In this country, it doesn’t take much to acquire such names. Thus far, Facebook has blocked me for 7 days, because my opinion about a new doll by Mattel apparently does not conform to the community standards of the social media platform. It’s too bad that I did not go into ecstasies of enthusiasm over a new Barbie doll in hijab, which is intended to open a completely new market for the international toymaker, and in the process bring the friendly face of obligatory veiling and oppression of women in Islamic countries worldwide into the rooms of little girls.

Criticism of Headscarf Barbie is apparently too much for the virtue guardians of Islam. A seven days’ ban on Facebook. Twitter is apparently more in favor of freedom of opinion.

It’s also not good that this Barbie is designed on the model of a female athlete. The suppression of women is no athletics field and no playground, but, for millions of women all over the world, bitterly and deadly serious.

And so the question comes to me — will there now be a Barbie house, where dear Ken can have his Barbie whipped or stoned, if she wants to take off the handsome hijab? Facebook informed me that this sentence and the entire post were erased, and I was being suspended for seven days. Understand: I was, after all, attacking the people of a religious community — that’s a no-no. The gentlemen of Islam do have a right to free practice of religion and their traditions.

One person’s Sunday church service is another person’s stoning. We are, after all, in favor of diversity. It’s only an article of clothing. And you can get it in bright colors, so that it is pleasing to women. So now it’s possible not only to beautify the language of oppression, but also its clothing. And isn’t it wonderful when little girls practice style consciousness in the doll house, tying the bits of cloth together properly?

So Weinstein and Company Can Look Around

Maybe I should have taken my lead from my colleague at the Zeit, who unerringly recognized that the new Hijab Barbie had “emancipated herself” with this new look. At last, no more miniskirt or bikini, but demurely covered. Fabulous, this emancipation. The words “emancipated” and “veiled” would only occur to me in one sentence under threat of torture. If you want to try that out, you should take to heart the recent post in Huffington Post. The author lectures exhaustively on why female Muslims are the true feminists.

They are respectful of their bodies and will not submit to the dictates of the West, which has made the surface of the body an object of display and lust. The burka as the key to emancipation. So those old guys Weinstein, Brüderle[2] and company can take a look — we deny them the sight of our beautiful bodies.

I had barely lifted my head off the table where it had dropped from shock, when another — female — colleague of the Zeit entered the picture. In the middle of the overheated #MeToo debate, some of my fellow females are blowing out the cyber synapses.

On the grounds of emancipation, she, too, recommended that women eschew make-up, sprucing up their looks, showing off their beauty. Freedom through ugliness. Freedom through clothes that no longer emphasize the body, let alone the figure.

This is similar to the female Greens in Berlin, who monitor public displays and remove every poster with women in bikinis, to protect the dignity of women. Back to baggy, unprepossessing clothing, not to reveal the woman’s charms, but to cover them. Give up public nudity. Pierre Vogel[3] could not have formulated it better.

With astonishing speed, feminists (!) are rushing to be supporters of radical Islamic ideas. Those same women who would have a respiratory paroxysm and intuit a sexist attack, a suppression of their intellect and the whole patriarchal structure, if a man were to pay them a compliment, are the ones who trivialize the headscarf or even the hijab as a stylistic article of clothing.

Anyone who points out that this headscarf is a political symbol, the wearing of which manifests the inferiority of women and the inequality of men and woman is considered — and not just on Facebook — a rabble-rouser, racist and Islamophobe. So I have transgressed Facebook‘s community standards by condemning headscarves for children’s rooms. Happy to do it. I’d do it again. Because, in the community standards of this country — we call it the constitution — there are things like equality of men and women. Freedom of religion is there, as well as permission to be free of religion. And recorded there too are the freedom of the press and the freedom of expression.

Today, by the way, is the “Day of Imprisoned Writers.” It is intended to remind us of authors all over the world who suffer severe repression because of their writings. I would like to commemorate here the women writers and bloggers worldwide, and the women activists in Muslim countries, some of whom are in mortal danger as they write to advance the freedom of women. Who fight for de-veiling, for the right to remove their headscarves in public for the first time without fear of imprisonment.

Veiled Barbies are not a sign of tolerance, but a rabbit punch for the courageous women all over the world who need and deserve our support. I am happy to accept seven days without Facebook, if it signals a free life for women everywhere.

Birgit Kelle filed suit against her Facebook ban. The ban was accordingly lifted after 24 hours.

Wow! My attorney, Joachim Steinhoefel, knows his stuff. The seven-day ban was lifted after 24 hours. Thanks to all those who supported me and were outraged at a kind of censorship from Facebook, which we should not accept.