Last month a truck jihad attack by Islamic terrorists killed fifteen people in Barcelona, the capital of Catalonia. In the wake of the attack, local media outlets hunted for picturesque Muslims to interview about the reaction of the Muslim community to what had happened.

The young woman below is one such interviewee. Notice how well-versed she is in the multiculti lingo — diversity, difference, exclusion, stigmatization, etc. She’s a fitting spokescreature for Modern Multicultural Catalonia.

Pampasnasturtium, who translated the interview for Gates of Vienna, includes this note about the aftermath of the slaughter in Barcelona:

If you ever wondered what happened in Paris, London, etc. to those huge piles of phony garbage (teddy bears, candles, etc.), well, Barcelona is cleaning them, classifying them, digitalizing them all, and storing them safely in the Museum of History of the city — so the archaeologists of the future may have a slightly less puzzling picture of how we committed civilizational suicide.

The translated article from the Catalonian daily El Punt Avui:

“We have no young imams who know the streets”

“When they tell me ‘Go back to your country’, I don’t know where to go to. We’re neither from here nor from there” 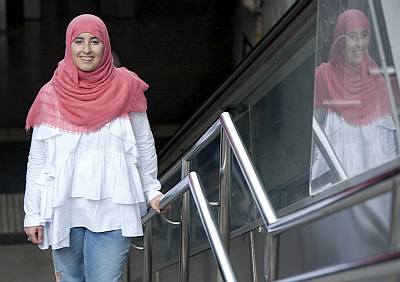 [Caption: Cheima El Jebary, one of the young Muslimas who have their appointment books full these days to talk about their community]

Muslim guys and girls took the bull by the horns and came out repudiating the attacks of 17h and 18th of August. One of the organizers is Cheima El Jebary Amisnaou. She studies Social Work, takes part in different associations, and she’s an activist concerning gender issues. “Being the only hijab-wearing Muslim in class is not a success, I’ve left family and friends on the way,” she complains very critically.

Cheima El Jebary (Barcelona, 1995) is the branches coordinator for the Multicultural Muslim Youth Association and studies Social Work at Barcelona University. She had just arrived back from holiday in Morocco on Thursday the 17th, when fifteen persons died in terrorist attacks in Barcelona and Cambrils.

9 thoughts on “The Trials of a Young Muslima in Catalonia”