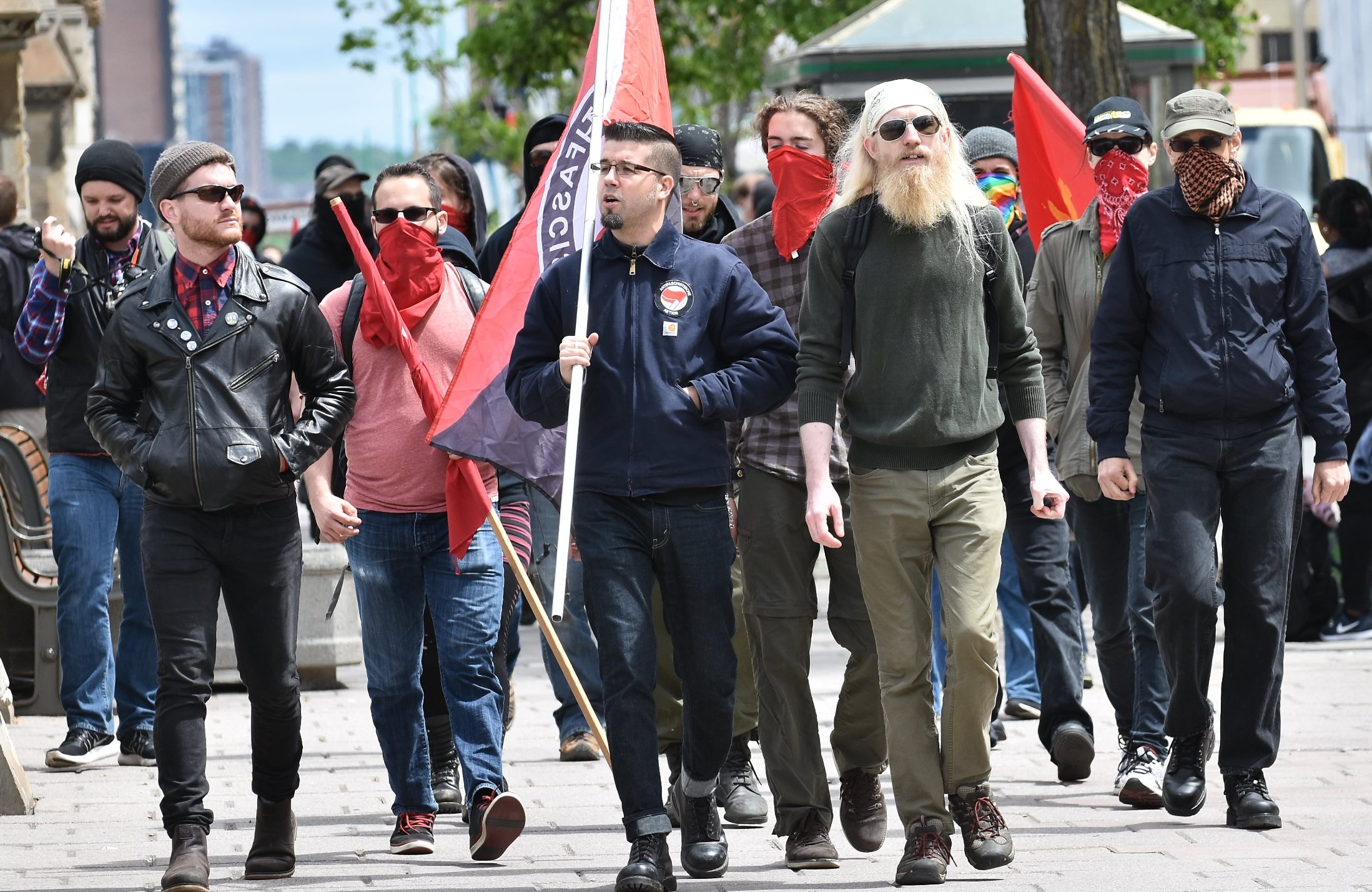 The “anti-fascists” were busy today, beavering away in opposition to free speech in Ottawa and using slings to throw rocks at police in Gothenburg.

It would be useful to step back from the specific actions of these antifas, and attempt to grasp the larger forces at work. But first let’s take a look at what happened today.

Regular readers have seen numerous translations here from the Czech and Slovak by Xanthippa, who relocated to Canada from Czechoslovakia when it was a Socialist Republic and the Iron Curtain was still in place. Xanthippa went to Parliament Hill in Ottawa this afternoon to speak at a free speech rally, which was beset — as such rallies always are — by violent “anti-fascist” protesters. She left this comment at our blog after she returned home:

Just came back from a Free Speech rally on Canada’s Parliament Hill.

About 30 to 50 of us, and the 500 or so (many paid for) Antifa/Labour Unions/Communists (yes, they were flying the Soviet flag) repeatedly tried to rush us and do us bodily harm.

RCMP, some in full riot gear, some with powerful-looking weapons, held them back, but the Antifa+ thugs kept rushing them, squeezing us into smaller and smaller area before ordering and escorting us off the Hill.

We could not even take our equipment with us, had to return for it ‘later’.

After she returned from the front lines on Parliament Hill, Xanthippa was interviewed about the day’s events:

And here’s an account of what happened by a member of a group called the Proud Boys. Near the end of this clip you can hear the antifas chanting “Nazi scum — off our streets!”:

The antifas also took exception to the opinions of anti-immigration activists in Quebec.

On the other side of the Atlantic, antifa forces thronged the streets of the Swedish city of Gothenburg. Their actions against the police were noticeably more violent than those of their counterparts in Ottawa, possibly because the Swedish police are more restrained in their responses than are the Mounties.

Here are two videos of the same event today in Gothenburg, showing the antics of Swedish antifas: Clip1,Clip 2.

Antifas have also been active recently in the USA. To get a sense of the extent to which things have escalated, watch Steven Crowder’s video about an undercover infiltration of Antifa that revealed their plans to use more serious weapons than rocks and sticks — weapons that can cause serious injury, or even death.

The “anti-fascists” have undoubtedly been busy elsewhere in the Western world, but these are just the reports that crossed my desk today.

The above accounts are fairly representative of the behavior of “anti-fascists” throughout the West. None of their actions should come as a surprise. So why not take a look at the larger picture, of which each black-masked stone-throwing flag-carrying antifa is just a miniscule part?

What we see here is what the antifas do whenever free-speech advocates or anti-immigration activists gather in groups of five or more. It’s very predictable: If you hold a rally in support of the First Amendment, you can expect a large crowd of black-masked thugs to show up and throw rocks at you (and you can also expect the media to report that “violence erupted” at the event, as if both sides were equally at fault — but that’s another story).

At this point, we should take a break from reporting on the atrocities perpetrated by the antifas, and instead try to examine the larger picture.

Imagine that I venture outside my front door during a violent thunderstorm. I get pelted by hailstones as large as golf balls, and almost get struck by lightning. I recoil in horror, hurry back inside, and close the door behind me. And then I show everyone else my video of the Sturm und Drang so they can appreciate what I just went through.

The next day, dark clouds gather again, and I go outside and repeat the same process.

And then the same thing the next day, and the day after that.

At some point I might want to look at the epi-phenomena that lie behind my terrifying experiences. I might want to study up on the thermodynamics of thunderstorms, or look into the meteorological records for my area to understand the weather patterns that lead to these violent tempests, rather than keep showing my videos of the hailstones whacking me on the top of the head.

That’s where we are with Antifa. That’s what they do, every time. They’re as predictable as hailstorms.

But the important question is: Why does this happen?

As I pointed out last fall: Until right after Trump was elected, the antifas hadn’t been seen in the USA in any significant numbers until after Hillary lost. Then, suddenly, they were everywhere.

And wherever they appear, their actions are more or less the same. Whether in Sweden or Canada or Berkeley, they wear the same masks, carry the same flags, and do the same violent things. Allowing for differences in language — and even those differences are not all that significant, since some of the signage is always in English — the antifas are remarkably uniform. 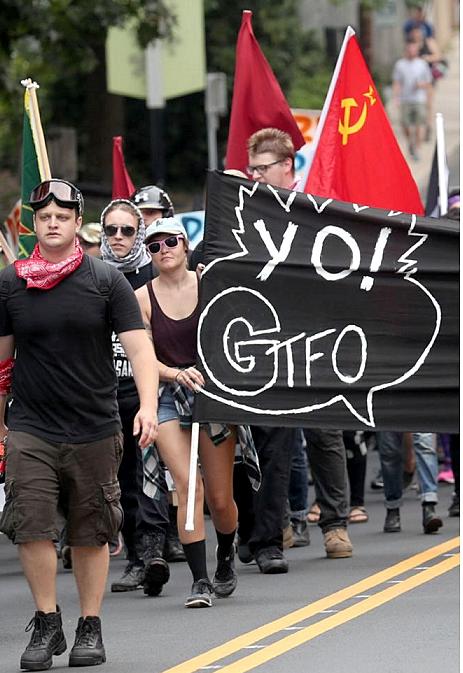 Yet the antifas’ cause is not very popular. Wherever polling is available, the opinions of the “anti-fascists” are always those of a small minority. How, then, do they manage to assemble so many violent demonstrators against so few of their opponents?

And the most important question of all: Who is paying for it?

In science fiction circles there is often a discussion about a phenomenon known as “Steam Engine Time”. The name refers to the invention of the steam engine in the 18th century. It happens that James Watt was credited with the invention, but it could have been any number of other people, because the idea of the steam engine was in the air at the time. The technology was there, the resources were there, the understanding of physics was there — it was steam engine time.

The idea of the steam engine was a distributed one — lots of people in different places using the same scientific theory and the same technology to come up with the same idea at about the same time.

Is the idea of “anti-fascism” also distributed? Is it emerging in more or less the same form in multiple places at about the same time, without any connection between its manifestations?

Or is there a central control structure that instructs the antifas to get out there on the streets and “Smash the Fash”?

I don’t have the answer to these questions. But they are the ones that beg to be urgently investigated.

Yes, we know that if you go out that door again, you’ll get pelted by hail. But where is the hail coming from?

Hat tips: For the Swedish videos, Da Capo; for the Quebec and Crowder videos, Vlad Tepes.