JLH has translated and annotated three articles on the upcoming German election from the same non-PC news outlet. 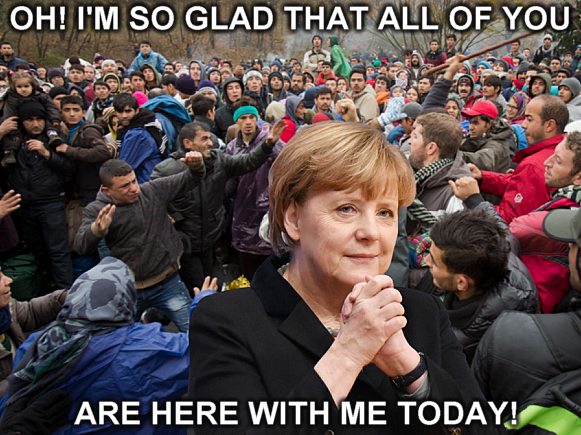 A Quantum of Merkel

Here are three articles from the Preußische Allgemeine Zeitung — one of the minority of German news carriers that have misplaced their rose-colored glasses.

First, some of the ominous developments in immigration, law and finance for Germans to look forward to:

What is in Store for Germany After the Election

The Republic will change after the September 24th election, but how?

In presenting the election program of the Union [CDU/CSU, Christian Democrats], Angela Merkel declared as a goal that everyone in Germany should be better off by the end of the next legislative period. And in fact, much points to the likelihood that conditions will change significantly in Germany in the next four years. Whether to the advantage of Germans is an open question.

With unaccustomed clarity and explicitness, in this year’s summer interview on ARD[1] the federal chancellor laid out asylum policy. She sternly declined the upper limit demanded by the CSU. “My attitude toward an upper limit is clear — that is, I will not accept it.” Taking present polls as a basis, there is ample indication of a continuation of present right-of-asylum and immigration in a fourth Merkel term.

Just the mass immigration since autumn of 2015 has changed the picture of Germany, reaching even into the smallest community. Most recently, since the notorious New Year’s Eve in Cologne and the terrorist attack on the Berlin Christmas Fair, it is also obvious that criminal activity and the danger of terrorism have risen along with mass immigration.

This, and the reactions of the Grand Coalition[2] allow the expectation that the social climate will change drastically in coming years. All of the parties thus far represented in the Bundestag adhere to the dogma of open borders. Instead of working against mass immigration, the Union and SPD are only trying to address its negative effects with new laws.

The result is that the liberal rule of law is taking on ever more characteristics that would have been unthinkable a few years ago. Bavaria, for instance, now has the possibility of preventive detention in case of serious suspicion of terrorism. Persons may be taken into so-called preventive custody if they may pose a danger to internal security. The number of Muslims who may be suspected of a terrorist attack climbs steadily. At the same time, surveillance of these threats to public safety ties up enormous numbers of police personnel.

So there are reasonable grounds for instituting a preventive custody as in Bavaria. There is nonetheless the danger of abuse. Once a police capability is introduced, instruments such as preventive custody can be used for purposes other than combatting and preventing terrorist acts — for instance, for political goals, as was the case with the “network tracking law” [aka the Facebook law], recently voted into law in the Bundestag in the shadow of the debate on “marriage for everyone.” According to this law, social internet providers like Facebook shall take quick action against hate speech or false news.

Lawyers and trade groups warned beforehand of disproportionate encroachment from the domain of Justice Minister Heiko Maas on freedom of press and speech by means of this law. The steady shrinking of the liberal concept of law under the impact of a fragmenting, multicultural, immigration society could be only one of may trends in the next legislative period.

The Union’s campaign promises of tax relief or SPD’s plans for an “opportunity account” with €2,000 for every qualified applicant notwithstanding, Germans will have to get used to higher financial burdens. As early as this Spring, the Bundestag’s scientific service determined that the care and integration of immigrants in 2016 will cost considerably more than had originally been calculated.

Bundestag Vice President Johannes Singhammer (CSU) summed it up for the Welt: “If you add up the expenses of all the federal states, 2016 cost €23 billion for immigrants and refugees.” Just bringing family members here will ensure that the expenses for this group of people will remain high for a comparatively long time. The Foreign Office estimates that soon 200,000 to 300,000 Syrian and Iraqi family members may be coming here.

It will not only be foreigners in Germany who will continue to cost Germans dearly in the future. Signs in the EU point to consolidating the euro-zone into a comprehensive (bank) transfer union. After a recent meeting with French President Emmanuel Macron, Chancellor Angela Merkel confided that she would present specific suggestions for a consolidation of the currency union, after the election.

Second, even though we know that politicians think nothing of lying when they need to, desperation can lead them too far:

AfD Can Be Happy

An act of desperation: Martin Schulz makes a campaign theme of the asylum crisis

Can you believe the SPD [Social Democrats]? Their candidate Martin Schulz is criticizing Merkel’s asylum and immigration policy and deservedly attracting anger.

The newest foray by Martin Schulz reveals the depth of desperation in the Social Democrat camp two months before the Bundestag election. The SPD leader incredibly chooses to criticize the chancellor for her asylum and immigration policy.

The answer from his coalition partner CSU was harsh and accurate: “Here someone is speaking about a new stream of refugees, and he himself rejected and contested all methods of controlling it. More deportations, more stable countries of origin, border controls and transit zones. Martin Schulz and the SPD have blocked them all,” is CSU General Secretary Andreas Scheuer’s retort to this astonishing attack by the SPD chair.

Apparently Schulz saw no other choice. His platitudes about “justice” and “hardworking people” went over like a lead balloon. By taking up asylum, Merkel’s challenger is pulling a subject out of the shadows that the established parties would have liked to steer far clear of, because they know a majority of the people is against them in this.

Even for the CSU, a serious immigration debate is divisive. Since the Summer of 2013 the Bavarians have been throwing demands (upper limit), threats and ultimatums at Chancellor Merkel. None of this uproar was followed by action. The demands echoed away, the ultimatums timed out and the threats remained empty.

Nevertheless, the CSU secretary-general is right to deny the SPD the position it has moved into as the main critic of an uncontrolled flow of immigration. Of the three coalition partners, it has the least claim.

Schulz can expect gratitude from only two directions. First, the critical voters who have hoped for a long, long time that the existential subject of immigration and border control would finally be discussed and the cartel of silence broken — for whatever motive.

Second, the AfD should send Schulz some flowers. In recent weeks, the young party has stopped its slide and stabilized at 7 to 8%, Now it can even dream of a rise. Besides internal quarrels and external hostilities, the conspiracy of silence had repressed them most. Previously the party had reached record heights talking of the failure of asylum and border controls. The “Alternative” had been declining since these subjects faded into the background. Thanks to Martin Schulz, these burning questions may now become the order of the day again.

Two Waves At One Time

Brutal asylum seekers shock Germany; the next wave is coming from Italy

The problems caused by radical Islamic asylum seekers are becoming ever more threatening, while the policy persists in its false dogmas.

Alarmed observers are talking about the second wave of illegal immigrants surging toward Germany. The reality, however, is even more dramatic, as shown by the bloodbath in Hamburg. And now two waves are crashing together.

First, there is the new wave of immigration now pouring into southern Italy. Politics and the notorious smuggler-enablers are doing their part to make this wave a really big one.

What occurred in Hamburg and reached its zenith, for now, in the Berlin Christmas Fair massacre, that is the other wave — a result of the radicalization of those already enticed here and allowed to enter. There, religious fanaticism is blended with the predictable lack of prospects in Germany facing hundreds of thousands of young men from the Near East, because they have no training and can’t (or won’t) adapt to Western culture.

Both these developments conjured up by policy will simultaneously rise to the surface. Correspondingly, the nervousness of those responsible is becoming palpable. So they are competing with one another in making worn-out recriminations and demands. More surveillance by the security services and the police? Hamburg alone has 800 Islamic extremists, and the attacker of Barmbek [the Hamburg supermarket where a jihadi with a knife killed 1 and injured 7] wasn’t even one of them. How do they propose “surveilling” this mass of people?

In their campaign platform, the CDU speaks of “resettlement” — i.e., finding a new home for asylum seekers in Germany. That does not sound like sending them back to the land they allegedly fled because of danger. Federal President Steinmeier talks about “integration” that would require “decades,” instead of returning them. SPD candidate Schulz promised Italy more “European solidarity” and means by that taking more asylum seekers off their hands. If necessary, EU countries can be forced to take them in. Robert Klinak, the Interior Minister of Slovakia, replies that when the roof is leaking, you don’t share the water — you repair the roof. In other words, secure the borders, instead of talking about “sharing refugees.”

Karin Göring-Eckart knows what will happen if EU partners like Slovakia close off access. The Greens leader asked extortionately on welt.de: “If no one will accept them, are you prepared to let people drown in the Mediterranean? I’m not.” Which means, if necessary, Germany will take them all.

Anyone who was hoping that Berlin’s politicians had actually learned from 2015 is bitterly disappointed. The next fiasco of ignorance is warming up for take-off.

18 thoughts on “A Quantum of Merkel”