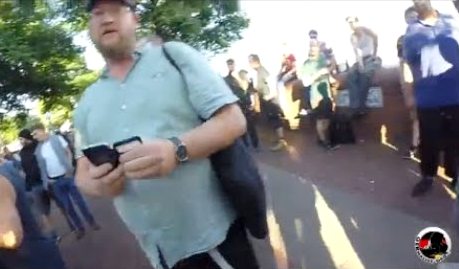 It’s been a busy summer for award-winning Swedish journalists.

The first one in the news was admittedly “Swedish” rather than Swedish, a mischievous Algerian named Farid Ikken who attacked police officers with a hammer outside Notre Dame Cathedral in Paris on June 6. Mr. Ikken got ventilated by the cops for his trouble, but survived, and will eventually face whatever passes for justice in Modern Multicultural France.

The second prize-winning Swedish journalist is an authentic Swede, a blond and presumably blue-eyed fellow named Mathias Wåg. To put it in a nutshell, last week, during the G20 riots in Hamburg, Mr. Wåg appeared to be acting as a target-spotter for Antifa. Based on the videos of those smoky events, he seemed to be consulting with various activists, pointing out journalists who needed to be beaten up.

In addition to being a stringer for the Swedish newspaper Expressen, Mathias Wåg works for an organization called the Research Group (Researchgruppen — see these posts in 2013, 2014, and 2015). The Research Group is part of a consortium of extreme-left organizations that act in effect as a collective intelligence agency for Antifa, with the tacit support of the Swedish state. EXPO is the most notorious, but the Research Group is right up there with it. Among other things, these earnest activists dox “neo-Nazi” politicians and journalists so that the “anti-fascists” can visit their homes and throw bricks through their windows or firebombs through their letterboxes.

Mathias Wåg took a road trip last week to help out the comrades who thronged the streets during the G20 summit, a-burnin’ and a-lootin’. Multiple videos of his involvement in those events have surfaced, one of them taken by some of the journalists who were beaten up.

The following compilation was taken from two reports on those events plus one of the videos. Many thanks to Tania Groth (Swedish) and Ava Lon (German) for the translations, and to Vlad Tepes for the subtitling.

First, a report published in Fria Tider on July 10:

Battered reporter to the man from Expressen: “You asked a crowd to beat me up”

It was Expressen‘s partner, Mathias Wåg, who asked a left-wing mob to beat up an American reporter in connection with the riots in Hamburg. That is what the victim himself, Marcus DiPaola, writes on Twitter.

The Research Group’s Mathias Wåg, who was once awarded the Golden Spade and works for Expressen, was captured on film when he took photos of a US reporter last week who was being beaten up by a group of left-wing extremists.

The reporter Marcus DiPaola from Heavy.com now tells Twitter that it was Mathias Wåg who told other left-wing extremists to attack him.

“Hi Mathias. Remember me? You asked a crowd to beat me up…” DiPaola writes. Marcus was beaten by the left-wing extremists and then repeatedly kicked as he lay on the ground.

“You’re the first journo I’ve met that asked others to beat me…” he continues.

Since Fria Tider wrote about the video clip on Sunday, another video from the event has been published. The clip clearly shows Mathias Wåg taking a brief look at Marcus DiPaola after the abuse, and that Wåg discusses identifying different people with the other left-wing extremists.

Since then the Expressen man has himself posted his pictures of DiPaola in a tweet aimed at the left-wing extremist Anti-Fascist Action in New York.

Mathias Wåg and other members of the Research Group were employed a few years ago by Expressen‘s editor-in-chief Thomas Mattsson to identify and expose private Swedish individuals who criticized immigration policy anonymously online. The left-wing extremists were later rewarded the Golden Spade, a prestigious journalism prize, for their efforts.

Fria Tider is looking for comments from Mathias Wåg.

The second report (already in English) was posted by Pål Bergström on July 10:

During the G20 meeting in Hamburg journalist Marcus DiPaola filming for heavy.com was attacked by extreme left demonstrators calling him a Nazi. Part of the attacking group or seemingly knowing them was the Swedish journalist Mathias Wåg. According to Marcus DiPaola he instigated the violence, that somewhat can be confirmed by the video above (Mathias Wåg in cap and light blue green shirt).

@guldfiske Hi Mathias. Remember me? You asked a crowd to beat me up. About me: I’m not a conflict or political journalist. (1/

Mathias Wåg is one of the founders of a group called Researchgruppen (Research Group). A network of journalists started in 2009 with the mission to map extreme right-wing environments. By some Mathias Wåg and others behind are accused of belonging to the violent left.

In 2014 Researchgruppen was awarded Guldspaden (Golden Shovel)an annual Swedish journalism award for revealing names of members of a well known Swedish forum where users are required to be anonymous but by Researchgruppen claimed to be right-wing extremists.

In another incident German journalist Max Bachmann was also attacked. So was Luke Rudkowski from WeAreChange.org. By pure coincidence they together with colleagues Tim Pool and Lauren Southern were all photographed in the same photo in Hamburg during the meeting. This was then spread in social media with a false claim that they are nazis. Probable reasoning behind the attack on Marcus DiPaola.

All but Lauren Southern are independent citizen journalist without political association. She is more right-wing though not extreme right, as I can tell, even if she seems to collaborate and move in groups with questionable motives. Still no reason to be exposed to hate or violence.

22 thoughts on “A Target-Spotter for Antifa in Hamburg?”