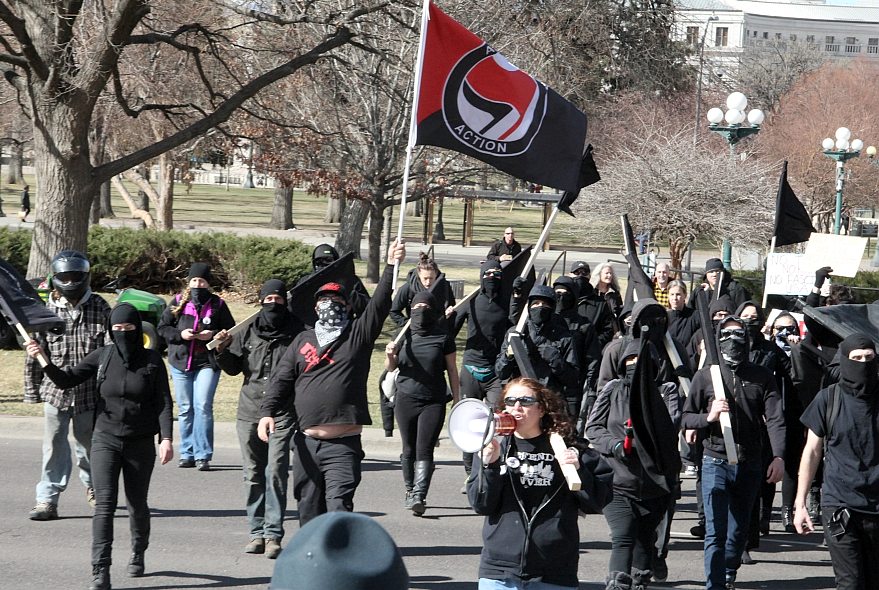 We’ve been posting about European Antifa groups for more than ten years. “Antifa” (or “anti-fa”) is short for “anti-fascist”, and the Antifas are prominent in almost any European demonstration or riot against the right wing. If a politician expresses sentiments that are even mildly nationalistic, or talks about limiting immigration, he can expect an Antifa manifestation outside his offices, complete with black clothing, black masks and hoods, flags and banners featuring logos and slogans of the Antifa and affiliated groups, burning trash containers, flung paving stones, and violent confrontations with police.

I learned about the Antifa was when I was first delving into the Danish anti-fascist scene. Back then (2007) a local manifestation of the anarchists known as the Autonomer was more prominent in Copenhagen than the Antifa; I don’t know if that’s still true. But the Antifa groups were dominant in Sweden, Germany, and the Netherlands. With the help of El Inglés and our Flemish correspondent VH, we posted a couple of investigative reports on the anti-fascist scene in Northern and Western Europe.

Since then it has become clear that the Antifas act as the enforcement arm of the permanent bureaucratic state in Europe; that is, the establishment that remains in place and manages political, cultural, and economic affairs regardless of which party is in power in any given country — what we now know as the “Deep State” here in the USA. Such functions are particularly concentrated in the bureaucracy of the European Union, which has no democratic component whatsoever — the European Parliament is a figurehead body (and a gravy train for those elected to it), lacking any significant power.

When the Antifas hit the streets, they do so in the interests of the entrenched European power structure. However, their funding comes from private sources, often those associated with George Soros, so that Brussels and the national governments can maintain plausible deniability. In order to understand the true nature of what’s going on, just watch the behavior of the police and the courts: despite the armored riot cops and swinging batons and black Marias, the Antifas are not seriously constrained in their violence, and any who actually get charged and convicted are sentenced lightly. Compare this process with what happens to any “right-wing extremist” group that expresses nationalist sentiments or opposes immigration — it can expect to be violently suppressed and prosecuted to the fullest extent of the law.

Remember the water cannons aimed at the anti-groping demonstrators in Cologne in early 2016? Did you ever see water cannons used against “anti-fascists” throwing bottles or paving stones? Me neither.

For all practical purposes, the Antifas are the Blackshirts of the European Union, even though the chain of command is occluded. It’s not like Germany in 1936 — Jean-Claude Juncker does not give orders to the commanders of the black-masked thugs who swarm the streets of Amsterdam or Stuttgart. By working through cutouts such as George Soros, the entrenched oligarchs of the EU can maintain their power without ever dirtying their virtual hands.

For the first decade of my work at Gates of Vienna I never saw any significant presence of Antifa in the United States. We had various flavors of communists and anarchists — Trotskyites, Maoists, Stalinists, International ANSWER, Occupy Whatever, etc. — but not the Antifas. But then suddenly everything changed…

As soon as Donald Trump was inaugurated on January 20, there they were, as if on cue — Antifa thugs breaking windows, burning vehicles, fighting with the police, and causing general mayhem. I recognized their banner immediately in the footage from the “protests” in D.C., Chicago, L.A., and elsewhere.

The photo at the top of this post was taken by Henrik Clausen yesterday at the pro-Trump rally in Denver, the same event at which Elisabeth Sabaditsch-Wolff spoke. As you can see, they are identical to their European counterparts in appearance, including the logo on their flag. The Denver police — evidently not yet under the full control of the New World Order — kept the “anti-fascists” well back from the rally, and did not let them interfere with it.

There were similar rallies all over the country yesterday, and I’d bet money that identical-looking Antifa groups staged “counter-demonstrations” at most of them.

The inauguration of Donald Trump was the trigger that caused them to appear. Funds were released and the deployment of shock troops on the streets was ordered by someone at the highest levels of the Deep State.

For all practical purposes, the Antifas are the Storm Troopers of the New World Order.

And now they’re here in the USA, patrolling the mean streets of our cities, ready to squash anyone who dares to oppose the implementation of borderless multiculturalism in the Nation Formerly Known as the United States of America.