A post (slightly edited for clarity, with editorial commentary supplied by GoV) from Nicolai Sennels’ site in Denmark.

Dr. Sennels wrote this a few days before Christmas, but it’s even more germane now: 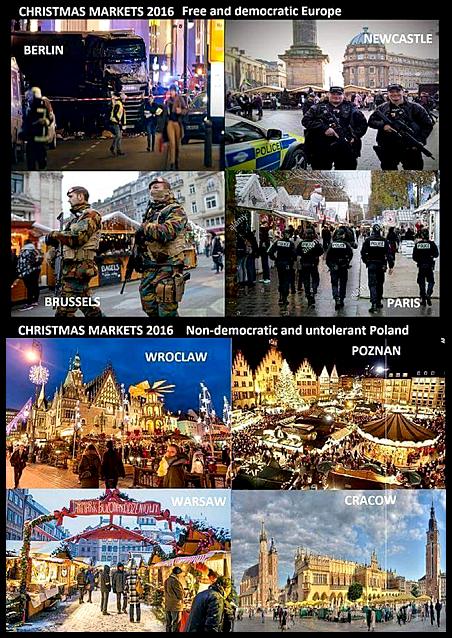 The above photos say everything: Countries with virtually no Muslim immigration can celebrate Christmas in peace, while West Europe needs to deploy heavily armed police to protect Christmas.

And if you haven’t noticed: It is no longer a shame to say publicly — at lunch at work, at Christmas dinners with family or friends, at Facebook — that “I think that Islam is a danger to our freedom and safety”… “I think we should stop Muslim immigration” or “We have more than enough mosques”.

[Note: On Facebook?? Perhaps for Danes it’s okay to say those things on FaceAche, but it’s dangerous if you’re German. Zuckerberg has become infamous for an increasingly repressive mind-set, but the biggest ‘tell’ on his soviet tendencies came when he sat next to Merkel at the UN and promised Angela he’d turn any German Facebook miscreants over to her.

For Germans in particular, Zuckerberg’s fiefdom is definitely not a SafeSpace when you hold views that diverge from Merkel’s narrative.

In fact, it was this deal with the devil that prompted our decision at Gates of Vienna to exit the Facebook swamp forthwith. It remains troubling that so many people continue to use FB’s “curated” news as their main source of information. As if the MSM weren’t bad enough. — D]

Everybody knows, and the few who don’t are becoming a small and ridiculous minority that should be ignored.

By the way: We will make a demonstration in front of the German embassy in Denmark very soon. With Europe’s open borders, Merkel’s immigration policy is putting everybody inside the Schengen in danger. We have to act.

Meanwhile, in the U.S., we don’t need no stinkin’ imports: we raise our own homegrown dhimmi Yutes. Here’s one summary report:

“Fights break out at malls across United States”

Massive brawls and food-court fights played out at more than a dozen malls across the country in what proved to be a chaotic day after Christmas.

[Note: This surely must be the American version of Boxing Day. A kind of epigenetic cultural memory which remained in vestigial form until awakened through the magic of technology. Way cool.]

Some of the mayhem was captured on social media. The chaos prevented some shoppers from grabbing clothes off clearance racks and returning gifts.

The mall incidents, which ranged from minor melees to mass evacuations, occurred from Colorado to Tennessee and Texas to New Jersey. Here’s what happened at nine of those malls…

The run-down is here, although a final tabulation remains to be done after all the precincts report in. We’ll have to wait to find out if these Yutes be reds or blues.

You’ll notice that the news stories reporting on this phenomenon, #BrawlAtTheMall, claim the wilding was spread via “social media”.

One may assume they’re referring to a particular social “medium”, i.e., friendly Facebook since the numbers of Yutes on Twitter are far smaller than those who populate FB’s pages. Same goes for Instagram. Thus their circumlocution, “social media”, allows the MSM to avoid reporting on one of our uglier ‘social’ realities, the phenomenon of wilding via FB postings. The fact of Zuckerberg’s far deeper pockets means that he could sue the pants off anyone who dared to even hint about the maybe-perhaps-could-be central role Facebook plays in the synchronization of any number of social meltdowns in the past several years. But everyone knows the truth anyway, whether or not Zuckerberg’s soviet forbids its utterance.

An intriguing parallel for your consideration, dear reader: Merkel and Zuckerberg inhabit the same universe of moral midgets. Cultural analysts will have a field day comparing and contrasting…oops; walk that back. They would have established a niche market of writers/publishers were it not for Z’s infamously thin skin. The true ‘narrative’ will have to wait until Zuck shuffles off this mortal coil and the copyrights owned by his heirs run out. In other words, don’t hold your breath.

Meanwhile, Z is no doubt bargaining to extend his stay through the wonders of technology. “Death, where is thy sting?” has been shanghaied from Paul’s Epistles for other employment. It is a song Zuckerberg sings in the shower.

32 thoughts on “Of Wildings, Muslim and Otherwise”