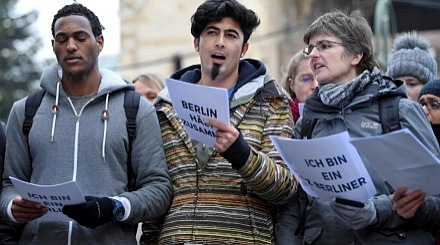 Many thanks to JLH for translating this essay from “The Daily Franz”, the conservative political blog of Marcus Franz, a concerned Austrian citizen and a Catholic.

Note: This piece was written several weeks before the truck jihad at the Christmas Market in Berlin:

Where There is Culture, There Will Be Conflict

The culture question is the central theme and logical destination in any serious thinking about mass immigration. The question is simple and clear: In the context of a longstanding folk migration, who will assume the cultural and social leadership? The inevitable answer will be an either/or, for there can only be one dominant culture. Cultural fusions are, of course, possible, but that is not a matter of quickly conducted courses on integration, intellectually dishonest and sanctimonious debates or bleeding-heart political statements; it is a matter of centuries.

What is significant in the intensification of the culture question is not so much the sheer number of immigrants, but rather the cultural strength or weakness of the infiltrated society, and, naturally, of the intruders. The more decentralized the society in question is, the easier is it for the philosophically homogeneous new arrivals to establish their own culture. A society like that of continental Europe, which persistently confuses liberal with random or arbitrary, constantly diversifies itself and devolves more and more into its individual parts, is an ideal target for any consistent, external culture supported by a spirit of conquest.

While it is no longer necessary to establish that it exists, for form’s sake we should introduce the subject: The multi-culti philosophy which regards itself as enlightened, and the Europeans who for a long time now have felt secretly superior because they are so tolerant, have both shattered on the reality of the no-go-areas and the ever-louder but intrinsically logical demands of the foreigners. To be sure, the responsible politicians position themselves and yammer about human rights, the obligation to help, and cooperative solutions which can only be achieved through efforts at integration, but really they all know the score: Without a clear and uncompromising message and visible and effective actions, a European state in the truest sense is no longer possible.

The clash of cultures is fully underway. Samuel Huntington’s prophecy of more than 20 years ago is being fulfilled — and right now. Another prophecy, namely that of Francis Fukuyama, who declared the end of history and the victory of capitalism after the fall of the Iron Curtain, has unfortunately faded away. As pathetic as it may sound, we are at a turning point. We have the choice of confrontation or subjugation.

Saying “culture” implies evaluation. And anyone who values his own culture must stick with it and say: It is mine, it is the best, and I will defend it. In the gigantic error of political correctness and the drunken rush of uncontrolled tolerance, we have forgotten ourselves, thinking too long of the patronizing, guilt-ridden European who has so much to make up for. And it has developed recently that good intentions are always the opposite of just plain good. In other words, a falsely understood, pseudo-moralistic burden of “goodness” has led us to this misery.

Now the much-despised “white European man” is faced with having to make decisions and answer questions that he had thought were long disposed of. He must say yes or no, and act accordingly. But he is beset by anxious questions. Is he still able to fight? May he do that as a cultivated European? Or is his cultivation really just degeneration? Is this white man a patriot and a warrior for his culture? And is he able to be?

Or is he just a post-democratic, estrogenized pipsqueak, who has to let others dictate his future? Will he have the courage to decide in the name of his culture what is right and what is not? And the most anxiety-drenched question of all, hanging over all others: Will he even be able to win this really nasty game?

I think he can, but only if he thinks about his traditions and the Western values formed in the name of Enlightenment and Christianity, and from that basis builds his old arguments anew and uncompromisingly.

20 thoughts on “Confrontation or Subjugation?”