Maria Theresa was the Regent of Austria and the Empress of the Holy Roman Empire during the middle of the18th century. Her statue stands on a tall pedestal at the center of Maria-Theresien-Platz in the heart of Vienna.

In the wee hours of this morning activists from the anti-Islamization group Identitäre Bewegung — the Austrian chapter of the Generation Identitaire movement — covered the statue of Maria Theresa with a burka (a niqab, actually, but the article calls it a burka).

Many thanks to Ava Lon for translating this article from Unzensuriert: 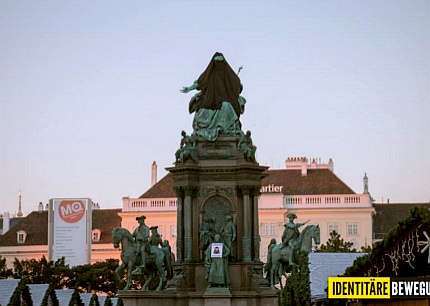 (Caption: To point out loss of national identity through Muslim immigration, Generation Identitaire concealed the statue of Maria Theresa with a burka.)

In another spectacular event, on the 29th of November members of the Identity Movement climbed up the statue of the former Regent of Austria, Maria Theresa. They concealed the monument at the Museumsplatz with a gigantic burka in order to specifically warn against being supplanted by Muslims.

The inspired Identitaires managed to cover the 20-meter-high Maria Theresa at night by means of a crane.

NO to loss of identity

Inspired by the highly celebrated state artist Christo, who likes to pack things and cover them, the activists utilized a gigantic burka and laid a sign at the feet of the ruler: “Islamization — No Thanks!”

On the movement’s website, the following explanation could be read after the action:

“If the politicians keep silent about Islamization, we must draw attention to it all the more clearly! Every day our country is a little bit more Islamized. In Muslim kindergartens in Austria, jihad against unbelievers is taught; individual perpetrators learn how to murder while screaming “Allahu Akhbar!”. Meanwhile, state-sanctioned Islamic experts are trying to convince us that all this has nothing to do with Islam and that Islamization isn’t taking place. Whoever dares to speak of this fact falls under suspicion of extremism and may even end up, in the worst-case scenario, in court.”

6 thoughts on “A Burka for Maria Theresa”