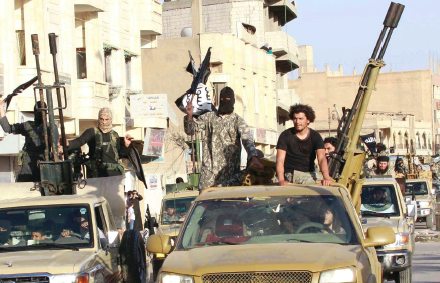 The following piece is a discussion from a Christian perspective of the spiritual vacuum that is being filled by Islam as the muhajirun begin their conquest of Europe. Many thanks to JLH for translating this article from the German-language site Katholisches.info:

90% Would Convert to Islam, if the Islamic State Came — A Generation With No Ideals

ROM: 90% would not hesitate to convert to Islam to save their own lives, if the Islamic State should conquer the country. This “shock result” (Il Giornale) was produced by a test of 13-year-olds in an Italian middle school. Only 2 of 25 students disagreed. Both of them are from devout Catholic families.

What Italian city or what school is neither here nor there. The subject of Islam and violence is being discussed everywhere. The phenomenon affects all of Europe. The Catholic internet daily Il Sussidiario reported on the third level of a random Italian middle school. All of the 25 students are 13-years-old. They too were talking about Islam. They wanted information from their teacher about the Islamic State. Who is that? What is its program? How does it operate?

“What Would You Do If the Islamic State Came to Your House?”

The teacher gave them information. And also reported that many fighters for the Islamic State came from Europe. Young Muslims of the second and third generation. Well-integrated, from well-to-do families, and many of them have even begun or completed university studies. One of the best-known executioners for the Islamic State was previously a well-known DJ. The teacher described for them how the Islamic State is destroying all Christian symbols and threatening to kill anyone who is not ready to convert to Islam. And she did not withhold the fact that many Christians were killed or enslaved because of their religion.

At the end, she asked them a question: “What would you do if the Islamic State came to your house?”

According to Il Giornale, “The answer was almost unanimous and shocking”. 23 of them declared without hesitation that they would convert to Islam. The two hold-outs were from practicing Catholic families.

“A Society With No Ideals”

Some people now will say that this was “not representative” and, first and foremost, the Islamic State danger in Europe is not real, so we should first see what the reaction would be, if it were real. That may be. Yet, this event is appropriate for some necessary reflection. It is better to recognize what is unpleasant than it is to suppress it. Both the attitude of the 23 as well as that of the other two students deserve comment. The first comment comes from the online daily Il Giornale and deserves to be our beginning. “It is clear that we live in a society without ideals.”

Christmas and Easter have been taken from the children and replaced by empty words like “winter” and “spring”, which have neither their own history nor the ability to move people to strive for higher goals. They are “value-neutral” words, which have no “face”, and therefore no true value. Ideals need a face. They must be tangible and personified, must be vibrant. The values imparted today are restricted to a level of not even secondary virtues. Don’t smoke. Eat healthy. Think politically correctly (which includes the gender-ideology — an anti-ideal that demands a self-alienation of the human being). In this canon of neutral values, however, there is nothing for which you would risk your life, nothing which could move and ignite soul and spirit.

We Have Been Robbed of Christ and Our History

We have been robbed of Christ and our history. By whom? Without our agreement — which seldom is given directly, but insidiously — nothing would be possible. Halb zog sie ihn, halb sank er hin.[1] Goethe’s words also apply to the de-idealization and de-Christianization of Europe. The theft of our own identity is proceeding on many levels. The result is this conclusion reached by 23 of 25 students. The summary of Il Giornale is: “We created this generation of children.”

The old Marxists, it is true, have been saying for 25 years that communism is dead, but whenever they hear the Internationale, they have to hold back the tears. We could laugh about Guareschi’s Don Camillo and Peppone[2], because we recognized ourselves there — we Catholics and we communists. The era of these novels and film characters is also our time. They told the truth with humor. They could still move us, because there was something serious behind them.

Since the fall of actual socialism, we have had only years of doubt, skepticism, gradual breakdown, suspicion, hatred, cunning and cynical manipulation. And now we are expected to tell our young people to take up weapons and defend themselves when the executioners of the Islamic State come? In the name of what ideals and values are we to ask that of them? In the name of those ideals we never taught them, but denigrated in their eyes?

We have taken everything from them and given them nothing except an enervating prosperity, and the desire for the newest smartphone and the “ideal” game. You need a job (not a profession) to get money in your pocket so you can afford an ultimate entertainment highlight in your life. The Romans had bread and circuses; we have sex and circuses. What’s the difference?

The decision by the majority of students testifies for the complete failure of a living connection with Jesus Christ and his Church. Therefore something should be said about the two students who contradicted the majority, for they symbolize what is still healthy in us. Getting to the bottom of what impelled them to this contradiction means finding the answer to the nagging question of what inner and outward attitude must be revived, so that we can subsist.

The Slogan is: “I Give Up!” — The Delusions of Lack of Identity

Let us first note that none of the other students joined them in their opinion, even after they had justified their position. The majority chose the path of least resistance. The (anti-)ideal of the younger generation is capitulation. The motto is: What do I do when the Islamic State comes and demands something from me with force? I capitulate!

The two students who gave a contrary opinion and stayed with it, even though they were in a decided minority, are from families that are not like the average. They are devout — not just nominal — Catholic families. Both they and the other students no doubt felt this difference. Anyone who stands up for ideals in this age is regarded as anachronistic. Anyone who is devout nowadays is laughed at — can quickly become an outsider. The “healthy, rich and beautiful” people think religious faith is for the weak, the poor or others who are somehow deficient.

The questioning of the students, on the other hand, showed who meekly capitulated to the arrogance of the powerful and who stood their ground. That is how quickly the allegedly weak are shown to be the strong.

(Lucas Doninelli in Il Giornale: “There is a type of subject desired by all totalitarianisms. but only democracy, or what we call democracy, is capable — with our permission — of creating.”)

We are left with the shattering fact that this generation of our children is growing up as the cannon fodder of tomorrow. They are largely unprepared and incapable of surviving outside their consumer and pleasure bubble. This is a generation that is prepared to approve any capitulation unconditionally the minute any blowhard with a weapon in hand jumps off the TV or computer screen into real life. Worse still: This generation is being raised to mistrust anyone who does not confirm and bow to the dominant mainstream. It is being immunized against the healing powers which could change its fate, and perhaps that of whole peoples.

Decisive resistance comes from someone who is firmly founded in belief. But this very faith is often questioned, relativized and minimized, instead of being reinforced, even by representatives of the Church. Just think of the endless litanies of many clerics and lay functionaries who insist on the absurd contention that all religions are “good, peaceful and beneficial”. Or those who advocate — with emphasis on symbols — that “all religions are important and valuable”.

The Complicity of “Inter-Religious” Representatives of the Church

(“Many bishops, priests and people of religious orders wandering around the land have no idea what they are doing, because the teaching profession is too often shrouded in a thick fog created by the enemies of Christ and his Church — both inside and outside of the Church“ — from the traditional internet site, Messa in Latino.)

The responsibility for the devastating answer of the 23 students who would not hesitate to convert to Islam, because religion ultimately plays no role in preserving life in the world they have been presented, by no means falls primarily on the representatives of the Church. But they are complicit.

And finally, we should beseech Mary, Mother of God, succor of Christians, for her help, so that the younger generations may receive the faith and will — in time of danger and trial — call upon the name of Jesus, as the Coptic martyrs did when they were murdered by the Islamic State (IS) out of hatred for their faith.

86 thoughts on “Faced With ISIS, These Italian Students Would Convert to Islam”