Last Saturday there was an anti-Islam demonstration in Brussels that ventured into one of the most culturally enriched (and dangerous) neighborhoods in Europe, Molenbeek — the Islamic ghetto where most of the terror plots carried out in France and Belgium seem to be hatched. During the course of that demo, a car drove at speed through a police barrier and seriously injured a woman, and then later hit a motorcyclist. The mainstream media, led by The Daily Mail, blamed “far-right extremists” for the deed, saying that they had been driving the car.

Well. They had to walk that one back eventually, after the two men in the car were arrested. It took a while for the news to percolate through to the media, given the language barrier, but the two drivers — a different one for each hit-and-run — turned out to be culture-enrichers. The incident had a Mohammed Coefficient of 50%.

The Daily Mail was obliged to update its article on what happened, but the URL for the story remained the same. Here’s a screen cap including the URL — in the headline, “grinning far-right activist” has been replaced with “grinning driver”, but the URL tells the original story: 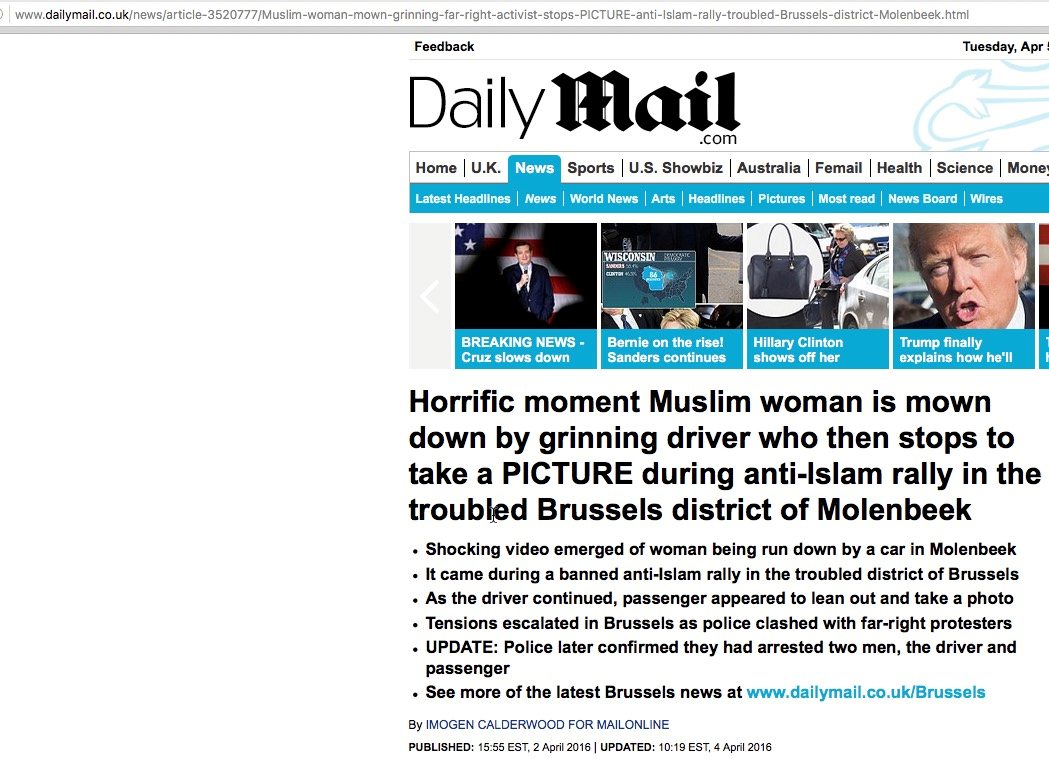 Below is a report on the court appearance of the two drivers, as told by La Libre Belgique. Many thanks to Ava Lon for the translation:

Two young drivers from Molenbeek who hit a female and a motorcyclist claim to not to be able to remember anything; they were driving under the influence of alcohol and drugs. The two occupants of the white Audi A1 who hit the local woman — at 4:38pm — in Molenbeek, and later a motorcyclist, were to answer to their charges in court in Brussels last Sunday. They remained in custody following the hearing. The female victim is now out of danger and was released from hospital during the night.

The two men, inhabitants of Molenbeek and aged around twenty years, were driving a vehicle rented by a friend — not only under the influence of alcohol but also drugs.

Represented by his defense lawyer Mrs. Nawal Bakkali, Redouane D. is the first driver, who tried to cross the police lines and ran over the female pedestrian who was crossing Fernand Brunfaut Street. He wasn’t caught as a result of the police pursuit; instead he turned himself in to the police on the same evening. He said he realized he was responsible for the accident while going home, but he couldn’t remember anything at all, while stinking of alcohol and slurring his words.

Represented by his defense lawyer, Mr. Thibault Colin, Mohamed B. is the driver number two who took the wheel after the incident, and was arrested right away at 5:04pm around Porte de Ninove, at least one kilometer from the be beginning of the chase. While still a passenger, he at first emptied the fire extinguisher through the window, and then immortalized their “exploits” with his smartphone. He was then arrested for hitting a motorcyclist and several parked cars (as it was the case during the first pursuit).

He equally pretended he had forgotten the episode and showed not the slightest remorse, all while being well-known to the police and the authorities, especially for his driving infractions.

When contacted, the two men’s lawyers refused to comment.

The Brussels Court, on the other hand, confirmed — through their spokesperson Denis Goeman — that the case will be going to trial, and that the young suspect arrested at the scene was placed in custody (this morning) just like the second suspect ( this afternoon).They are being charged with malicious obstruction of traffic, armed assault, and leaving the scene of an accident.

Two skinheads (out of seven) who were arrested as well while driving towards the marketplace in Molenbeek will be prosecuted by the court in Brussels, said the spokesperson from Brussels West, Johan Berckmans. They will be summoned directly to the Criminal Court in Brussels and tried in a accelerated procedure. They were clearly more than ready for riots, as they had with them — in the trunk of the car — all the tools necessary: pepper spray and leg holsters.