If the Syrian quoted in the following article is correct, roughly 10% of the “refugees” pouring into Europe are mujahideen for the Islamic State or other terrorist outfits. That would mean that 100,000 terrorists have arrived this year in Germany alone.

Many thanks to JLH for this translation from Schweiz am Sonntag:

“I Met Many Radical Islamists Along the Way”

A 23-year-old Syrian who has come to Switzerland estimates that every tenth refugee is an extremist. The business in fraudulent passports is flourishing — and the borders appear porous.

“We will conquer Rome,” is the blustering announcement of the adherents of the Islamic State (IS) which has turned up in video form on diverse networks. The alleged strategy is revealed: Thousands of jihadists should use the present stream of refugees to be funneled into Europe as asylum seekers.

One thing is established: Investigators found a Syrian passport — apparently forged — with one of the Paris suicide killers of November 13th. The authorities presume that he and at least one other perpetrator were able to reach Europe by the Balkan route. So the question is: How simple is it for potential terrorists to mix in with the asylum seekers?

The ID that was found was in the name of Ahmad al-Mohamed, who is supposedly 25 years old and comes from Syria. On the following day, the responsible ministry in Athens announced: “The holder of the passport found on October 3rd at the scene of the crime (in Paris) was registered on the island of Leros (as a refugee) in accordance with the regulations of the EU.”

Shortly thereafter. Serbian police announced that another man with an almost identical passport was being detained. Only the photo was different. Thereupon, news agency AFP announced that the genuine passport presumably belonged to a Syrian army soldier who had been killed fighting for President Bashar al-Assad. It is not yet clear whether the passport found Paris had been left behind accidentally or purposely by the perpetrators. 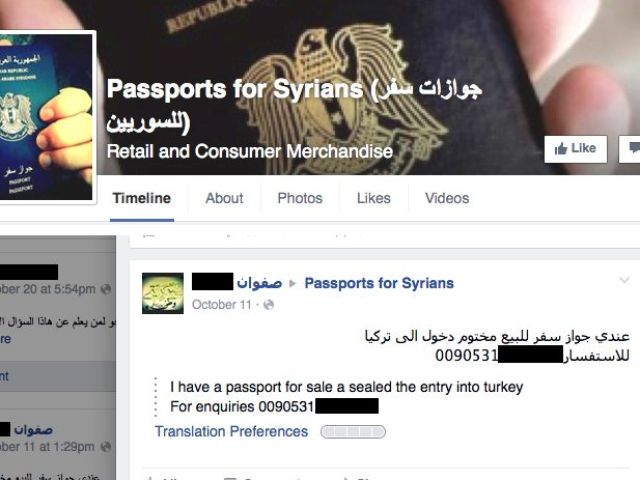 The independent journalist Simon Jacob knows how hassle-free it is to get a Syrian identity. On his walking trip in the Near East, he was in the southeast Turkish province Mardin. “I was offered a genuine Syrian passport for 2,000 US dollars,” he says. Anyone could have ID made. He was told: “Just bring us a passport photo of yourself and $2,000, and you will become a Syrian.”

Previously, the price was $1,000. Since it became known that the German chancellor was opening the way to central Europe to every Syrian refugee, demand had doubled. Business was booming along the Turkish-Syrian border: weapons sales, smuggling, shakedowns. “You can get an AK-47 for $500-600. Militias from Iraq and Syria also stock up here,” says Jacob. From dependable sources, he also knew that several businessmen from Syria have smuggled entire printing presses over the border with the necessary rough documents. So it was possible to produce genuine ID.

Francis Mamdouh, a 23-year-old Syrian, is certain that extremists using the refugee routes is no isolated incident. Mamdouh left his home province of Hama across the Turkish-Syrian border. First he got to Greece and used the usual route from the Balkans to Austria, arriving in St. Gallen, Switzerland after a three-month odyssey. He traveled part of the way perched with other refugees in a truck trailer. The rest was by difficult sea route and on foot.

You met many, said Mamdouh, who wanted to go to Europe for a variety of reasons: “Controls are not very tight. At the Turkish border, you got through mostly by paying. Anyone who could not pay enough — the Turkish military took their luggage and clothing Border authorities do not really inspect the travelers — it’s all about money. People who tried to run away because they didn’t want to pay, were shot down by Turkish soldiers.” There are many who use the chaos to turn a profit. “There are also other places and crossings to Europe where it is about financial transactions and not real inspection. Refugees excepted.”

Mamdouh says that he met a not inconsiderable number of potential extremists in these three months: “If I had to estimate based on my personal experience traveling, I would say that there is an Islamist in every ten refugees.” As a former police officer, he is familiar with such things. In the battle against terrorist organizations, he was stationed in Damascus, among other locations. He was captured in battle by the IS and held as a hostage for ten days, until a ransom was paid. Another time, he was so badly wounded by jihadist fighters that his torso was full of fragments. A visible scar on his neck testifies to this time.

Since the attacks in France, gruesome stories like this no longer seem so far-fetched. Shock has set in deep, and the West, which has been so coddled by security, must re-orient itself. What to do with the fear, grief and rage? Old debates are re-ignited. The answer at the political level is in a sharper tone. After countries like Poland and Slovakia announced as early as summer that they would accept only Christians from Syria, since the Paris attacks 34 governors in the United States have announced that they will not accept any more Syrian refugees. According to Francis Mamdouh, it is already too late: “Daesh has already reached Europe. I don’t know exactly what they have planned, and I don’t want to fuel any anxieties, but they are here. I met many of them of the on the way who are now in Germany.”

Since the outbreak of the Syrian civil war, the UN counts 4.6 million Syrians who have fled their homeland. 8 million are living in Syria as displaced persons. From last January to September, the EU has registered 700,000 new asylum seekers, of whom most want to go to Germany. From the beginning of September to the middle of October, 2015, according to the EU, the number of refugees entering Germany alone was 409,000. The stream does not stop. Greek authorities predict that the arrival of 3.7 million people from Turkey can be expected in the coming months.

A long-term solution to the growing problem is not in sight. Quite the contrary. The terror militia has reached such proportions that the political rift is growing evidence of a deep chasm riven into Western society. Diverse opinions about refugees, religious extremism and security measures are clashing more strongly. Mamdouh is apprehensive: “That is exactly what IS wanted. That we should mistrust the real refugees who are themselves fleeing these kinds of extremists. That free people begin to hate one another.”

Europe seems exhausted, and Turkey is proving to be a dubious partner in monitoring refugees. There is no universal formula for accepting masses of people who need protection and sifting out the dangerous extremists. The fact that the Paris terrorists included French and Belgian citizens raises other questions which extend far beyond the subject of refugees.

Who, really, is financing the arming of possible attackers? Who supports them? What groups are they picking to use as cannon fodder for their ideological madness?

It is in Germany that the phenomenon of the sect-like network of known Islamists exists — at the top are Pierre Vogel and Ibrahim Abou-Nagle — whose ideology hardly differs from that of IS and al-Nusra. Financially and ideologically supported by the Arabic Gulf States, they are active on the internet as proselytizing demagogues, they distribute “READ!” copies of the Koran on European streets or explicitly call in their lectures for despising the freedom-loving Western lifestyle.

Several hundred adherents have gone from the fog of these groups in Germany to jihad in Syria. Groups with similar attitudes and dubious connections are found in other European countries. And isn’t it the Gulf States who accept no refugees, but equip terrorists in Syria? — draw what conclusions you many from that. In Switzerland as well, there are connections to diverse extremists.

7 thoughts on “A Jihad Army Walking into Europe”