Our occasional guest-essayist Nick McAvelly turns his attention from the UK to undertake a formal logical analysis of the American media’s coverage of Islamic terrorism since 9/11.

Stars and Stripes
by Nick McAvelly

There have been multiple terrorist attacks on American soil since 9/11. Whenever an attack is carried out and the perpetrators are Muslims, the assertion is inevitably made in the traditional media that not all Muslims are terrorists. This is obviously true, but it is irrelevant. If an A proposition (All S are P) is false, it does not follow that the corresponding particular affirmative proposition (Some S are P) is false.

This logical principle can be illustrated using an everyday example. Obviously, the assertion that all cats are marmalade coloured (All S are P) is false. That doesn’t mean there aren’t any marmalade cats, or that there isn’t one living at Chartwell right now, in accordance with Winston Churchill’s wishes.[1] If someone visited Chartwell and responded upon seeing the cat in question by saying, ‘Not all cats are marmalade cats’, the only thing you could say to that would be: ‘What’s your point?’

The truth of the matter is, where the subject term is Muslims, that term is not distributed, and the predicate term is men who have committed acts of violence and terrorism, the I proposition (Some S are P) is true. The frequency with which that I proposition is shown to be true by so-called ‘radicalised’ individuals arising from within the Islamic community should be of concern to everyone in America. 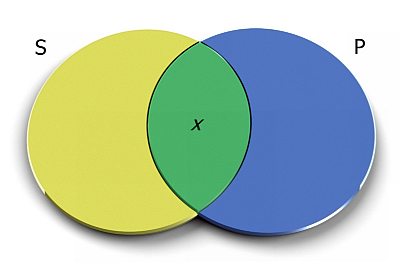 The I Proposition — Some S are P

In 2010, the Al Qaeda magazine Inspire instructed its readers that, in order to avoid being caught by American security measures, they should not attempt to execute a ‘spectacular’ event like 9/11, but instead, should carry out smaller scale attacks.[2] The magazine specifically recommended making an IED from a pressure cooker and running people down with a 4WD.[3]

Mohammed Reza Taheri-azar, a graduate of the University of North Carolina, had already thought of that. On March 3d 2006, he drove a rented SUV into a group of students at the university, hitting nine people and sending six of them to the hospital. Taheri-azar was reported as saying that he hated Americans and Jews, that he carried out his attack in order to punish the American government for how they treated Muslims, and that he intended to kill his targets. According to the local press, Taheri-azar claimed to have read the Koran 15 times, and a student who knew him when he attended UNC was reported as saying that he was deeply committed to Islam.[4]

On 1st June 2009, Abdulhakim Muhammad, a Memphis-born convert to Islam, drove past an Army recruiting station in Little Rock Arkansas and opened fire on two American soldiers with a semi-automatic rifle. Muhammad killed Private William Long and seriously injured Private Quinton Ezeagwula, two young men who had finished their basic training just two weeks earlier. When he was arrested, Muhammad had several firearms in his truck, so he had the means to carry out his attack, and he certainly had the opportunity to carry out a drive-by shooting on a soft target. Muhammad was jailed for life without parole in July 2011. Before he was sent down, Muhammad wrote to the judge and explained his motives. In that handwritten note, Muhammad stated that he was engaged in jihad, and his actions were justified by the doctrines of Islam.[5]

In September 2009, an American convert to Islam named Michael Finton, aka Talib Islam, pleaded guilty to attempting to use a weapon of mass destruction after he tried to blow up a courthouse in Illinois. Upon his conviction, he was described by the Assistant Attorney General as having been under the influence of a violent and radical ideology.[7]

Faisal Shazad was sentenced to life imprisonment for an attempted terrorist attack in Times Square in May 2010 after he pleaded guilty to ten charges, including conspiracy to use a weapon of mass destruction and the attempted use of a weapon of mass destruction. He explained his motives by saying that he was a Muslim who was defending his religion and if he was given power over a thousand lives, he would end them all for the sake of the Islamic deity Allah.[8]

In April 2011, Farooque Ahmed, an American of Pakistani origin, pleaded guilty to charges of attempting to provide material support to a designated terrorist organization and collecting information to assist in planning a terrorist attack on a transit facility. He was sentenced to 23 years imprisonment. Ahmed had carried out reconnaissance on Metrorail stations in Arlington, Virginia, home of the Arlington National Cemetery, the Pentagon Memorial, the Marine Corps War Memorial and the USAF Memorial, and had indicated to an undercover agent where bombs should be placed on Metrorail trains in order to kill the most people.[9]

In April 2013, Mohamed Mahmood Alessa and Carlos Almonte, two men from New Jersey, were sentenced to over twenty years in prison each for conspiring to join the terrorist group Al Shabaab. According to the New York Times, Alessa had talked to an undercover agent about taking part in jihad and beheading people on camera before his arrest at Kennedy International Airport.[10]

In the wake of the most recent terrorist attack in California, Donald Trump has suggested that as a short term measure, America should stop Muslims from entering the country until the authorities ‘figure out what the hell is going on’. In order to assess this proposal, it is important to understand that being a Muslim is a necessary condition of becoming a jihadist. This logical assertion is true because the foundational beliefs of Islam are shared by all Muslims, and the development of a jihadist’s belief system can only take place within an Islamic framework. No non-Muslim will ever become a jihadist. To put this another way, where the subject term is ‘Muslims’ and the predicate term is ‘jihadists’, the A proposition (All S are P) may very well be false, but where the subject term is ‘jihadists’ and the predicate term is ‘Muslims’, the A proposition is true. 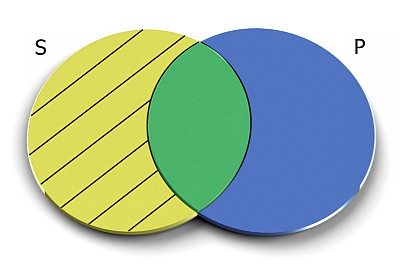 The A Proposition — All S are P

Such a policy would prevent some would-be immigrants from realising their personal dream, in that they would have to stay in their own country and live their own lives. In this regard they would be exactly the same as everyone else in the world who does not, and never will have, the opportunity to go and live in another country. I looked at the points system used by Australia to control immigration into its country not too long ago, and discovered that I was not eligible to emigrate to the land ‘down under’. So I’ll just stay where I am, and live my own life. Anyone who is unable to emigrate, whatever the reason, will just have to do the same. And that’s really not such a big deal, at the end of the day.

Playing devil’s advocate, it could be said that there are some genuine refugees from war-torn areas who would like to come and live in America. The correct response to that would be to point out that if America ever did take the proposed course of action as a short term measure, she would simply be following the lead of those Islamic states in the Middle East who have effectively closed their borders to such individuals.[11] In short, Trump is only proposing that America ought to do what those Islamic countries have already done.

Americans should remember that the state’s primary duty is to ensure the safety of its own citizens. That is the essential function of any state, and if the American state fails to carry out that aspect of its duties, then it is no longer a legitimate political entity. And the American state has failed to protect its own citizens, as we can see by the long list of terrorist attacks carried out in the name of Islam since September 11th 2001.

The fact that someone running for office would even make such a proposal is a clear indication that something is seriously wrong in America today. The current administration’s wishy-washy approach to this problem over the years has allowed the situation to deteriorate to such an extent, it can now be argued that the American state has failed in its essential purpose and is no longer a legitimate political entity. So never mind if people in other countries experience a transient emotion (a.k.a. ‘feel offended’); they’ll get over it. Never mind if people have to live in their own countries, because there is nothing too exceptional or troubling about that. That is the default position. What matters here, and what ought to be the primary concern for everyone, is that American citizens are being murdered in the street. This is real; this is happening. Innocent people are losing their lives, their potential, everything they could have been. That has all been taken away from them, and from us — by jihadists. And some people might not want to face the truth, but those jihadists were Muslims.

As someone who doesn’t live in America, I’m fairly indifferent to the practical aspects of Trump’s proposal, and I have no firm opinion as to whether it is right in principle. It’s not something that’s going to affect me directly, so I don’t care too much about it. What is interesting to me is not that Trump proposed limiting immigration, but that he said this would be a short term measure that would only last until the American authorities had ‘figured out’ the whole jihadist problem. And this is interesting because no one could say that Trump was wrong because the authorities in America obviously had ‘figured it out’!

It will soon be 2016. It’s over fourteen years since the terrorist attack on America on 9/11. And apparently, the American authorities still haven’t ‘figured out what the hell is going on’. That’s an absolute disgrace.

16 thoughts on “Stars and Stripes”