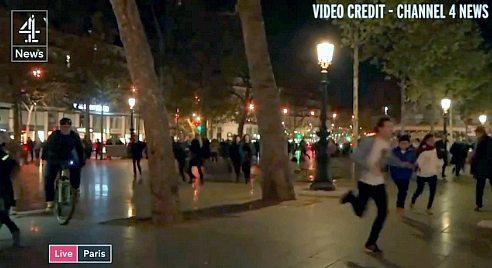 The following rant by Vlad Tepes reminded me of a poem entitled “Anthem for Doomed Youth”, written 98 years ago by Wilfred Owen during an earlier fit of mass European insanity:

What passing-bells for these who die as cattle?
Only the monstrous anger of the guns.
Only the stuttering rifles’ rapid rattle
Can patter out their hasty orisons.

First, watch this video. You may also want to go over to Vlad’s place and watch the rest of them.

Yes, mourners gathered at the Place de la République in Paris panicked like pilgrims at the Hajj. But to add bitter irony to the whole incident, the announcer was just about to tell his audience how unafraid Parisians are in the wake of Friday night’s massacre.

Such is the Media Narrative — to be preserved at all costs, even when it is manifestly absurd.

Below are excerpts from Vlad’s rant:

The cattleized West, and the first line of defense

1. The bovine-French, panic at mass mourning movement and show of sanctimony

(The most important thing you can do when people you don’t know are murdered by Muslims in an act designed to promote the primacy of Islam, is show your moral superiority to people who would like to take meaningful action, by demonstrating grief.

Not for the dead, but for the temporary damage to the illusion of multicultural socialist utopia. The French have shown they are bronze medal winners after the Soviet Union and the Communist Chinese in that. Just imagine if the whole population of France had not been utterly emasculated by socialism. This attack could have been stopped by a couple of armed men who actually believed in defending themselves. Instead, all they have is what we see today. People tripping over themselves in self sacrifice, trying to tell the people who want them dead or enslaved how there will be no “backlash” instead of at the very very least, going en masse to the mosques and screaming: “stop the hate”.

Instead, they will save that slogan for Marine Le Pen. The one politician who dares suggest that defending one’s rights, liberties and even your lives. And thanks to a world governed by socialist identity politics, it will only be even slightly tolerated coming from a woman. Cause if a man dared say these things he would have to live under 24 hour multiple guards and move locations every night, and that would be from the socialists every bit as much as from the Muslims.)

Here they are again, running from a noise while mourning…

[…]
Over the past couple of years we, Oz-Rita, Nash Montana, Gates of Vienna and a huge group of volunteers have translated and subtitled hundreds and over the time I have been involved, a few thousand videos. I have, as long time readers will know, lost a few channels well populated with important videos and much hard work. Sometimes for acceptable reasons like commercial copyright and I have little to no argument with that.

But other times for reasons which define the whole problem.

I have lost one channel and been banned from the service because we translated from French and Arabic an Islamic State video threatening and warning France about exactly what happened there on the 13th.

What we have is a culture that feels the way of dealing with an ideology of grotesque, horror, pornographic in its violence and sick with blood and suffering, is to ban and delete the warnings they issue to us while going to their beachheads and telling them that they should have no fear. That under no circumstances should they worry about a “backlash”. But for sure, if you want to maintain the illusion of a socialist multicultural utopia the first thing you really must do, is ban the people who translate and subtitles the videos the enemy makes which explains what they are going to do, and how, and even occasionally more or less when, and most importantly, (and I cannot stress this enough), why.

The various internet services and governments and so on do it for a variety of reasons. But mostly its to protect the illusion that the policies which have infected free and prosperous people since WW2 and destroyed our very immune system of the culture, like AIDS to the individual, are intact and effective at protecting the social body without anyone actually protecting the social body at all.
It takes a serious assault on reason before something as primitive and ineffective as Islam can come to our countries and wreak the kind of havoc that a healthy society would have laughed off as they would have beaten it before it could even demand that schools all serve halal or no one should draw Mohammed and be taken seriously by anyone.

The Jews, of course, will face the consequences disproportionately as they always do. Not because they are the canaries in the coal mines but because they are the first line of defense of preserving the illusion of a socialist state. Not that leftist Jews have played no role in creating and maintaining that illusion; the Jews have never been viewed as the ‘John Waynes’ of any society save a few short years when it was OK to view and portray Jews and Israelis as defenders of liberty when Moshe Dayan was leading the Israelis to victory against the same enemy we face today. The leftist Jewish people certainly have been part of this emasculation and move to socialism. But the price for that will be theirs to pay in spades. It already is.

Today, the media talks about people who suppress their anger and show moral outrage at those who want to actually do something about the problem the way they used to about genuine acts of bravery by people who fought an enemy bent on destroying us and our way of life. No submitting to, and protecting an enemy from the tiny fragment of your own population who want to do something is the new war hero.

Read the rest at Vlad Tepes.

65 thoughts on “What Passing-Bells for These Who Die as Cattle?”