In yesterday’s post about Björn Höcke’s speech, I quoted from a German contact who referred to a recent article from Politically Incorrect. Rembrandt Clancy has kindly translated the piece for Gates of Vienna. 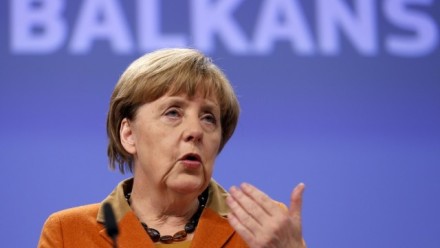 After Islamic Terror in Paris: Federal Government to Intensify the “Fight against the Right”

Federal Minister Thomas de Maizière, after a meeting with Chancellor Angela Merkel and other responsible ministers, spoke on the consequences of the terrorist attack on Paris:

Germany, too, is still strongly in the crosshairs of international terrorism … the Islamic threats to public safety will be monitored, but we will also monitor the right-wing extremists who might react to it. [The author, Alster, links to the German news portal, web.de, for his source (14 November 2015)]

Since 9/11, Berlin has been reacting in precisely the same way to every Islamic attack; thus policy makers have shifted in lockstep with the media ever further to the Left, and the sovereign people have perforce shifted to the Right. Now, everything which can not be assigned an established place on the Left is firmly located to the Right.

After every terrorist attack, Europe’s responsible citizens have hoped in vain for proportionate reactions, for a game changer, on the part of the responsible authorities toward anti-Western Islam. And this time? Far from it! This time, in addition to the “refugee crisis” forced by Merkel, there accrues mostly Muslim youths in excess of about 80 percent; and along with them, the fear of the established politicians, together with the ideologically conformist media [gleichgeschalteter Medien], of a strengthening of the “right-wing populists”. Thus the Interior Minister, Thomas de Maizière, expressly requests that no connection be made between Islamic terrorism and the mainly Islamic demanders for asylum: “Please, please, do not build an arch which links to the refugee debate.” What a pity, Mr Minister! The “arch” has long since been there, for two terrorist suspects arrived via Greece as refugees as AFP confirmed.[1]

Presently running like a golden thread through the collective mainstream press and the prattle of TV talk shows, not only does Islam have nothing to do with Islamic terror, (Mazyek[2] with Saudi Arabia once more at the forefront), now we must abandon all talk of the information provided by the intelligence service [Verfassungsschutz], that among the “refugees”, there are persons with an Islamic combat mission. Verboten!

What was that, that de Maizière said?

“…the Islamic threats to public safety will be monitored, but we will also monitor the right-wing extremists who might react to it.” [Here author provides a link to Zeit Online to document the information immediately below.]

And that is what is happening: the federal government is establishing 250 additional positions in the Federal Office for the Protection of the Constitution, 150 of which are for combatting right-wing extremism. Bild am Sonntag quoted an unnamed member of the Great Coalition: “It is absolutely necessary, that in the face of the danger of terrorism from Islamists and right-wing radicals, that we strengthen our secret service personnel”

The Islamic terrorism in Paris be design attacked essential constituents of our Western civilisation, which for many years have been in process of gradual and almost unnoticed removal from our daily lives; for example, music, sports, haram-restaurants and bars. It is intended that our Western way of life be gradually replaced by the “Islamic way of life”, which is what Islamic organisations call sharia in their written statements on principles. Politicians and media are unwilling or unable to treat this as a central theme and prefer to forbid criticism of it completely.

In the meantime, everywhere, “refugees” are showing their gratitude for being generously accepted into Europe. Here, in the cafeteria of an asylum accommodation in Sweden, they “ask” for better food. No one would take care of them, they think; and they shout, “thief, thief” (at 0:50 min). The video is an attempt to solicit sympathy and bring on still more of the welcoming culture.

1. AFP (L’Agence France-Presse): The original German article provides a link at this point to Junge Freiheit which in turn links to a report on the Yahoo! News portal which contains a reference to two suspects in the Paris attacks, one of them confirmed by the Greek Minister of Citizen Public Protection as the bearer of a Syrian passport registered on the Greek island of Leros in October. Junge Freiheit quotes the AFP report as follows:

The bearer of the passport, which was found at the crime scene (in Paris) on 3 October 2015 was registered on the island of Leros (as a refugee) pursuant to EU regulations, announced the Ministry of Public Order and Citizen Protection on Sunday evening. The man was registered with a group of about 60 people.

2. Aiman Mazyek, is the chairman of the Central Council of Muslims in Germany (Zentralrats der Muslime in Deutschland). Mazyek enjoys a great deal of prestige in German mainstream political circles and is known as a “Taqiyya-Meister” (Politically Incorrect).

29 thoughts on “The German Government’s Strategy After Paris: Target the Right”