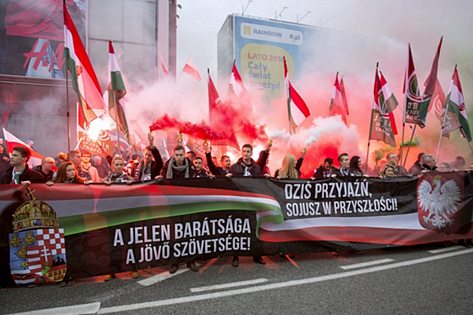 At the request of Vlad Tepes, our Polish correspondent Green Infidel summarized the highlights of a post from the Hungarian nationalist site Kuruc.info about the interaction between Poles and Hungarians at the recent Independence March in Warsaw:

Below are translations from the Polish.

The first photo says:‎ “Today friendship, an alliance in the future”. 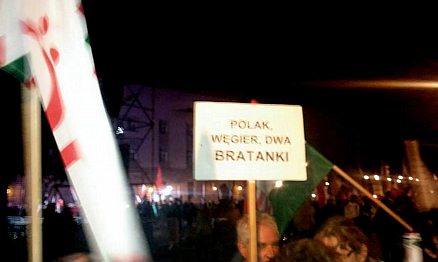 ‎The two countries have historically had a lot of links. Some anecdotes from my own experience — when I was once in a hostel in Munich, and some new people came into our dormitory room, they said they were Hungarians. When my friend and I said we were Polish, the Hungarians without hesitation said, “Let’s drink!” (Which may prove the second part of the saying.)

Also, in Budapest, after my girlfriend and I revealed that we were Polish, we were offered free entry to some places.

Historically, at the start of World War II, Hungary, in spite of being on the side of the Axis, refused to take part in the invasion of Poland (which greatly angered Hitler) and took in some Polish refugees. (Though none of this detracts from their appalling actions concerning the Jews.)