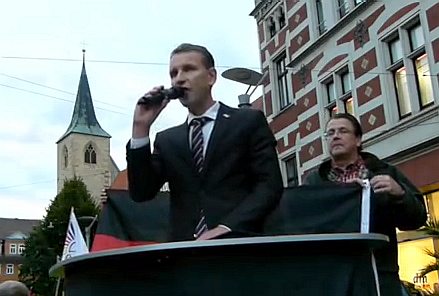 Germany is rapidly approaching a major historical cusp. The currently unfolding “refugee” crisis is greater than any the Germans have faced since May 1945. And, in a way, the present crisis is far worse, because it threatens the very existence of Germany as a nation and a people.

In 1945 the Germans were able to emerge from the smoking ruins to rebuild their country. In thirty or forty years there will only be Turks, Afghans, and Syrians squatting in the ruins, with no Germans around to rebuild anything. If present trends continue, Götterdämmerung will arrive in a generation or sooner.

In reference to the aftermath of the Paris massacre, a German contact recently sent us this note:

They will persecute us even more now.

Use google-translator on this article to see what I mean. We will have civil war within the next 2-3 months. The later, the more bloody it will be.

I hate to see any blood shed. But this time there is no other way out. Not at all. We warned for ten years this will happen and they did not listen.

If he’s right (and he’s a sane and sober fellow, not at all an alarmist), then it’s important for us to keep a chronicle of events for as long as we can, so that there can be some sort of record outside Germany of this dire moment in history.

The following speech given by Björn Höcke in Erfurt a couple of months ago is one of those important moments that cries out to be chronicled. The sound quality in the video is poor, so Rembrandt Clancy has kindly summarized it in English, with extensive translated quotes.

“A Betrayal of Our People”
Summary by Rembrandt Clancy

This demonstration took place in Erfurt on Wednesday 23 September against the asylum policy of both the state and federal governments. Die Welt estimated 5,000 participants, which may mean there were a great many more. The demonstrators marched through the city centre to the main plaza where they heard Björn Höcke speak.
He begins by giving examples of the displacement of Germans in favour of immigrants.

In Landshut, in Bavaria, a giant tent was dismantled after the end of a fair, because Asylum seekers were supposed to be billeted there.

In Saxony-Anhalt a barracks was vacated to manage the accommodation of 700 Asylum seekers. The soldiers moved into tents in the military training area.

In the eastern North Rhine-Westphalian city of Lübbecke, the headmistress of the Jahn Secondary School received a call. At 17:30 she learned that her school was to be vacated the next day. In period 5, the students were informed that they must leave the school at once. I quote the headmistress, who in tears said these words which I now impart to you: “My students too are people. One cannot treat them in such a way. They were given 15 minutes to clear their things from the classrooms. Then they had to get out. It was flight, like after the war!”

“It is our citizens’ duty to reconquer this constitutional state for our people, dear friends,” said Mr. Höcke.

We are going to show these crazed pseudo-elites the red card! And we profess today that there is no blanket welcoming-drunkenness; there is a refusal of the asylum madness in this country, which is at least just as strong and it is well-founded.

The former Czech President Václav Klaus characterised Merkel’s welcoming policy as “naive”, “irresponsible” and “suicidal”. Merkel and her kindergarten cabinet are destroying our country! She must go, dear friends!”

This last statement occasions Mr. Höcke to mention the proximate aim of his party, the AfD (Alternative für Deutschland):

We need new elections. And I say to you: It will be a hot autumn. And it will be a cold winter. And I predict for the next year that there will be new elections in the Federal Republic of Germany!

Next Mr. Höcke deals with the press:

Let us take a look at the media, which we have always with us. Standing shoulder to shoulder with the old parties, they are to keep political competition at a minimum — you know that. The first method is silence. The second method is falsification. And the third method is stigmatisation. With respect to silence, the Thüringer Allgemeine is absolutely top class, dear friends! On 24 August of this year, when I made the only opposition speech in the Thuringian Landtag and clearly highlighted the phraseology of integration of the old-parties, exactly nil appeared the next day’s edition of the Thüringer Allgemeinen Zeitung. The AfD was not mentioned in one single sentence.

“They are also practised in falsification”, said Mr. Höcke of the newspaper. In the demonstration of the previous week the Thüringer Allgemeine reported on the Internet that “More people were present at the counter-demonstration than at the AfD demonstration.” Mr. Höcke adds, “I cracked myself up for laughing, dear friends!” He reports that the police conservatively estimated 1,200 AfD participants and 100 or 200 counter-demonstrators.

It is disgraceful in a free country, for journalists not to rise above such failures. This has nothing to do with free and critical reporting. That is DDR-level, dear friends.

Mr. Höcke came to the final step, stigmatisation, which is also very much favoured.

He points out how this left-fascistic press is supported by tax money. However, he praises the Thüringische Landeszeitung for their factual reports on the demonstrations.

The Germans will not give up their land and their identity. They will not allow themselves to be eliminated after a thousand years of existence. Then Mr. Höcke turns to Erfurt in particular. The destruction of cities has to a considerable extent captured a large part of our collective memory. But Erfurt was largely spared the bombing of the Second World War. Mr. Höcke introduces a symbol of spiritual centeredness, which takes the form of the city of Erfurt itself. He sees a city which is in unity. In the very middle of it is the cathedral, which shows that man does not live by bread alone, nor does he live only for bread. It is surrounded by the proud houses of the citizens. It is a community of responsibility and harmony which has taken centuries to grow. Erfurt is beautiful and German, and is to remain beautiful and German.

Mr. Höcke says the NDR broadcaster had engaged a psychoanalyst by the name of Hans Joachim Maaz. He does not know how much of the TV licence revenue was used to pay for this psychoanalyst’s diagnosis. According to Maaz, the peoples’ unconscious drives them out onto the street. And their unconscious in turn is dominated by problems of the post-reunification period.

Mr. Höcke mentions the contagious diseases that are being brought into the country:

Now we swing around once more to the illness of those applying for asylum. In the Social Committee in Jena, a representative of the local health department gave a report. She said: “Diseases which are not preventable are again on the march. And the Germans have — on account of the supposed eradication of measles, mumps and German measles — a vaccination status which gives cause for concern. The population is no longer protected. Epidemics such as tuberculosis, typhus, HIV are again on the march.” So declares the lady in office.

In Dusseldorf the suspicion of highly dangerous and highly contagious active tuberculosis in an asylum applicant has been confirmed.

He invites the federal Vice-Chancellor, Sigmar Gabriel, to come to Erfurt and speak with him.

And I call upon you, Herr Gabriel. Be a match for me! Come to Erfurt and see me, Mr. Traitor of the People…

…and dear colleague, Hennig-Wellsow [chairman of the Thuringian party, die Linke, the Left Party], . . . I can assure you and the other traitors of the people, of the Greens and of the Dark Reds and of the Reds, and what else there is, also the Blacks [Anarchists], that this country finds itself on its way down into the abyss.

‘to be an immigration society means that not only people who come to us must integrate, but also the people who are already in the country’. The Germans are supposed to integrate in their own country; but that is absurd, dear friends!

And the Germans were never asked if they want to integrate. He demands a referendum.

50% of the Afghanis are illiterate. Who is supposed to teach them the German language? Who is supposed to educate them? Who is going to employ them? The ifo-Institute in Munich considers it is unrealistic to employ any appreciable number, and not at all for a minimum wage of €8.50 per hour.

The ifo-Institute advocates abolishing the minimum wage, and Höcke says that is the plan.

So, the minimum wage is supposed to be abolished, says the ifo-Institute. . . . We have in reality 5 million unemployed, 5 million unemployed. And we are now bringing millions of illiterates and unskilled people into the country, dear friends, in order to employ them as scabs. That is a catastrophe. That is the end of the welfare state, of the social peace in this land. That is in fact a betrayal of our people.

“I say it once more”, Mr. Höcke continues with emphasis, “ We need no integration of refugees”:

For those who are living among us permanently, the pressure to assimilate must be increased. And for that two things are necessary dear Thuringians; first, for that we require, love of self. Only when we are finally ourselves once again, only when we learn to love our country will we be attractive to foreigners and then they will also want to be Germans. And secondly, we need a radical limitation on immigration.

Then Mr. Höcke puts forth what amounts to a sociological law when it comes to assimilation, which he distinguishes from integration. (Integration is a “mutual process” which “produces something new” and “the Germans were never asked if they wish to integrate”.) In the case of assimilation, it is the collective which decides whether it works. The speaker offers an example. The relatively few Turkish children in Erfurt speak the Erfurt dialect. But the few German children in Berlin, they speak Kanak-Sprak [this is an informal designation for a sub-cultural jargon made up of two languages. In this case, after two or three generations, the Turks in Berlin speak a hybrid of German and Turkish. Currently the German minority in Berlin are speaking this hybrid]. Thus the collective determines the level of assimilation.

In closing, Mr. Höcke calls for the demonstrators to free themselves from this life-destroying “hypermoralism”. He says that the German people are not morally obliged to dismantle everything they and their forefathers have built up, and to do so even to the point of self-destruction. They are not obliged to sacrifice their collective substance and political culture to the hopes of immigrants. And they are not obliged to become a minority in their own country and relinquish their self-determination to an immigrant majority.

In conclusion, dear Thuringians and dear guest from other federal states, an urgent request of you. Free yourselves, let us free ourselves from the claws this anti-life hypermoralism. We, we, the German people, are not morally obliged to sacrifice the constructive accomplishments of a lifetime, and those of our forefathers, to the point of the self-destruction of our collective substance and its political culture, to the hopes of immigrants. …

For more on Björn Höcke and AfD, see “Asylum Catastrophe”.