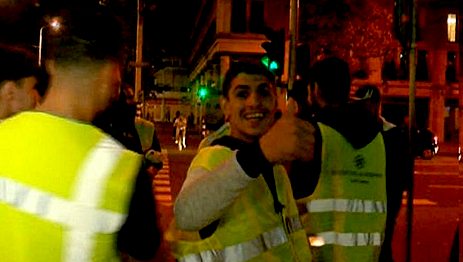 Sharia Police in The Hague
by H. Numan

Yesterday I wrote that little article about the riots in The Hague. My assessment of the situation was proven by GeenStijl, twice no less. First of all, AFA was there to create trouble.

Second, “the inhabitants are furious about the riots and doing something” was exactly what I expected: sharia police vigilante squads operate with official police and government approval. (Omroep West and Geenstijl)

In France we see banlieues where the authorities de facto have given up their authority. Same for England, in many cities they have sharia zones, where no one is welcome, apart from Muslims. We will very soon see this in Holland, with The Hague being the first city with a Muslim enclave in it.

Nice to be right, though I’d rather be wrong.

Something else that bothers me:

Did you know that The Netherlands could have financed a permanent base on the moon or a return trip to Mars with the money spend on useless wasted projects in the past twenty years?

I noticed it this morning, reading the news about Greece. We are expected (and prepared!!) to cough up even more money to be dumped into that black pit.

I’m doing this from memory, so the actual figures may vary a lot:

Total: 122 billion wasted in the last twenty years. More than enough to set up a permanent base on the Moon or buy a round trip to Mars.

3 thoughts on “Sharia Police in The Hague”