Our Dutch correspondent H. Numan, who lives in Bangkok, has been watching the “long hot summer” in Netherlands from afar. He sends this report summarizing the ongoing riots in The Hague. 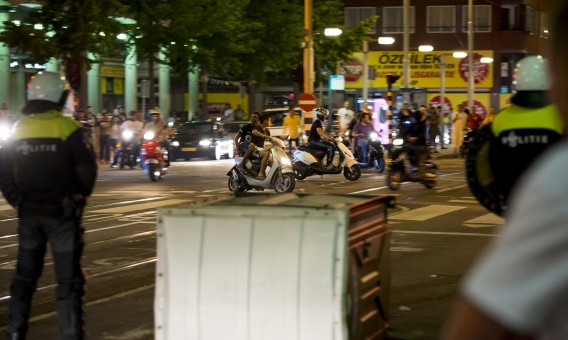 Maybe you heard about it: at this moment the weather is exceptionally hot in The Hague. Temperature-wise it’s about 37 degrees (that’s close to 100 F). Politically it’s even hotter. There are race riots going on in the Schilderswijk, a very poor area. Also known as the shariah triangle — I don’t have to explain why.

The reason is that the police tried to arrest an Antilles man who died in the attempt. He was taken in a neck hold, but choked to death. AFA (“anti-fascist”) socialists use every opportunity to create riots, and they teamed up with radical Mohammedans living in the area. For several nights the riot police have had great difficulty maintaining a semblance of law and order. There is widespread (or so I hear) looting and arson.

Up-to-date news is scarce for me. All I hear is after the events have taken place. The media are not quite open about this — I think — real problem.

About the Antillean man: His name is Mitch Henriquez. He weights over 100 kg (220 lbs). He shouted to the police he was armed. He then resisted arrest, so that five policemen were necessary to subdue him. This took place at a festival in het Zuiderpark (a large popular park). This is what I picked up from the media and Facebook.

The Antilles are part of The Netherlands (we tried to force them to be independent, but they massively resist any attempt to do that), and the religion is predominantly Roman Catholic (72%).

Ask yourself: why would Muslims run amok on behalf of an infidel?

That’s why I feel that this riot is instigated and orchestrated. By extreme left wing activists, AFA. And of course by jihadists who use any opportunity.

AFA wants to divert attention from Scheveningen, in which one of their squatted buildings will be cleared by the police in a couple of days. If there is enough manpower available — and currently there isn’t. That’s not really a coincidence.

I think you are familiar enough with AFA, I see them as extremely dangerous. They rarely act alone, they normally work through others. Like now.

Of course this hasn’t anything to do with Mohammedanism at all, and everything with showing how strong they actually are and testing the waters. The mayor of The Hague, Jozias van Aartsen, is not a strong personality. He does what he can to play everything down, and forgive and forget. He was described as performing as a perfect wet towel on TV.

I myself am from The Hague, born and bred there. I know the area of the Schilderswijk very well. Twenty years in the past, that is. Things will likely be somewhat different now.

I expect this will be the first official no-go area in a couple of weeks. The area has the highest number of Muslims and is sort of shaped like a triangle. Hence the name shariah triangle. The Al Soeni mosque is there.

The authorities never had much authority there. I expect them to let go of it completely (like in France) in a couple of weeks when the riots have calmed down a bit.