Those signs at the Naval reserve center and the armed forces recruitment station are the greatest outrage of the Chattanooga jihad story. Or rather, they should be, but — given the universal government and media devotion to “gun-free zones” — they won’t receive enough attention to dial up public opinion to the point of outrage.

The clearest photo of one of the signs was from the location where the Marines were killed: 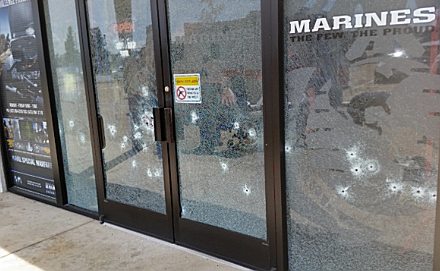 Despite the distortion caused by the fracture lines in the bullet-riddled glass, the image is of high enough resolution that the text is quite readable: 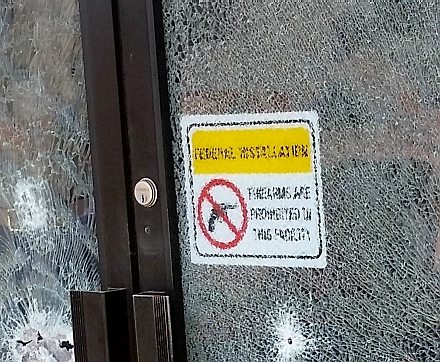 The photos from the recruiting station are not as clear, but the “firearms prohibited” sign is visible and obvious: 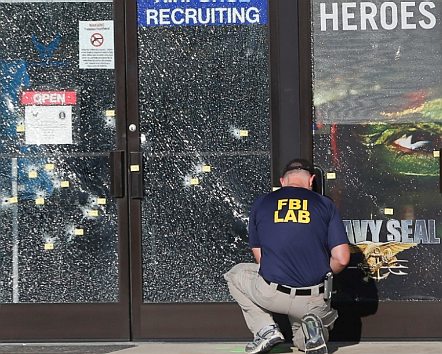 The two questions that military leaders and federal government officials should be asking themselves are:

How many lives have been saved by our federal gun-free zones policy?

How many lives have been lost due to the same policy?

But those questions will never be asked, much less answered. The Powers That Be are totally committed to the “narrative” about gun control, and no evidence will change their minds. That’s their story, and they’re sticking to it. The Marine corpses may pile up as high as the Iwo Jima Memorial, but those Marines will never be allowed the same Second Amendment rights that their civilian neighbors enjoy. And nobody else on those federal premises will be allowed to pack heat to protect the facility from armed attackers.

Imagine for a moment that your name is Muhammad Youssef Abdulazeez. You’re a good Muslim, from a normal Muslim family, a poster boy for the successful weaving of Muslims into the great rainbow fabric of American multicultural diversity.

And then you happen to read some extremist literature in the bookstore down at the local mosque. After that you get radicalized further on the Internet. Then, during a vacation trip to a holiday resort in Yemen, you happen to run into a radical imam who turns you into a full-blown extremist.

After you get back to Tennessee, you decide it’s time to commit some workplace violence. But to do the job properly, you need some heavy-duty weaponry, and you can’t get what you need legally. But that’s no problem — you talk to a couple of big-bearded guys you met at the mosque, and they put you in touch with a shady gun dealer, the kind who doesn’t worry about federal laws or background checks. Before you can say “Osama bin Laden”, you’ve got the arsenal you need.

Now it’s down to the Army recruiting center to ventilate a few of those uniformed boys. You pull up in front of the place, raise the AK-47… and see a sign on the door that reads: Federal Installation — Firearms are prohibited in this facility.

You throw the AK into the backseat and burn rubber getting out of there. It’s a bitter disappointment — but someday, somewhere, you’ll find a place where guns are allowed. That’s when you’ll spray bullets at a roomful helpless kuffar to your heart’s content. Yessiree!

Yep, that’s the way it would happen.

What other outcome is possible?