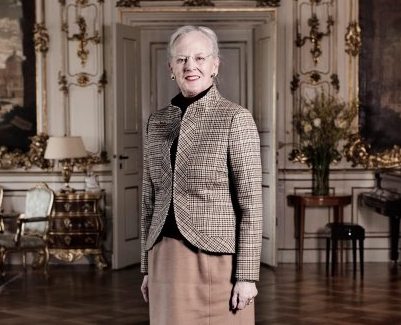 Ten years ago, during the very early days of this blog, Dymphna posted several times about a book written by Queen Margrethe of Denmark. The queen’s opinions on immigration and Islam were forthright, refreshing, and politically incorrect.

Those early pieces on Denmark were the beginning of our interest in the Islamization of Europe. There’s been a lot of water under the bridge since then, but Queen Margrethe is still forthright, still refreshing, and still politically incorrect.

Many thanks to Liberty DK for translating this interview from Berlingske:

The Queen says about immigrants: “We must be welcoming, but we must also let them know what we expect”

Queen Margrethe urges Danes not to let themselves be cowed by the kind of terror that has not only hit Denmark but also a number of other European countries.

During the weekend of the 14th-15th February, when the gang member Omar El-Hussein killed Finn Nørgaard and Dan Uzan and wounded several police officers before he was shot, it was an assault on both freedom of expression and the Jewish community.

In the interview with Berlingske on the occasion of her 75th birthday on 16 April, Queen Margrethe does not hide the fact that the assassinations confronted Danes with a new reality, and that it raises the question of how free and open societies need to respond to terrorists who want to destroy them. According to the Queen, Denmark was put under pressure by the assassination.

“It would be absurd to say that we are not under pressure. There is pressure, but what is important is how we tackle it,” said the Queen.

The Danish ‘reaction was what the ruler had thought and expected.

“It came as no surprise to me that people took it calmly. That much I know about my fellow citizens. I have confidence in how they tackle events, especially when it’s the really big things. We can get excited about small things; they do not matter so much. What is important is that we keep a cool head when the big things happen,” she says.

Seen through the queen’s eyes, an important part of our response to terror is to stand firm regarding the core freedoms upon which Denmark is founded — including freedom of expression — which makes it possible to speak, write and express our opinions freely.

“I know there are some who say that we must be careful, and of course we need to think about that, but we must certainly also say things the way we think they are. We must not keep it inside or hold back. If you hold things back, they become worse,” said the Queen.

Fear should never be allowed to dominate, even though the terrorists are prepared to use violence.

“First and foremost they have to know that we are not afraid. They want to scare us, but we must not be intimidated. This is essential. The old expression that we should not let ourselves be cowed or let ourselves be scared, is important and I think it is in the spirit of the Danes not to let themselves be suppressed or cowed,” says the Queen.

The Queen has updated her earlier opinion

That Denmark is confronted with a new reality where terrorist groups have the nation high on their list of targets for terror, is a fact.

The Queen has also observed how individual groups with foreign background turn their backs on Danish society.

This development has caused the Queen to change some of her earlier opinions.

Throughout the years, she has urged everyone to take good care of refugees and immigrants, and she has several times even chastised the Danish people. Today she still believes that everybody has a duty to welcome the people who come to Denmark, but in this there is now a new nuance to her message.

“Yes, we must still be welcoming but we also need to let them know what we expect, because it is our society they arrive in. We must make room for them, but they need to understand what part of the world they have arrived in. One country is not the same as another country in this world. We are an ancient society that likes to take care of the people who need taking care of, but we also want them to understand where they have arrived. That, I think, is very important.”

Shocked over harassment against Jews

The Queen stresses that there are rules that must be observed.

“We want to make room, but they have come to our society, and therefore they cannot expect that their old model of society can be continued in this country. They should be able to attend mosques when they wish — of course they do — but when they start doing things that are inconsistent with the larger pattern of Danish society, they have to realize that that is not acceptable,” said the Queen.

The terrorist assassination has exposed the existence of a fierce anger against Israel and Jews amongst groups of refugees and immigrants in Denmark.

For the Queen, it has been painful to follow the harassment and persecution of the Danish Jews, and she is shocked that yet again, Jews have become — in a completely unacceptable manner — a persecuted people.

“That the Jews today should suddenly find themselves so disliked, pressured and threatened, is shocking — because they ARE threatened. They wear it with great dignity, as they have always done, but it is shocking to witness.”

13 thoughts on ““There Are Rules That Must Be Observed””