Below is the third article in a series by Nick McAvelly using formal logic to critique the words of British Prime Minister David Cameron (previously: The Cameron Creature and Cameron Must Go!). It was originally posted at Patriot’s Corner in a slightly different form. 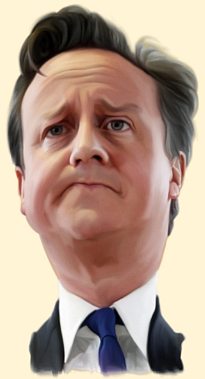 “If you don’t like me, I won’t be here forever.” — David Cameron
(image © Stavros Damos | Dreamstime.com)

At a speech he performed in front of a Christian audience in 2011, David Cameron acknowledged that he is not a religious scholar, and stated clearly that he does not claim to be an authority when it comes to matters of religion. Addressing a Muslim audience three years later, Mr. Cameron again said that he was not a religious scholar, and made it clear to everyone in Britain that despite having had the finest higher education that money can buy before he began his political career, and having had plenty time to study the subject since, when it comes to Islamic doctrines and practices, he really doesn’t know what he’s talking about.

Mr. Cameron’s ignorance did not prevent him from making a significant official pronouncement to the British people following the brutal slaying of an unarmed British soldier by two jihadists, men who had adopted the Islamic names Mujahid Abu Hamza and Ismael Ibn Abdullah, and who openly acknowledged that they had betrayed Great Britain and committed murder on behalf of the ummah, the international Muslim community. The murderer Abu Hamza stated that they were following commands found in surah at-taubah (the ninth surah of the Koran but one of the last to be written) when he and his accomplice stalked an unarmed soldier before murdering him in the streets of our nation’s capital. As we all know, it is usual to accept the confession of a murderer. Nevertheless, despite his own ignorance of the subject, David Cameron stood before the television cameras after Lee Rigby was murdered and stated that there were no Islamic doctrines which justified such violent acts. In logical terms, this is a universal negative proposition (also known as an E proposition).

Mr. Cameron provided the reasoning behind his assertion at an Eid reception on 8th October 2014, saying that he had met a woman at a Conservative party conference who happened to be a Muslim. This woman, who owned two restaurants, reminded him of all the hard working people in the UK who also happened to be Muslims. Therefore, according to Mr. Cameron, Islam is a religion of peace.

Mr. Cameron has employed three terms here (‘Islam’, ‘that which is peaceful’ and ‘Muslims’ behaviour’) but he has only used two premises. Laid out formally, Mr. Cameron’s argument is:

Obviously, the conclusion does not follow. Mr. Cameron has presented an enthymemetic argument, which means that it contains an unspoken premise. Remember, Mr. Cameron has admitted he is no expert on Islamic doctrines, so we know that he does not have the knowledge needed to formulate a doctrinal argument. Instead, he must provide an evidential argument to support his position. This means that he must link Muslims’ behaviour and Islamic doctrines. In logical terms, the unspoken premise must link the middle and minor terms of his argument in a particular way. (I have explained this logical point in my essay The Cameron Analysis.) So Mr. Cameron’s argument ends up being: 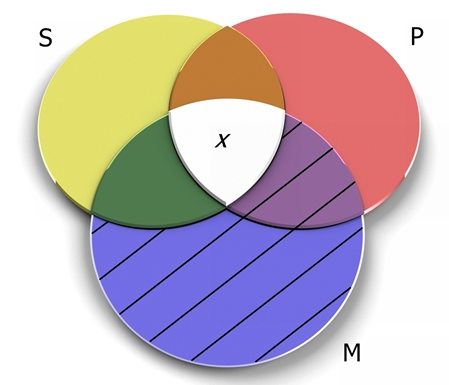 The Venn diagram represents Mr. Cameron’s two premises accurately but the conclusion (All S are P) is not shown, so the argument is not valid. Mr. Cameron has failed to support the conclusion he wants the British public to accept: All Islamic doctrines are peaceful.

However, the same Venn diagram can be used to represent a valid argument with the form IAI-3, also known as Disamis. That is to say, the two premises of Mr. Cameron’s argument may not support the conclusion he wants us to accept, but they do support a different conclusion — the I proposition ‘Some Islamic doctrines are peaceful’. We can see this is so because there is an x in the white region of the Venn diagram, indicating that one or more members of the class of things represented by the minor term — ‘Islamic doctrines’ — are also members of the class of things which are peaceful. So we know that the argument is valid.

So what? I hear you ask. Hasn’t Nick gone over all this before? We know this already.

Well, this is only the beginning of an interesting chain of reasoning. Here is the next step:

If we think rationally about what we see all around us in the world today, we soon discover that it is possible to construct a second argument beginning with the O proposition: ‘Some Muslims’ behaviour is not peaceful’. Anyone whose understanding of the world is grounded in reality will have no problem with that assertion. Employing David Cameron’s second premise once more, we have the A proposition: ‘All Muslims’ behaviour is attributable to Islamic doctrines’. The O proposition ‘Some Islamic doctrines are not peaceful’ follows from those two premises, as surely as night follows day. So we have:

Here is a Venn diagram representing this syllogism, which has the form OAO-3, also known as Bokardo: 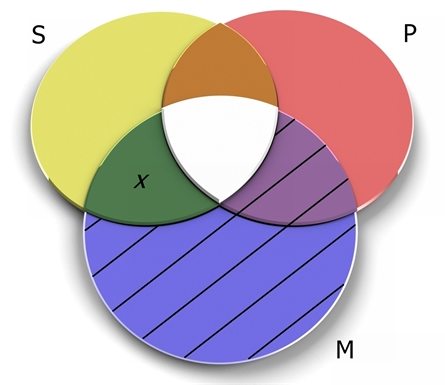 What we end up with, if we take the time to look closely at the Prime Minister’s reasoning on Islam and the Islamic State, is an understanding of the world that differs significantly from the one he wants us to believe in. David Cameron is the person who is employed, on our behalf, to do something about the ever-increasing threat of battle-hardened jihadists returning to our shores from the Middle East. And if Mr. Cameron doesn’t understand the motives of our enemies, then he will be unable to defend us effectively against them. It is therefore highly likely that British lives will be lost in the near future because of Mr. Cameron’s failure to develop a correct understanding of what our enemies believe in and what they are really fighting for. This is a matter of some importance, given the ‘severe’ level of the threat, and we should be drawing attention to Mr. Cameron’s failure at every opportunity.

Mr. Cameron’s statements amounts to a denial on his part that murderers like Mujahid Abu Hamza and the killers in the Islamic State are acting for the reasons they say they are. This is very strange indeed, for in Great Britain it is usual for a murderer’s confession to be regarded as important, both by the police and in a court of law. Does David Cameron now believe that this should no longer be the case? Should a murder’s explanation of his motives be disregarded by the police in future? No? It is right and proper to use a murderer’s confession to condemn him? Then why are Mujahid Abu Hamza and Ismail Ibn Abdullah treated differently? Why are their motives said to be a mystery, when the murderers have clearly explained what their motives were?

It was David Cameron’s duty to explain exactly why a British soldier had been brutally murdered on the streets of London. Instead, he chose to stand in front of No. 10 and utter a load of incoherent nonsense. Following that performance, every rational person in the country understood that Mr. Cameron has no intellectual integrity and no sense of personal honour. To stand before the British public and betray the memory of a dead soldier by lying about why he died is a truly despicable act.

This is important, because if some Islamic doctrines are peaceful and some Islamic doctrines are not, that leaves the door open for someone like Mujahid Abu Hamza to state, live and on camera, that he murdered a British soldier on the streets of the nation’s capital because he was following specific Islamic teachings which he found in surah at-taubah, and for that to be the truth.

If career politicians like David Cameron cannot understand that, or worse, they understand it but cannot face up to it, then they need to go. As British citizens, we can make a start to this process by ensuring that the politician currently employed as Prime Minister receives his P45 from the British public in May of 2015. And we need to make it known to every other candidate just why he is being voted out.

Read ‘The Cameron Analysis’ on Kindle