The following essay by Nick McAvelly is a follow-up to a November piece on David Cameron. It was originally published in a slightly different form at Patriot’s Corner. 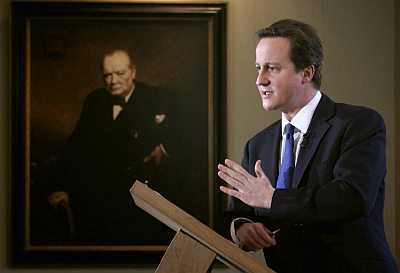 Cameron Must Go!
by Nick McAvelly

David Cameron is a politician, so naturally, no one believes a word he says. That is the default position for the majority of British citizens, and what’s more, that distrust is justified. Cameron does not deserve to represent anyone in any capacity whatsoever, let alone be the prime minister of Great Britain. One of Cameron’s most obvious failures is his inability to understand the threat of Islam to the United Kingdom. Cameron is not alone in this, but there is an election coming up in May, so the least we can do is make Cameron pay. Here is what he’s said on the subject:

“I’m not a scholar of any religion but […] these people in Iraq and Syria doing these appalling things, they have nothing to do with the great religion of Islam, a religion of peace, a religion that inspires daily acts of kindness and generosity.” — David Cameron, 8th October 2014.

“They are killing and slaughtering thousands of people, Muslims, Christians, minorities across Iraq and Syria. They boast of their brutality. They claim to do this in the name of Islam. That is nonsense. Islam is a religion of peace. They are not Muslims.” — David Cameron, 14th September 2014.

Cameron wants the British public to believe that Islam is a religion of peace and that the Muslims of the Islamic State are not Muslims. Cameron has said that he is not a religious scholar, and that he claims no authority whatsoever when it comes to discussing religious matters. Very well then. If Cameron wants the British public to accept what he says about Islam and the Islamic State, then his only option is to present the voters with an evidential argument.

On 8th October 2014, Cameron tried to do just that. He said that he had met a fellow Tory at the party conference who happened to be a Muslim, and he liked the cut of her jib. This apparently led him to believe that Islam is a religion of peace. If anyone looks at this logically, it is easy to see that Cameron’s argument is a catastrophic failure. Let us grant that it is true that some Muslims’ behaviour is peaceful. It simply does not follow that all Islamic doctrines are peaceful. We can see here that Cameron has used three terms, but only two premises. If we express this logically, we have:

Taking Cameron’s conclusion to be the universal affirmative proposition ‘All S are P’ we can see that the minor term of the syllogism he tried and failed to construct is ‘Islamic doctrines’ and the major term is ‘that which is peaceful’. The middle term is therefore ‘Muslims’ behaviour’.

For Cameron’s enthymemetic argument to make sense, he needs a second premise, and it must connect his middle term and his minor term in a particular way. It is a syllogistic rule that the middle term must be distributed (which means something is said about all the members of that class) in at least one of the premises. Since the middle term in Cameron’s argument is not distributed in the first premise (it is an I proposition), we can avoid a fallacy on Cameron’s behalf by making the second premise of the argument an A proposition. Cameron’s argument can therefore be laid out as follows:

It is possible to examine the underlying form of this argument in order to test whether it is valid. Where the minor term is ‘Islamic doctrines’, the major term is ‘peaceful’ and the middle term is ‘Muslims’ behaviour’, the form of Cameron’s syllogism is as follows: 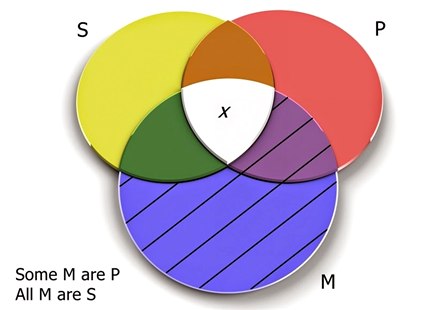 The second premise of Cameron’s argument is an A proposition (All M are S) which is shown in this Venn diagram by the part of M that is not S being lined (showing that it is empty.) The first premise is an I proposition (Some M are P) which is shown by the variable x in the part of M that is not empty and which is part of P. The conclusion of Cameron’s argument (All S are P) is not represented by this Venn diagram. This means that that the argument is invalid — the conclusion does not follow from the premises.

This is important, not just because David Cameron has made a significant logical error here, but because so many other politicians make the very same error. They point to one or two ‘peaceful’ Muslims and declare that Islam is a religion of peace. This is obviously one of the worst arguments in the history of human thought, and we all need to start saying that, loudly and repeatedly. And we need to hold David Cameron accountable for his failures, and vote him out of office in May 2015.