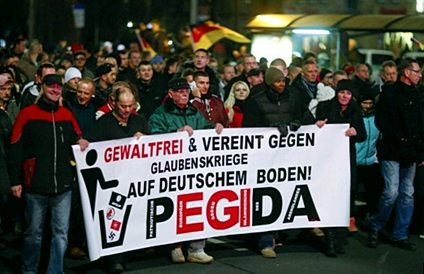 As a number of commentators have recently pointed out, the political oligarchs and media mandarins in Europe are very worried about the meteoric rise of PEGIDA* in Germany, and are doing everything they can to help squelch it. If you check the headlines on Google News, you’ll note that the MSM coverage of tonight’s PEGIDA-related rallies is focused more on the anti-PEGIDA counter-demonstrators than on PEGIDA itself.

An estimated 18,000 people attended the demonstration in Dresden tonight. This UPI story is typical of the coverage, but this Bloomberg article is more balanced.

Here’s what CNN had to say about KÖGIDA (the Cologne version of PEGIDA), which had scheduled a rally in front of Cologne Cathedral tonight:

As it happens, tonight’s KÖGIDA demo had to be cancelled:

Anti-Islamist ‘Pegida’ supporters have had to cancel their appearance in Cologne, where thousands of demonstrators showed solidarity with migrants. However, thousands of anti-Islamists showed up in the city of Dresden.

20,000 residents in Cologne and neighboring areas gathered on the streets to demonstrate against the anti-immigrant movement, Pegida.

Overwhelming support for immigrants and asylum seekers in Cologne led to the Pegida demonstrators cancelling their appearance. Citizens in Cologne shouted out in jubilation, the sole goal of their demonstration being to prevent the Kögida- the name of the anti-Islam movement in Cologne- from marching in their city.

Rembrandt Clancy sends this summary of a local media report on Cologne that appeared earlier today, before the cancellation of the demo:

It is not just the lights of the Cologne Cathedral that were going out. The following is the substance of what appeared in the Kölner Stadt Anzeiger today:

Counter-protesters will attempt to block the PEGIDA demonstration: “They want to make it impossible for ‘KÖGIDA’ to move through the city”; hence the paper is announcing that an illegal action is to be undertaken.

The paper continues: The counter-protest is an alliance of 43 individual organisations, parties and associations “against racism”.

“Lights out for racists”

The lights of the Rhine Bridge, as well as those of other official buildings will not be turned on until after the demonstration. The slogan is “Licht aus”. The power company, “Rheinenergie”, by arrangement with the city, will shut down power to the Cologne bridges and other historical buildings until midnight. The evangelical “Antoniterkirche” (Antonite Church), which is in the inner city, will remain dark 18:30 to 21:00. The Cologne Chocolate Museum will also remain dark on Monday evening. The TÜV (Technischer Überwachungsverein or Technical Inspection Association) will turn off the light of its giant logo in Gremberg which is district in the eastern part of Cologne.

The Cologne Chamber of Commerce and Industry will darken the stairwell of their main building [the stairwell takes up about 25% of the side of the building] from 18:30 to 20:00.

The mayor, Jürgen Roters (SPD), made the following statement:

“With that Cologne takes a clear position, not only against irrational hatred of foreigners and exclusion, but with these measures gives a clear cause for potential participants in the demonstration to reconsider their stance and their attendance”.

He called upon the participants of the counter-demonstration as follows: “The people of Cologne should ‘send a clear message against xenophobia and exclusion’.”

Hat tips: For the video, Vlad Tepes; for the DW article, Fjordman.

19 thoughts on “The Anti-PEGIDA Media”