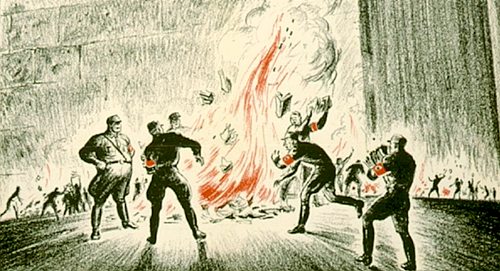 As mentioned here Tuesday night, an article by Clare Lopez was published earlier that day at the Gatestone Institute’s website and then immediately removed. Since Ms. Lopez had referred favorably in her article to Diana West’s book American Betrayal, and since Ms. West recently had anathema pronounced against her for that same book, it seemed that there might be a connection between the two events.

And indeed there was. Our suspicions were correct.

I just received this information from a source close to Clare Lopez:

In late August 2013, Clare Lopez, then a Senior Fellow at the Gatestone Institute, submitted an article for publication at the Gatestone Institute’s website. It was entitled “Recognizing the Wrong People”, and drew on the U.S. government’s 1933 formal diplomatic recognition of the USSR as described in Diana West’s book American Betrayal to form an analogy with the U.S.’s present day recognition and/or support of other fundamentally-anti-American entities, such as the AQ/MB-dominated rebel and opposition forces in places like Egypt, Libya, and Syria.

As with all of Ms. Lopez’ previous articles, this one was well-received by Gatestone’s editor, Nina Rosenwald, who praised it as “so far-sighted.” The article was duly published the morning of Tuesday 3 September 2013 at Gatestone and was sent out to an email list of subscribers. Sometime shortly after that, however, it was pulled from the website, with no notice or explanation.

The real shock came the following morning, though, on September 4, when Ms. Lopez received an email from Nina Rosenwald notifying her that her relationship with the Gatestone Institute had been terminated at the request of the Gatestone Board of Directors. On September 5, Ms. Rosenwald confirmed in an email sent to Ms. Lopez and others what some had already suspected, that her firing was due to her “choice of books to promote…,” a clear reference to Ms. Lopez’ citation of historical events from Ms. West’s book. Although Ms. Lopez also had cited about the same 1933 events to a second book, The Great Terror: A Reassessment, by Robert Conquest, for some reason, that reference did not seem to pose any issues for the Board. Only Ms. West’s book about the very same events seemed to irritate the Board, whose recently-appointed Chairman is former UN Ambassador John Bolton.

It would seem that the legacy of Stalin lives on. The anti-anti-communist movement is alive and well in 21st century America, and so are the vicious public smear tactics of personal vilification to which Diana West has been subjected.

For shame, for shame.

Clare Lopez has not yet been entirely airbrushed out of existence at the Gatestone Institute. Her author archive is still available at the website, and below is a screen cap of her bio, in case it disappears down the same memory hole as did her article (or Mark Tapson’s favorable review of American Betrayal at FPM, for that matter): 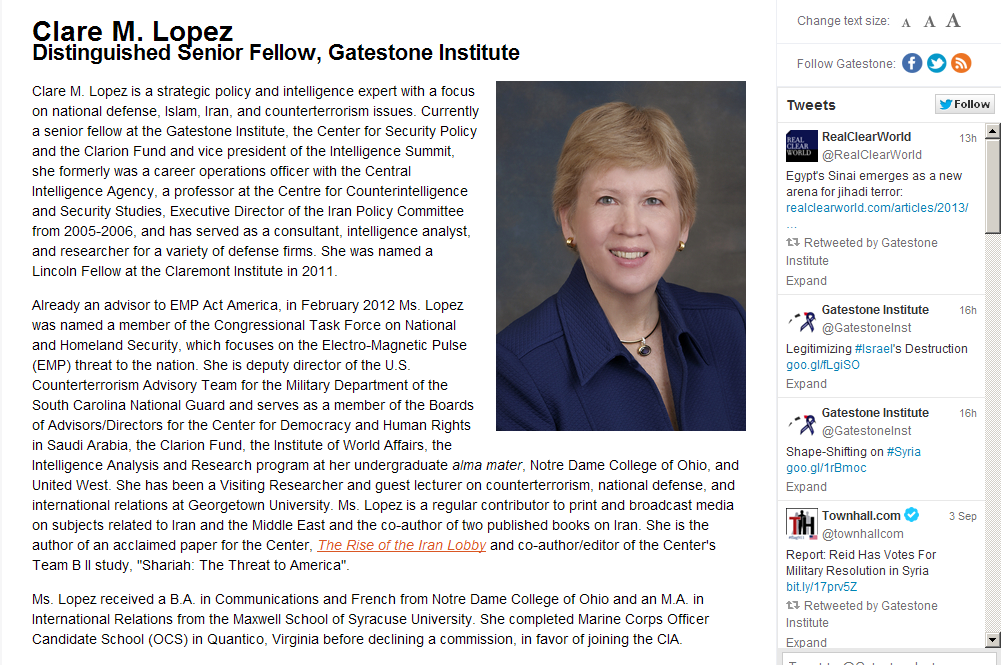 A text version of the bio:

Clare M. Lopez is a strategic policy and intelligence expert with a focus on national defense, Islam, Iran, and counterterrorism issues. Currently a senior fellow at the Gatestone Institute, the Center for Security Policy and the Clarion Fund and vice president of the Intelligence Summit, she formerly was a career operations officer with the Central Intelligence Agency, a professor at the Centre for Counterintelligence and Security Studies, Executive Director of the Iran Policy Committee from 2005-2006, and has served as a consultant, intelligence analyst, and researcher for a variety of defense firms. She was named a Lincoln Fellow at the Claremont Institute in 2011.

Already an advisor to EMP Act America, in February 2012 Ms. Lopez was named a member of the Congressional Task Force on National and Homeland Security, which focuses on the Electro-Magnetic Pulse (EMP) threat to the nation. She is deputy director of the U.S. Counterterrorism Advisory Team for the Military Department of the South Carolina National Guard and serves as a member of the Boards of Advisors/Directors for the Center for Democracy and Human Rights in Saudi Arabia, the Clarion Fund, the Institute of World Affairs, the Intelligence Analysis and Research program at her undergraduate alma mater, Notre Dame College of Ohio, and United West. She has been a Visiting Researcher and guest lecturer on counterterrorism, national defense, and international relations at Georgetown University. Ms. Lopez is a regular contributor to print and broadcast media on subjects related to Iran and the Middle East and the co-author of two published books on Iran. She is the author of an acclaimed paper for the Center, The Rise of the Iran Lobby and co-author/editor of the Center’s Team B II study, “Shariah: The Threat to America”.

Ms. Lopez received a B.A. in Communications and French from Notre Dame College of Ohio and an M.A. in International Relations from the Maxwell School of Syracuse University. She completed Marine Corps Officer Candidate School (OCS) in Quantico, Virginia before declining a commission, in favor of joining the CIA.

So these are the credentials of the woman who was fired for writing favorably about a book that someone else disapproves of. A scholar of her quality and expertise had to be suppressed, not just by having her article pulled, but by losing her status as a senior fellow.

Gatestone is a private foundation. It is fully within its rights to exercise editorial discretion and terminate any of its fellows as it sees fit. Front Page Magazine may also claim the same prerogatives vis-à-vis its own articles.

Still, one cannot help but observe the sheer juvenility of such behavior. These people are intelligent, well-educated adults — what prompts their descent into junior-high style bullying? Not just incompetence, but maliciousness. What’s going on here?

The impulse to suppress what someone else has to say, using any and all tactics available, is a totalitarian one.

The ferocious personal attacks on Diana West emerged from numerous quarters at more or less the same time, which suggested a concerted effort to apply Saul Alinsky’s Rule #12 — referred to in another context as “the politics of personal destruction”.

It seems that no matter how far to the “right” an old Stalinist moves, he still carries his own private Lubyanka around with him, ready to be dusted off and reoccupied whenever the occasion warrants.

67 thoughts on “The Totalitarian Impulse”