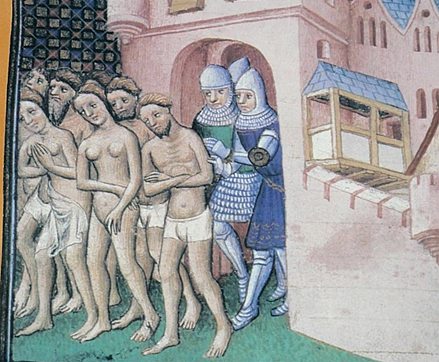 In the late 12th and early 13th centuries a splinter sect of Christianity became popular in the Languedoc region of Aragon, in what is now France. The movement is known to historians as the Albigensian Heresy, and its adherents are often referred to as Cathars, although it is doubtful whether they used that term to describe themselves. They were persecuted and eventually crushed by the Church of Rome under the leadership of Pope Innocent III. The dénouement was ugly and bloody, as was the case with most religious conflicts in medieval Europe.

From the perspective of the established Christian Church, Albigensian doctrine was definitely a heresy. It was an attempt to resolve what is nowadays known as “the problem of evil”, and the Cathars accomplished this through theological dualism, by positing the existence of two deities, a good one (God) who created the spiritual realm and heaven, and an evil one (Satan), who created the Earth and dross matter. The two deities were in constant battle with one another, and would remain so until the End of Days.

However, it wasn’t their doctrine that made the Albigensians dangerous, it was their political impact. Some local political leaders supported the Cathars, and dissident bishops found it expedient to back them as a foil against Rome. The popularity of the sect sealed its fate, and the Roman hierarchy eventually regained full ecclesiastical control of southern France.

Although it is only figuratively bloody, the current uproar over Diana West’s book American Betrayal reminds me of the reaction to a medieval heresy. There is no room for gentlemanly disagreement: anything that is viewed as an incorrect interpretation of historical events must be ruthlessly exterminated.

Today’s installments in the ongoing drama showed no signs of any return to civility regarding the book. The most prominent of the less-than-courteous reviewers is Conrad Black, who in NRO and The New York Sun referred to Diana West as a “right-wing loopy” exhibiting “jejune dementedness”, among other epithets. Mr. Black provides a long discourse on the history of the Second World War, but it remains unclear whether he has actually read American Betrayal, or whether he simply gleaned snippets about it from reading earlier denunciations of the book by some of its prominent critics.

Ms. West has responded to this latest salvo, also at NRO. Numerous other attacks on the book appeared today, some of them nastier than Mr. Black’s, by various writers from the “mainstream” Right as well as from the Left.

Thanks to Ronald Radosh and David Horowitz, Ms. West’s book has become so controversial that more and more people are airing their opinions about it, both positive and negative. This cannot help but increase the book’s sales, so we owe a debt of gratitude to Front Page Magazine.

One must assume that the vicious invective coming from the book’s detractors is a sign that this is indeed a political issue, just as the heresy of the Cathars was a political issue. Powerful people feel they have something to lose, and their vituperation is a sign of their desperate determination to hang onto it. What “it” might be — money, social position, academic standing, the respect of one’s peers — is hard to determine. But there’s little doubt that what we’re witnessing is a struggle to defend crucial turf.

Another sign of the heavy political baggage involved is the fact that since the first barrage was launched by Ronald Radosh last week, no prominent conservatives — what I would term “celebrities”, if conservatism had such creatures — have stood up to decry the ad hominem attacks against Diana West by people who have never read her book.

In contrast, ordinary people are standing up and saying that Messrs. Horowitz and Radosh are wrong, and saying it “to their faces” in the comments section on Front Page and other venues. These “little people” must have nothing to lose, because they are fearless about speaking out.

But prominent people… Well, that’s another matter. They stand to lose [fill in the blank here — funding, a seat on the board at Heritage, being invited to make an appearance as a talking head at Fox News, being allowed to publish at prominent sites, having their own books recommended by orthodox reviewers, etc.], so they don’t stand up. They don’t let themselves be counted as opposing the personal attacks on and vilification of a colleague.

The only conceivable explanation for their behavior is fear.

I’m appalled that none of these well-known conservatives is willing to stand up, suck in his gut, throw back his shoulders, and say, “Diana West is a diligent researcher who simply followed investigative leads to reach unpopular conclusions. Treating her this way is WRONG.”

Surely some of them are close enough to retirement to actually say this?

But no: they must preserve their cherished positions in the pecking order of prominent right-wingers. Better that Diana West should go to the stake.

It’s pathetic that Gates of Vienna, of all places, has to be the front line of defense for Ms. West. We are less than a microbe in the conservative ecology. Where are the lumbering dinotheres, for crying our loud?

There is a sad lesson to be learned here, and it has nothing to do with whether Diana West is right or wrong about any particular conclusions she draws. A larger battle is being fought, but much of it is occluded from public view, and not available for scrutiny by the little people.

Dr. John Earl Haynes is a noted historian and expert on American communism and Soviet espionage in the USA who has written numerous books and articles on the topic, often in collaboration with Harvey Klehr. He sent us an email earlier today with a link to his latest piece, “Was Harry Hopkins A Soviet Spy?”:

In view of Julius O’Malley’s kind remarks about our work in the course of his posting about Radosh, West, and Harry Hopkins, I bring to his attention Klehr’s and my post on the issue at FrontPage Mag.

Professor Hans Jansen, the Dutch expert on Islam and sharia who is well-known to Gates of Vienna readers, gave the American Betrayal a five-star review:

We all are too busy and have too many things to do. Nevertheless, this book is obligatory reading, not only for Americans, for European as well.

I’m sure we will have more on all this brouhaha later. Unfortunately.

Update: Diana West sends this comment from Professor Hans Jansen, which he gave permission to publish:

The polemics against your Betrayal have a familiar smell: the masters of the guild get angry when someone less worthy than they are ventures into the orchard in which only they are privileged to harvest. The harvest the outsider brought in, they ritually burn.

48 thoughts on “Banishing the Cathars”