As reported here last night, Diana West has written a three-part rebuttal of Ronald Radosh’s review of her book American Betrayal. The first part was published yesterday at Breitbart. Part Two will be published either later tonight or tomorrow, and will also appear at Breitbart.

Below is a summary of the rebuttal written by Ms. West for Gates of Vienna. 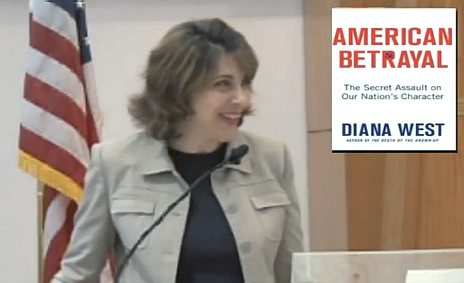 Rebuttal: The Summary
By Diana West

What happens when calumnious charges appear against oneself and one’s new book, and an acid-hot controversy ensues? I have been told that I should thank my detractors for elevating my profile. Wise counsel told to me leave no rock or pebble unturned in rebuttal.

And so I haven’t.

Those charges against my book, American Betrayal, first appeared in a 7,000-word review at Frontpage Magazine. In response, I have completed a rebuttal of some 22,000 words; it is running this weekend in three parts at Breitbart.com.

The review — better described by its author, Ronald Radosh, as a “take-down” — sprouted a series of copycat pieces at Pajamas Media, The American Thinker, NRO and elsewhere.

Radosh himself wrote four more pieces about my book.

Frontpage Magazine editor and “free speech” activist David Horowitz (who pulled a positive, first review of American Betrayal off the Frontpage website) has now published three attacks himself. He went so far as to write: “She should not have written this book.”

When does anyone ever say that?

More amazing than anything, though, is that none of the people joining in this continuing two-minute-hate actually seemed to have read my book (two people admitted this in print). That might even include the reviewer Radosh.

In Radosh’s introduction alone — where cognates of “conspiracy” repeat ten times and “McCarthy” five — I identify and refute more than 20 falsehoods about myself and my book. (This is in Part One.) I have to wonder: Did he read the book? In Parts Two and Three, I lay out several Radosh modes of attack which repeat throughout the rest of the review, which is divided into five sections. I thoroughly dissect each section, highlighting literally dozens of erroneous charges:

Along the way, I deal with all manner of personal smears that impugn my credibility as a writer by falsely charging that I consistently mishandle and even abuse evidence.

Indeed, after having to fend off these unjustified and unjustifiable attacks on my credibility, I found this recent public statement by David Horowitz of particular interest: “Well-designed attacks on an opponent’s credibility can overpower well-crafted messages.”

For readers who think 20,000-plus words sounds like more than they have time for — believe me, I understand — below are a few examples of what I am talking about.

Things That Are Not In My Book

Things Radosh Says Should Be In My Book — And Are!

Another instance in which Radosh exaggerates a fact in American Betrayal and attacks the exaggeration: Regarding a 1998 academic paper that matched FDR’s top aide Harry Hopkins with the code-name “19” in a KGB cable, Radosh writes: “The identification of Hopkins as Agent 19 is the linchpin of West’s conspiracy case.” (There he goes again, repeating the word “conspiracy.”)

“The linchpin”? In fact, my discussion of this paper identifying Hopkins as “19” is limited to two pages of American Betrayal, which is a 403-page book! Harry Hopkins is mentioned on 107 pages. So much for “linchpin.”

Worst of all, though, Radosh calls all of my book’s arguments “groundless.”

It is a fact that there are 944-plus endnotes in American Betrayal, so it is inconceivable that my arguments could be characterized as “groundless.”

In fact, the only thing “groundless” here is Radosh’s review. But don’t take my word for it. Read my full rebuttal.

Even better, read American Betrayal and judge it for yourself.

21 thoughts on “Rebuttal: The Summary”