Twelve years after the events of September 11, 2001, Fjordman has some personal reflections on that awful day and all that has occurred since. 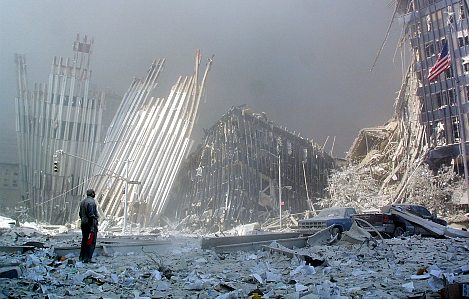 It’s been twelve years since September 11, 2001, when a group of Arab Muslim Jihadist terrorists murdered thousands of unarmed civilians on American soil. A lot has happened since then. Perhaps the single most positive development is that millions of ordinary people in Europe and the Western world are waking up. Many are now a lot more aware of the Islamic threat than they were in 2001.

The single most negative development is that this has so far not changed the outlook and policies of Western governments, other than in mostly cosmetic ways. The divide between the common people who cherish their nation and culture and the ruling elites who want open borders no matter the cost is growing wider throughout the Western world. It is threatening to become a chasm.

Mass immigration, including Muslim immigration, continues at breakneck speed. The attitude of the ruling elites and Western mass media towards everything Islamic is as suicidal as ever. If anything, fear and self-censorship concerning issues related to Islam and Islamization are more widespread now than they was just a few years ago.

I’ve been told that I am more “radical” now than I was a decade ago. Others may judge whether this is the case, but if there is any truth to it, it is only because I respond to real-life events.

Now that my true identity is known, I can report that on September 11 2001 I was living in Egypt as a student of Arabic language at the American University in Cairo. I was never more than mediocre in Arabic, and my Arabic skills are now quite weak, since I haven’t practiced that language for years. Yet I still learned a lot about the local attitudes, culture and religion from living in the Middle East.

It is simplistic to suggest that is was a single event than turned me against Islam. After exposure to Arabic-Islamic culture, both through living there and through my studies, I was already growing more skeptical of Islam before September 2001. There were probably several dozen separate events plus self-studies that made me grow even more skeptical over the next few years. I also learned a lot from working in the Palestinian territories and spending some time in Israel. But 9/11 certainly accelerated something that was already underway in my mind. Living in the biggest city in the Arabic-speaking world at that moment was an eye-opener.

As I’ve stated in the past, what shocked me the most was not that quite a few of the local Arabs (though by no means all) were openly happy about the attacks. I already knew that there is a lot of anti-Western hatred among Muslims in many countries. What shocked me the most was the extent to which Western mass media tried to downplay or hide this simple fact. This wasn’t just true of a single newspaper or a single country, but represented a wider trend throughout the Western world.

I was left with the impression that we might be able to handle the Islamic threat and other threats in relatively civilized ways if most people were only presented a truthful and unpolished version of reality by our media. Yet far too often this is not the case. I became convinced that the bias of our own mass media and the dysfunctional Globalist and Multicultural ideology of Western ruling elites are our main problems, and this conviction has only been strengthened since then.

It’s disturbing that more than a decade later the Western ruling elites seem utterly incapable of learning form their own mistakes. Western military intervention and attempts to spread “democracy” in Iraq have cost a lot of Western blood and money. The main result of this has been the ethnic cleansing of local Christians and other non-Muslims, infighting between various groups of Muslims, and a never-ending flow of refugees to Europe and North America.

Whether in Iraq, Libya, Egypt or Syria, Western governments seem always to support radical forces and champion the ethnic cleansing of Christians. And on every such occasion, Western intervention triggers a flood of mainly Muslim refugees to Europe and North America that the same Western elites tell us we must let into our countries. In essence, the Western ruling elites are supporting the Islamization of both the Middle East and Europe. Whether this is done by design or just by plain stupidity and ideological blindness is hard to determine, but this is nevertheless the actual result.

Some of us were unenthusiastic about the so-called “Arab Spring” from the very beginning. As usual, we have been proven right. Also as usual, we get little credit for our foresight. Instead, we hear accusations that we are “Islamophobic extremists” from the very same people who have been wrong time and again.

In 2011, when President Obama and his administration betrayed President Hosni Mubarak and supported the Muslim Brotherhood in Egypt, the US Government openly stabbed a loyal ally in the back and promoted sworn enemies of the USA. Who wants to be allied with a country that punishes its friends and rewards it enemies? This is basic human psychology at kindergarten level, yet even that seems to be too much for the Western elites these days.

Predictably enough, two years later the Obama Administration is almost universally despised by all groups in Egypt, from the Coptic Christians who are now being persecuted, through the secularists to hard-line Muslims who will always hate the “Great Satan.”

Having lived in Egypt myself for a while, I would maintain that Hosni Mubarak was probably the best ruler that one could realistically hope for in a country such as Egypt. Yes, he was probably corrupt, but so is virtually any Middle Eastern leader. He was also a dictator, but he was a secular dictator who was not personally sadistic or cruel by regional standards. He kept the peace with neighbors such as Israel. He held the most radical Muslims in check, provided at least some degree of security for the local Christians and maintained a minimum of economic stability for the general population. In a place like Egypt, with a growing population and many radical Muslims, it is hard to achieve much more than that.

In the case of Mubarak vs. the Muslim Brotherhood, the choice should therefore have been easy. It was more difficult in the case of the Libyan dictator Muammar Gaddafi. He was a cruel man who did sponsor Jihadist terrorism, but he had ironically largely stopped doing this when Western governments decided to support his overthrow.

The same thing can be said of Bashar al-Assad, the President of Syria. I don’t particularly like him. Hardly anyone does. His ties to organizations such as the Iranian-backed terror group Hezbollah are well-known. Nevertheless, some of the alternatives are even worse. It is known that many of the so-called opposition groups in Syria are militants Jihadists. Some of them have ties to the terrorist network al-Qaida. Even certain Western media outlets have reported this, as well as the fact that the CIA and other Western agencies have supported these rebel forces with arms.

I have been accused of being a professional pessimist. Yet, looking back, I have to admit that even I continue to be amazed by the sheer stupidity and ideological madness of the Western ruling class.

Twelve years after 9/11, the USA has a pro-Islamic President who supports the Muslim Brotherhood. That’s more than bad enough. What’s worse is this: On September 11 2001, Jihadists from the al-Qaida terror network hit the US mainland and killed thousands of people. On September 11 2013, groups with al-Qaida ties receive backing and even arms from Western authorities in countries like Syria.

What has twelve years of the “War on Terror” actually brought, apart from some extremely costly wars in Iraq and Afghanistan that have achieved very little? The few remaining Christians in the Middle East are rapidly being wiped out.

Muslim immigration to Europe and North America continues as before. The pro-Islamic President of the USA promotes the Muslim Brotherhood and similar groups. And Western governments intervene on behalf of al-Qaida-infiltrated forces in Syria.

Twelve years after 9/11, al-Qaida have become our allies. Western governments provide them with support, even with guns. That is an outcome that I could not have imagined as I watched the TV images in Cairo in 2001, yet this is now the reality.

The simple fact is that the War on Terror cannot be won because it was waged against the wrong enemy. You cannot wage a war against terrorism, which is merely a tool. This is a war against Jihad, sharia and Islamic expansionism. There is no point in trying to promote “democracy” in the Middle East.

We should instead try to prevent the spread of Jihad and Islamic sharia laws to the Western world. Until the Western ruling elites can be forced to realize this, we will continue to lose, and the Islamization of the West will continue.