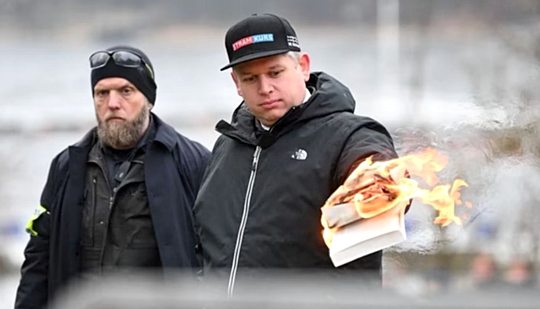 Well, it looks like Rasmus Paludan has single-handedly kept Sweden out of NATO. That’s no mean feat. Depending on how serious the Swedish government is about joining NATO, we may soon hear Prime Minister Ulf Kristersson mutter: “Who will rid me of this turbulent Islamophobe?”

(In case you missed it, yesterday Mr. Paludan burned a Koran under heavy police security in front of the Turkish embassy in Stockholm.)

The Turkish nationalist MHP party, which President Erdogan depends on in order to get Sweden’s NATO application through parliament, is now saying a definite no to bringing the Nordic country into NATO. The reason is the Koran burning that took place at the Turkish embassy today.

“The Swedish government’s decision to allow a degenerate Danish politician to burn the Koran in front of the Turkish embassy is not only a scandal, but also a clear provocation and an embodiment of barbarism and vandalism,” Devlet Bahceli told Anadolu.

Devlet Bahceli holds 48 seats in the Turkish parliament and – like so many other things – is often described as a “fascist” in the Swedish media.

“Sweden’s NATO application will not be approved by our parliamentary group under these circumstances. It would be a betrayal of our religion, our language and our goals for Turkey’s development in the first part of the 21st century,” he further says.

Bahceli says Sweden must correct this mistake by apologising to the Turkish and Islamic communities.

“It is offensive to have political and diplomatic relations at all with countries that are hostile to our national and moral values, and then it is out of the question to join the same NATO alliance as them,” he says.

“The Muslim Turkish nation will not tolerate this and will not be fooled by various outbursts,” he says, adding that the assessment is now clear.

While the Koran was burning, several other demonstrations, both for and against Erdogan, and against Sweden’s NATO membership, took place in Stockholm. Many thanks to Gary Fouse for translating this article from Dagens Nyheter:

Demonstrations for and against NATO application and Turkey

Several demonstrations connected to Turley and Sweden’s NATO application are being held in Stockholm on Saturday afternoon. Police have many personnel out in the town, but so far no reports of disturbances.

At North Ban Square, hundreds of demonstrators gathered to protest against the Swedish application to NATO. The demonstration was organized by the Kurdish Democratic Community Center, and among the participants was the Rojava Committee, the group that hung an effigy of Erdogan at Stockholm’s city hall last week. 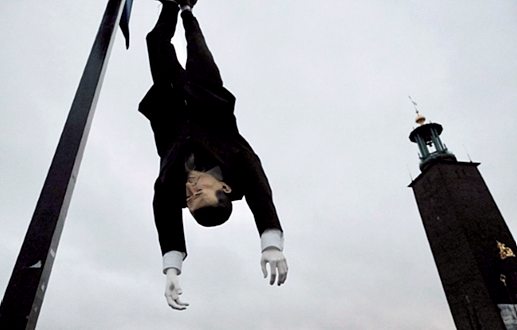 The atmosphere was calm, and many demonstrators waved red-green-yellow flags of Kurdish organizations, such as YPG and YPJ. Slogans were critical of both Turkey and Recep Tayyip Erdogan and against NATO. Those who gathered chanted, among other things, “Erdogan upside down — No to NATO, yes to peace.”

“There are a few different reasons why people are here, but I am here to show displeasure with the NATO application. I think it is unfortunate that there is too much focus on Erdogan, because this issue is much bigger than that,” she says.

Nawzar Jabbar is on the scene with his family. He says he is taking part in the demonstration to show solidarity with Kurds in Syria and to show displeasure with the handling of the NATO application. He thinks that Sweden is conceding too much to Turkey, and that it was wrong to lift the weapons embargo against the country.

“Non-alignment has benefitted Sweden, and we should not join NATO. It is not just democracies that are in NATO, but also dictatorships and rogue states, not the least of which is Turkey,” says Nawzar Jabbar.

When the demonstrators left North Ban Square to go to Citizens’ Square, they all stepped on a large picture of Turkey’s president, Recep Tayyip Erdogan.

Earlier, the right-wing extremist provocateur, Rasmus Paludan, held a demonstration near the Turkish embassy in Diplomatstaden [Stockholm’s diplomatic quarter]. Interest was cool, and when Paludan burned a copy of the Koran, it was mostly police and journalists who were watching.

In the same quarter, the pro-Turkish organization, Union of Turkish Democrats (UETD), held a demonstration in support of Turkey and President Erdogan.

The demonstrations have gone on peacefully, according to police.

“Everything has proceeded in accordance with the permissions granted,” says the police press spokesperson for the Stockholm region, Ola Österling.

Meanwhile, Turkish citizens are in high dudgeon over what they consider an insult to the world’s 7.78 quadrillion Muslims.

The article below, also translated by Gary Fouse, is from the Swedish state broadcaster SVT:

New protests in Turkey after Koran-burning in Stockholm

For the second day in a row, there were protests outside the Swedish consulate in Istanbul. The protesters are reacting to Saturday’s Koran-burning near the Turkish embassy in Stockholm. Demonstrations are now taking place in other locations in Turkey.

Protests outside Sweden’s consulate in Istanbul began Saturday evening when hundreds of people gathered to express anger over the Koran-burning outside the Turkish embassy [in Stockholm] earlier on Saturday. There were also protests held outside the [Swedish] embassy in Ankara.

The protests continued on Sunday. About 250 people gathered outside the Swedish consulate in Istanbul, the news bureau AP is reporting. In photos from the location, police are seen guarding the consulate’s entrance, and riot barriers are set up on the sidewalk outside the consulate.

“It was Islamist organizations that organized the protests. It is primarily religious conservative, believing Muslims who are taking part in the protests,” says SVT’s Turkey correspondent Thomas Thoren.

“An attack against all Muslims”

In the city of Batman in southeast Turkey, the protests are considerably more extensive. Thousands of persons, many carrying Korans, have gathered in the city’s streets.

“We strongly condemn this action. It is impossible for any Muslim to accept; it is an attack against all Muslims,” says one demonstrator in the city to the Reuters news bureau.

Another demonstrator in the city of Batman tells Reuters that it is obvious that people in Turkey and other nations are reacting to Rasmus Paludan’s act.

“Would Swedish authorities excuse such terrible actions as freedom of expression, in this situation?” he says to Dagens Nyheter.

The Swedish embassy writes in Sweden Abroad that continuing demonstrations can be expected outside the embassy in Ankara and the general consulate in Istanbul in the coming days.